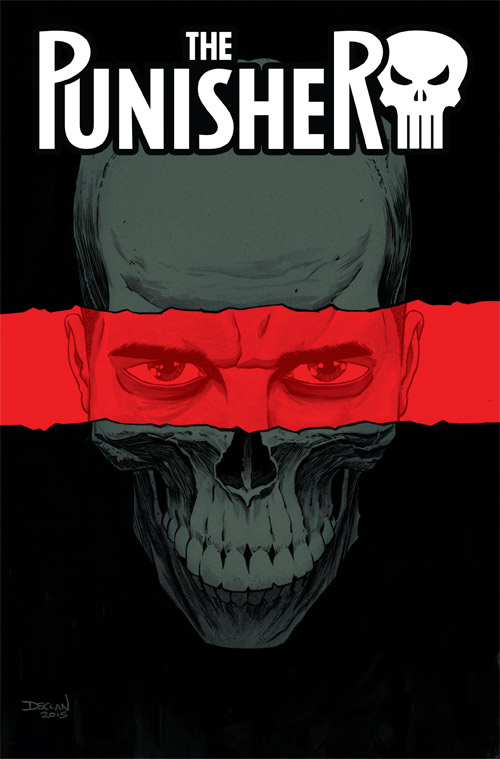 Who’s writing? That would be contemporaneity comic book luminary, Becky Cloonan. You may have heard of Cloonan due to her amazing work with Brian Wood in Demo, her artistic stint in the True Lives of the Fabulous Killjoys, and her current work on DC’s Gotham Academy. Oh, and something else worth noting: she was the very first female artist to draw the main Batman title, and she’s the first female writer to tackle the murderous mindset of Frank Castle. Okay, so that was two things worth noting. Let’s not dwell on it!

Who’s drawing? That would be Steve Dillon. Steve Dillon’s “been around,” cutting his teeth on legendary UK series Judge Dredd and Rogue Troopers. Transitioning to more American-published books, Steve Dillon is highly regarded for his work with Garth Ennis in the seminal Vertigo series, Preacher. And, it just so happens he did quite a few stints on the Punisher, once again supporting Garth Ennis’ scripts with his personality-filled pencils.

Okay; on with a few excerpts from the previously mentioned interview!

When asked about what they’ll be bringing to the table regarding this new Punisher series, and where the new series begins, Cloonan offered the first response.

“We are introduced to a whole new slew of characters, (both good and bad, helpful and harmful), as Punisher embarks on a road trip that will lead him into a blood-drenched deathscape that will challenge not only his physical strength, but his stamina, resourcefulness, and resolve as well. What he originally thinks is a drug ring turns into a web of corruption and murder, with a plot that permeates far beyond what he originally thought, even reaching into his past. ”

Dillon chimed in, adding, “I think Becky will be taking Frank to a few places he hasn’t been. The new characters I’ve dealt with so far are pretty cool. I’m having fun with them.”

When asked if their take on the Punisher is different than past incarnations, and if it’s linked to any previous Punisher continuity, Cloonan responded with, “I like to think that we leave the canon pretty much up to the reader! This is all new material that doesn’t rely on or negate any previous incarnations of the Punisher. We start fresh, so get on board. It’s gonna be a fun ride!

Dillon added, “Frank’s in his thirties for this one. He still has the look of someone who’s seen far, far too much though.”

Psyched for the new Punisher Comic Series? WE ARE! In fact, we’re going to slap on our Punisher Movie Symbol Tank Tops (because fightin’ makes you hot), and..uh…do something moderately unseemly. Like drink something very cold, very fast.