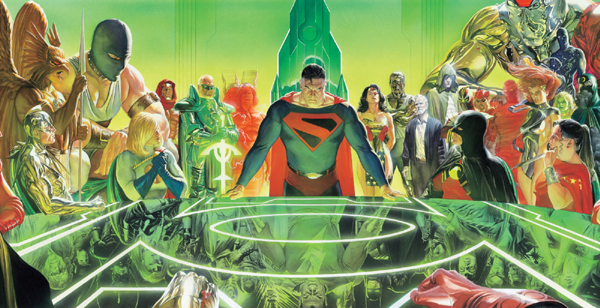 Welcome back to our look at the seminal Elseworlds tale, Kingdom Come. Today, we continue with our second Kingdom Come Retro Review: Truth and Justice.

When we last checked in, Superman had just come out of self-imposed exile to curtail the destructive ways of an unchecked generation of metas. The second issue of the series deals with the fallout of that return.

After hinting at the mass disappearance of most of the flagship heroes of the DC Universe in the first issue, Kingdom Come – Truth and Justice deals almost exclusively in getting the reader up to speed on these characters as battle lines are drawn in the battle for mankind’s future.

This series is 20 years old, so I assume you’ve read it (you should have!).  If not, SPOILERS TO FOLLOW!

Meanwhile, Batman has recruited a shadow network of operatives including Green Arrow, Black Canary and Blue Beetle. On the other side of the aisle, Lex Luthor has put together the Mankind Liberation Front with a cabal of villains and one misplaced hero.

This is the issue where we find out exactly what drove Superman into exile (hint – it involves the Joker and Lois Lane), we get the confrontation between Superman and Magog, and we see a handshake alliance between Batman and Luthor.

That’s a lot to take in, but the issue moves along at such a brisk pace, it doesn’t seem rushed at all.

Truth and Justice also contains one of my favorite sequences in the entire series.  Superman enters The Bar with No Name to recruit more metas to his side. Each panel of this sequence has to be examined in detail to find all of the Alex Ross homages filling the scene. Alcoholic Super Friend Marvin? Check. Fat Lobo? Check. Steve Miller as the Joker?  Check!

What really struck me as I reread this issue was how the underlying themes still resonate today. Fear-mongering and isolationism are both strong motivators in this dystopian world, and generation clashes create violence and strife. It was almost as if Waid could see the future and knew things weren’t going to get any better.

Truth and Justice is the pivotal chapter of Kingdom Come. It sets the stage for the titanic battle of the heroes promised on the collection’s cover.

War is coming and nobody will be safe.

NEXT MONTH:  UP IN THE SKY