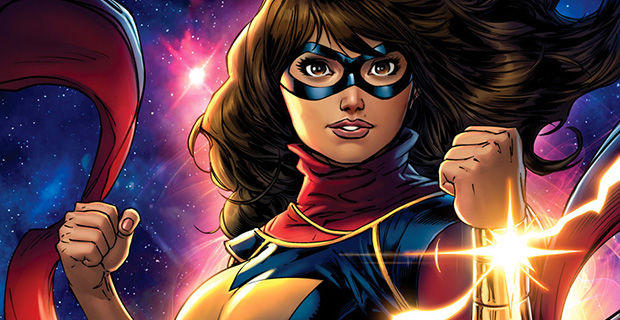 We’ve heard of books-on-tape but what about comic-books-on-tape? Well it looks like we will finally have a chance to cross that bridge with the new character iteration of Ms. Marvel! This official press release focuses on Kamala Khan and directly adapts the comic book into an audio-play, the first time this has been attempted in this form. They won’t let you read comic books at work but at least now you can maybe listen to it! They are even nice enough to give you a free try of it so if you aren’t doing anything and fancy yourself a fan of the character give it a whirl!

In case you missed all the excitement first brought to you at SDCC, we’ve got you covered…

You’ve seen and read about the highly acclaimed and inspirational new Marvel hero, Ms. Marvel. Now hear what she sounds like!

For the first time ever, GraphicAudio has adapted a Marvel character directly from the comics themselves. This is your chance to hear Ms. Marvel issues #1-5 as collected in the trade Ms. Marvel Vol. 1: NO NORMAL. Through cinematic music, a full cast of voices, digital sound effects, you’ll be immersed in this mega-hit comic book series like never before!

Kamala Khan is an ordinary girl from Jersey City – until she is suddenly empowered with extraordinary gifts. But who truly is the all-new Ms. Marvel? Teenager? Muslim? Inhuman? As Kamala discovers the dangers of her newfound powers and unlocks a secret behind them as well. Is she ready to wield these immense new gifts? Or will the weight of the legacy before her be too much to handle? Kamala has no idea either. But she’s here to stay!

Mixed in 5.1 Surround Sound DTS and in Stereo, MS. MARVEL is available at www.GraphicAudio.net/Marvel and via the FREE GraphicAudio Access™ Mobile App which allows customers to directly download titles on their Android or iOS smartphones and tablets.

Order Ms.Marvel Vol.1: NO NORMAL at www.GraphicAudio.net/Marvel today. CD formats and Marvel TPBs also available at comic shops and Inhuman-loving bookstores near you!