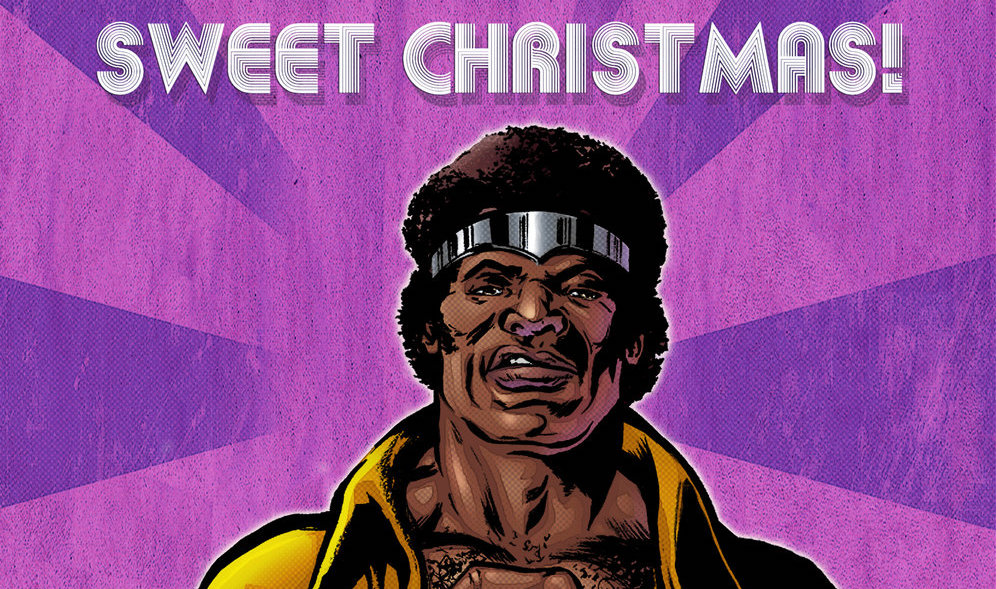 September is finally here, and with it comes the arrival of the Luke Cage series on Netflix! In just a few weeks, the binge-watching will begin yet again for Marvel fans. On September 30th, viewers will finally see the hero for hire, played once again by Mike Colter, lead his own program in a fight to save Harlem. In preparation for the inevitably epic show, The Source has compiled a list of the best times Luke Cage has said his signature line, “Sweet Christmas!”

Typically, the impenetrably-skinned character shouts his catchphrase when charging into battle, as seen below:

However, in Cage’s forty-four years of heroics, there have been some unavoidably strange, hilarious, awesome, and downright ridiculous instances where “Sweet Christmas” has appeared, especially in his early career. Given that the phrase came about as Cage’s way to curse without actually cursing at all, it comes up in a variety of circumstances.

1. In Front of an Explosion

This first, eruptive instance comes from 1976’s Power Man #29. As a filler story, Luke finds himself up against one of his strangest foes, Mr. Fish. Once a common thug, Mr. Fish stole whatever needed, but one day, after stealing an unstable isotope, he would never be quite the same. By mixing the isotope with himself in New York’s East River, he was transformed into a fearsome fish-man hybrid. In response, Mr. Fish used his new ghastly appearance to terrorize truckers, who responded of course by hiring Luke Cage. His first night on the job, Luke encounters this explosion, courtesy of Mr. Fish, and unsurprisingly utters his trademark tagline, “Sweet Christmas.”

2. In Bed with Jessica Jones

Arguably the biggest fangirl/fanboy moment in the Jessica Jones Netflix series, it was impossible for any viewer to hold their laughter in this wonderfully comedic moment. In a way, the image seems to sum up the relationship between Luke and Jessica perfectly. He is always amazed by her, but she always keeps her defenses up, pretending not to care. Somehow they make it work, and we, the fans, will always love it. No matter how they feel in the future of Marvel’s little Netflix universe, this will always be one of the best times Luke Cage said, “Sweet Christmas.” Not just because it was the first on-screen but because it made us laugh like never before.

3. At the Renaissance Fair?

Ten issues after Luke’s run-in with Mr. Fish, he once again found himself fighting an unusual foe in Power Man #39. Amidst a larger struggle with the villain, Big Brother, Luke struck a temporary truce to go after a more immediate threat, the medieval-themed Baron. As a man almost entirely committed to the Middle Ages, Luke finds him and his minions inside a castle but not without some modern convenience, in this case, a laser shooting lance. How could Luke have suspected that the Lancelot wannabe would have lasers? No one ever sees that twist coming, and from its ridiculousness, Luke utters our favorite line, giving himself and the Baron a place on our list.

Unfortunately for Luke, this use of his line is not from sharing a bed with Jessica Jones but still has our sides splitting. While it may not even be the full line, “Sweet Christmas,” it’s close enough and odd enough for us to include. Additionally, The Source could not help but empathize with Luke’s situation in the panel from Power Man and Iron Fist #65. Just before, the phone on Luke’s bedside table began to ring, startling him from sweet sleep to exclaim, “Christmas!” For all we know, he was dreaming about Christmas or maybe even a store that only sells yellow shirts. More likely, it was a censored version of a curse made by Luke out of shock. Either way, no one likes waking up to the answer the phone.

I know what you are thinking: “Is Luke chained or just tangled by his belt?” But this time, the chains are holding back a lot more than just his gut. Being trapped and chained in a coffin calls for a lot more than just Luke’s “Christmas” curse, but that’s comics. Like all heroes though, Luke does manage to escape this villainous trap, but not before saying that thing he always says. Rain or shine, in a coffin or a luxury plane, Luke Cage will always say some form of “Sweet Christmas” when he is surprised or really just at a lose for words.

In a Scooby-Doo type situation, Luke Cage is seen being attacked by a “vampire” on the cover of Power Man #26. Naturally, Luke has some choice words for his attacker, but oddly enough, he goes more alliterative, thinking “Sweet Sister” instead of “Sweet Christmas!” Although “Sweet Sister,” appears almost as much, it is not the focus of this list, yet when considered in context, this choice makes perfect sense: Vampires don’t celebrate Christmas! More importantly, they do not associate with Christian traditions, such as Christmas. Although it breaks Luke’s usual go-to phrase, in this circumstance it works well and earns its spot on this list just by being unusual.

For the last spot on our list, we broke the rules yet again, but we think you will find that it is worth it:

Despite Luke not shouting his usual catchphrase, The Source found it close enough and hilarious enough to share anyways! After becoming tired of playing a part in the background, Iron Fist just wants his chance to shine or at the very least appear to be an equal. Driven by dragon-like rage, Fist goes into attack mode, accidentally striking Ben Grimm aka The Thing. With a punch meant for Luke, Iron Fist holds nothing back, sending Grimm out of panel and off the page. However, in ducking, Luke whispers another version of his usual tagline, saying “Mama” instead of “Christmas,” but who can really blame him? If the fist of K’un L’un was coming for you, you’d cry for your mama too!

That’s our list! Be sure to keep checking back with The Source for more lists, breaking news, editorials, and reviews concerning all of your favorite heroes and villains!