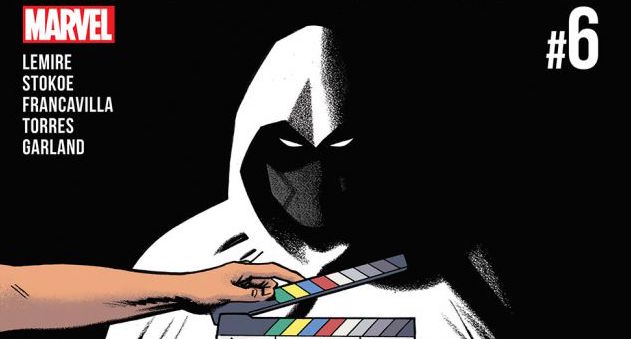 Although the “New Egypt” Storyline has been brought to a close, the repercussions are just beginning in the latest issue of Jeff Lemire’s mind-bending Moon Knight series.

Previously, Marc Spector was trapped in a mental hospital but managed to escape along with a group of his friends: Frenchie, Crawley, Gena, and Marlene. Yet escape was only the beginning. Back on the streets of New York, Marc discovered that the city had been taken over, buried in mounds of sand. To confront the evil before him, Marc suited up as Mr. Knight, but even with his many gadgets and abilities, nothing could have prepared him for what he found: Khonshu was leading the attack on New York. There, at the top of an immense pyramid, Khonshu, the Moon Knight’s constant guide and singular, metaphysical support system, revealed that he/it was responsible for everything happening to Marc; Khonshu attempted to rid his former “fist” of any and all remaining sanity.

Upon this discovery, Marc attempted to destroy himself, not allowing Khonshu to possess his body. However, Marc woke up under the identity of Steven Grant with Marlene. What follows is the continuation of this narrative in The Source‘s analytical Moon Knight #6 Review.

So Where Are We Now?

Well… That’s not the easiest question to answer. As stated before, in the aftermath of Khonshu’s betrayal, readers find Marc Spector under the guise of Steven Grant, the wealthy movie producer. However, as the comic proceeds, readers begin to wonder if Grant has any relation to Spector at all, mentally or existentially.

To begin, Lemire places readers on the set of Grant’s latest film, a Moon Knight film, but that’s only the beginning of the strangeness. After a cut being called on the scene, the man in the Moon Knight suit freaks out, storming off. As he is leaving, the director is shouting at him, “Marc, Marc… Just calm down,” causing readers to wonder if the story is still taking place in Marc’s head. More importantly, we wonder if Khonshu is still pulling the strings.

Down the Rabbit Hole

After leaving the set with Marlene, our new protagonist, Steven Grant, catches a cab. He and Marlene agree that he needs to go lie down before going to the film’s public relations event at Mercy Hospital. As they continue their conversation, the cab driver, presumably Marc’s street-level personality, Jake Lockley, interjects, “Mercy Hospital? You don’t want to go there. Trust Me.” It’s an eerie jab thrown between two people who should, in some way, recognize each other.

From there, the comic is taken over by Jake Lockley, and with this new protagonist taking the reins, readers catch the creative change in artist and artistic styles from earlier in the Moon Knight series. As Lockley drives through the underbelly of New York, he monologues until an unexpected visitor arrives on the page. Emerging from the shadows, Lockley sees Crawley! You know, THE Crawley who sold his soul to Anubis just a few issues ago. Together in the cab, Crawley recaps everything that has taken place in the series, which all sounds new to Lockley. In response, Crawley utters every reader’s fear, “But now I see you failed. You’re right back where you started aren’t you?” Angered and confused, Jake tries to respond with reason and rationale, but Crawley is sure he is still in the hospital and calls him Marc just before disappearing.

With the flip of another page, readers find themselves back in familiar territory: in Steven Grant’s apartment with him and Marlene. This time though, Steven seems just as confused as Jake. He begins to tell Marlene that he was in a cab somewhere with an old man, but she tries to reassure him, saying that it was only an anxiety-induced dream. But before leaving for the hospital, she reminds him to take his meds, and if they’re anything like before, they’ll probably dull his senses and his connections to his other personalities.

Next, readers find Steven Grant at the hospital, which looks exactly like the one from the beginning of Lemire’s series. As a bonus to any sleuth who has deduced this, the two orderlies who had abused Marc in the hospital before have reappeared as waiters, serving hors d’oveuvres. Steven does not recognize them at all, but the duo can’t help but notice his familiar face.

Enraged, possibly by his subconscious recognizing the hospital, Steven finds Marlene, demanding to know who threw this party in a mental institution. Confused by the very question, Marlene reminds him that it was HIS idea, as a way to destigmatize mental illness, especially since he had been a patient there. In shock, Steven leaves the party to be alone, but as he is leaving, he stumbles into another reality and another personality.

Finally, the readers finds themselves reunited with Marc Spector and even Frenchie, who had died earlier in the series. Oddly though, the two are dressed like space commandos, but before the reader can grapple with that, Frenchie is yelling at Marc to hurry. Together, the two board a crescent-shaped spacecraft and fly out of a moon hangar to fight — and I cannot believe I’m typing this — space wolves. Yeah… I don’t know.

From the evidence presented by Crawley, along with the presence of the orderlies, it appears the story is still taking place inside Marc Spector’s mind. Despite Khonshu’s apparent inability to rid Marc of his sanity, his plan hasn’t changed. In fact, it’s been advanced. To drive Marc truly insane, his personalities have been totally split, but given the “dream” connection between Steven Grant and Jake Lockley, coupled with Steven walking through a doorway into Marc’s moon battle, his consciousness must be flowing freely between each of them.

All in all, the series has not failed to keep interest. Readers are constantly challenged to think of how each part of the story intertwines and to look for the bigger picture.

Be sure to catch The Source‘s review of Moon Knight #7 next month along with our reviews of other series, TV shows, and movies!