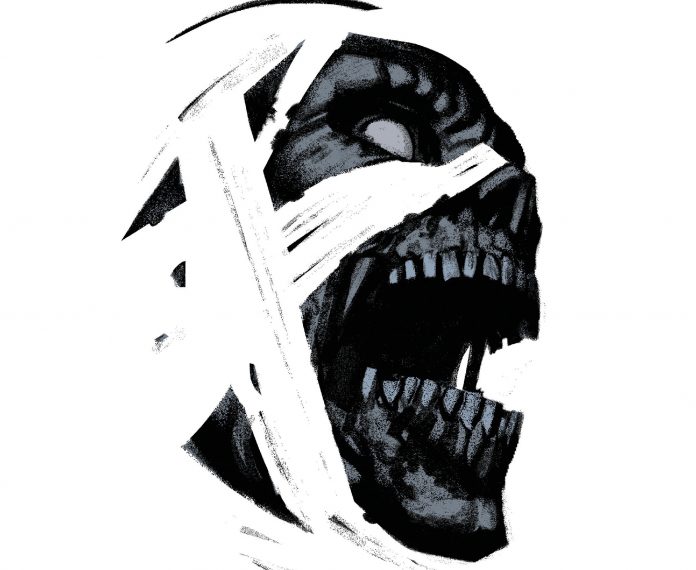 Years ago, Marc Spector died before a statue of Khonshu, the Egyptian God of the Moon. He was brought back to life to become the crime fighter known as Moon Knight. Throughout the years, his greatest foe has been his own mind, and more recently, it has gotten him into some trouble. Cornered in a mental institution or maybe in a transcendent trap run by Ammut the soul eater, the man behind the white sheet, Marc Spector, has been trying to escape since issue #1 of his new series. The only thing holding him back? His own mind. Has he finally lost it, or is he just being tricked? With the mind of writer Jeff Lemire guiding the series, Moon Knight is back again this month and he’s ready to attempt an escape. And because we’re nice, and because you care about Moon Knight as much as we do, we here at The Source are ready to tell you how it is in the SPOILER-filled Moon Knight #3 Review.

In the cliffhanger from issue #2, the readers last saw Marc as Mr. Knight with his fellow escapees confronted by a subway station full of mummies. As Marc prepares for the fight, he and Crawley, the old man of the group, reaffirm between themselves that they do indeed see mummies; however, Gena, one of the two women in the team, just sees orderlies from the hospital. Again, Lemire isn’t forthcoming about what’s happening. He wants to keep the truth hidden in the darkness without any moonlight to illuminate the facts. Yet for Marc Spector, the identity of these attackers are of no concern. All he knows is his need to fight and escape.

In the midst of the mummy melee, Marc is met by a familiar face filled with disdain and disappointment. Without warning, Dr. Emmet – the woman seemingly in charge of the mental institution – appears to thwart their plan. Once again though, while Crawley sees the doctor, Marc sees something entirely different. Behind some sort of mystical veil, Ammut the Soul Eater stands before Mr. Knight, surrounding him and his friends with mummies. In this time of crisis, Khonshu, the Egyptian God of the Moon and Marc’s guide, appears to show him an exit. In response, Marc demands his group make a break for the way out while he goes in for a few swings at Ammut. With the help of her loyal followers/orderlies, the three manage to inject Marc with an unknown serum, taking away his sight of the mysterious Egyptian world. Instead, Marc sees the doctor and her torturing orderlies again, standing around him in an underground subway station, devoid of mummies. For a moment, Marc cries in distress, questioning himself again, but with his faith in Khonshu Marc fights back and slips away into darkness.

In the blackout, Marc finds Khonshu, who is ready to give him all the advice he needs. On his knees before the god, Marc begs and pleads, needing guidance. In response to his pawn’s cries, Khonshu informs Marc again of how his mind is the key. Marc has always possessed a weak psyche, which made him Moon Knight. Therefore, Khonshu tells him, “Let your madness show you the way.” Opening his eyes again, Marc sees what appears to be the maze of an Egyptian tomb, once again playing on the line between fantasy and reality. With two parts left in the storyline, perhaps the fantasy is reality. Otherwise, what would be the point? Emily Dickinson’s famous poem “Much Madness is Divinest Sense” begged the question of what madness and divine sense truly are, and it seems that here, over one hundred years later, Jeff Lemire is playing with that again in a Moon Knight comic book. More on that later!

Eventually the group finds a way out thanks to Annubis, the Egyptian God of the Dead. Unfortunately, his help comes with a price: Crawley promises Annubis his soul despite Marc’s opposition. In the end, Crawley repays his hero, allowing the other members of their group to escape into New York City or at least a version of New York City, complete with a pyramid, flying dog-headed creatures, and even a ground covered with sand. Yet that price paid by Crawley is suspicious! Marlene, one of the two girls and a former lover of Marc, awoke from her comatose-like state just before Annubis’ arrival to say, “There will be a price.” She warned them, leading us to believe that Marlene may play a larger role later in Marc’s fight against this New Egypt.

In review, the story is working at multiple levels. The reader sees firsthand how Jeff Lemire plays on the concept of Marc’s sanity or insanity, possibly giving us an answer for the first time with Khonshu’s cameo. At the same time, the escape unfolds successfully despite the multiple obstacles and the loss of Crawley. Thankfully, the reader also sees how Lemire foreshadows his story and answers that glimpse of the future, which reassures us that any of our questions surrounding the series should be answered in the next two issues. For now, Moon Knight #3 is another great accomplishment in the series, drawn and colored beautifully by Greg Smallwood and Jordie Bellaire.