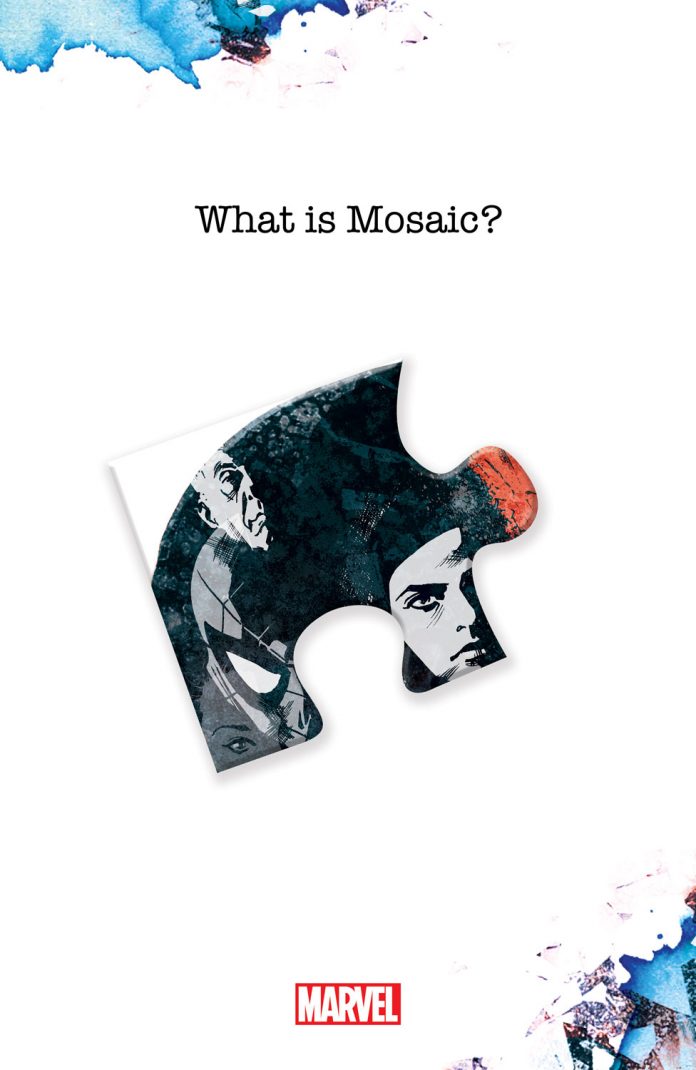 Do you recall my April 25th article detailing a very portentous – but not very informative – Marvel Press release consisting of 2 tiny puzzle pieces and the ominous question, “Who is Mosaic??” No? Well, you should certainly remember now since I just gave you the whole “story so far.” Anyway, we received 2 pieces of some incomplete art that may or may not have to do with a returning Jessica Jones comic series; that was a bit of speculation on my part. Thankfully, Marvel sent a few more pieces of the puzzle to help complete this annoyingly incomplete bit of promotional art. Take a look, and maybe we can figure out this Mosaic nonsense together.

1. Above is the second press release revealing a third puzzle piece. Obviously, I recognize Spider-Man. The others? Uh…..a little help? And this one asks, “What is Mosaic?”

2. Below is the third press release revealing a fourth puzzle piece. I recognize Iron Man, but…no one else.

3. Below is the fourth press release featuring the fifth piece covered in faces that look completely unremarkable to me. Not sure what the hell’s going on here. And now this one is asking, “Where is Mosaic”? Damn it! I was already stumped trying to figure out “who.” Now it’s a place and a thing?? AAAAH!

I realize I could be completely wrong about the connection to Jessica Jones. I mean, these pieces are showing quite a few people and a few notable superheroes. Is this some larger crossover event impacting the entire Marvel Universe? Or, is it still a Jessica Jones series, but one more closely tied to the larger Marvel tapestry? She has a kid with Luke Cage so she’s certainly not the lethargic, traumatized, insular drunk suffering alone in an undisturbed corner of the Marvel Universe. Maybe now, finally, she’s ready to step up, out, and into the superhero game again. What say you, gentle reader???