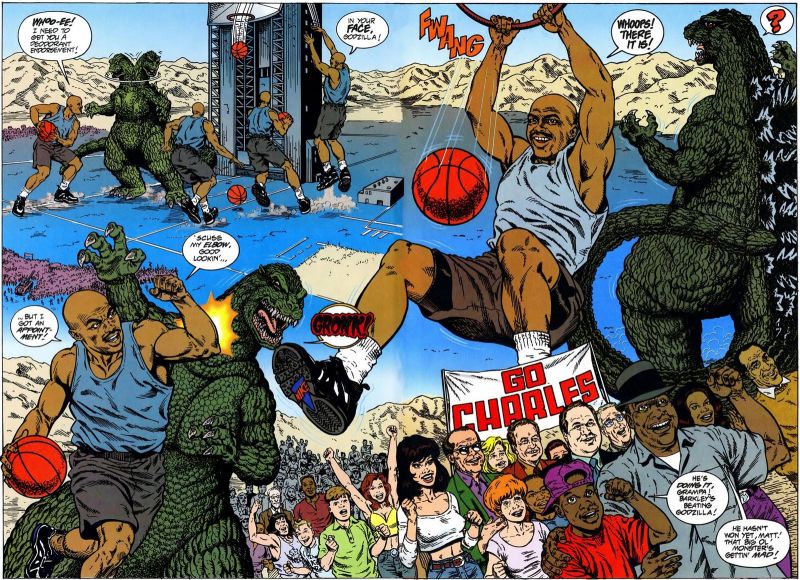 Who doesn’t love a good crossover? It’s always fun to see two characters team up or go toe to toe! Comics are the best place for many different kinds of crossovers to happen, even the ones you’d never expect. From weird match-ups to seeing two characters you never thought would meet, there’s a ton of bizarre crossovers out there. Anyway, let’s see just how insane it can get as we look at seven of the strangest comic book crossovers!

Kicking off this list is probably the tamest entry, and that’s really saying something! The famous swashbuckler Zorro finds himself face to face with the one and only Dracula! The idea of pitting Zorro against the prince of darkness himself is pretty insane on its own, since the two have almost nothing to do with each other. Strangely enough, that insanity pays off since this is actually a pretty fun crossover. It’s cool to see Zorro take on the Count in both a physical fight and a battle of wits, and both characters actually complement each other. If you’re interested, I recommend checking it out; it’s weird but in all the right ways!

If you can believe it, Superman once teamed up with the Nestle’s Quik Bunny in a one-shot comic! The Man of Steel and the mascot of Nestle’s Quik united to stop the evil plans of the Weather Wizard (shouldn’t he be bothering the Flash right now?)! The two managed to win the day through advertising the “super powerful” Nestle’s Quik! Yeah, it’s about as silly as you would expect.

Admittedly, this comic was aimed at a younger audience, since there were a variety of puzzles and other activities within the pages of the book. Still, having to see Superman partner up with a cartoon mascot for chocolate mix is just plain weird. What’s even stranger was seeing all the high-tech gadgets and vehicles the Quik Bunny had access to against Weather Wizard!! Somebody get that rabbit a Justice League membership card!

Hey! What’s even more bizarre than human-sized turtles that are also ninja? How about cows that are also cowboys?! Well, that was what the (un)popular series C.O.W.-Boys of Moo Mesa was about! Wouldn’t it be crazy if they teamed up with the Ninja Turtles? Actually, they did! SEVERAL TIMES!! In the pages of Tales of the TMNT, our favorite pizza-loving turtles teamed up with the lawmen of Moo Mesa (there’s a sentence you never thought you’d see). As crazy as it sounds, the two are actually so insane in concept that the story actually kind of fits! All we need now are the Biker Mice from Mars and the trifecta of crazy will be complete!

Now we’re getting into the reeeeeaaaaally strange stuff.

Based off a Nike commercial, this comic features NBA star Charles Barkley becoming a giant so he can take on the King of Monsters himself, Godzilla! If that wasn’t already weird enough, the comic has Godzilla and Barkley playing the world’s “biggest” game of Basketball, and ends with Godzilla training to go pro one day!

Congrats, you somehow managed to find a stranger Basketball-themed crossover than Space Jam and that one had included the Looney Tunes!! Weird in concept and execution, this has to be Godzilla’s silliest match-up ever! Though it does make me want to see what a Kaiju Basketball team would look like…

Spider-man is Marvel’s poster boy for the superhero crossover, teaming up and facing off with tons of different characters in and outside of the Marvel Universe! He’s had some weird encounters, but his strangest had to be when he stepped into the bizarre world of Ren and Stimpy! To do what, you may ask? Why, to go up against their bread-headed superhero, Powdered Toast Man! I did mention that this came from a very weird cartoon, didn’t I?

The idea of having this crossover alone is completely crazy and I have to wonder how the proposal meeting went for this. What follows is one of the most hilariously insane superhero fights to ever hit the printed page, as we see webs versus….toast (it’s as weird as it sounds). Much like the cartoon it’s based on, the comic delivers a lot of strange, zany humor and it’s actually really funny to see Spidey outside of his comfort zone. If you come across this one, I recommend picking it up. It’s as funny as it is insane.

Here’s a little question for you: what does the movie Mars Attacks have in common with the cartoon Popeye? Not a thing, but that didn’t stop IDW from making a crossover anyway!

In this comic, the Martians invade Popeye’s home in full force and it’s up to the sailor man and his friends to knock them right back to where they came from! Nope, you haven’t been reading this wrong, this is 100% real! Who could’ve predicted we were going to see Popeye open a can of Spinach-flavored whoop-@$$ on the Mars Attacks Martians?! Strange on all fronts, Mars Attacks Popeye needs to be seen to be believed!

When you’ve been around as long as Archie has, you’re bound to do a few crossovers. Sure, there are the ones you’d expect like Josie and the Pussycats or Sabrina the Teenage Witch, but there are a ton of really weird ones out there as well. In fact, because there are so many of them, I had to include all of them for this entry!

Archie once met the Ninja Turtles, who traveled to their dimension via-giant cow head (not even kidding)! Then there’s Archie meets the Punisher, where they have to team up to save Veronica from an evil Archie doppelganger! Yes, we’re talking about “that” Punisher, the Marvel character that kills criminals! There’s even an Archie meets the Predator, where Riverdale gets attacked by the vicious alien. But the gold medal for insanity has to be Archie vs. Sharknado! I think that last one speaks for itself.

If we’re judging by quantity and just how little the two parties have to do with each other, then Archie has got to be the king of strange comic book crossovers!

What’s your favorite weird crossover? And if you could create your own, who would be in it? Let me know below!

5 Reasons Why You Should Read ‘Dark Nights: Metal’