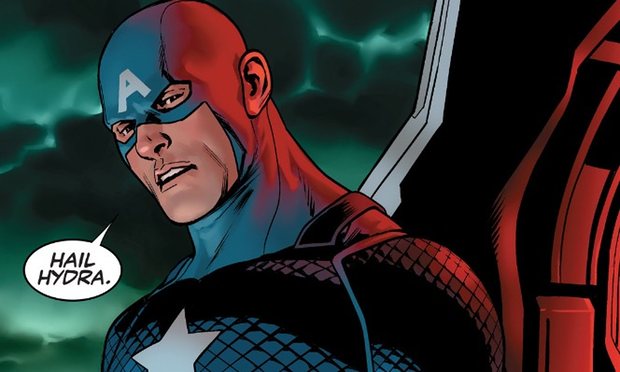 Remember that incredibly surprising, blood-boiling (but incredibly interesting) revelation in Captain America: Steve Rogers #1?? It regarded a bit of unseemly retconning realigning Cap’s previously unsullied allegiance to liberty and freedom!! Apparently, and unbelievably, Cap’s poverty-stricken family was approached, helped and embraced by Hydra, leading to Cap’s clandestine allegiance to, yes, HYDRA! AAGGH! Now, Marvel was very adamant about the validity of Captain America’s Hydra allegiance, stating that Cap wasn’t an LMD, a clone, or the victim of brainwashing due to a 37-hour Teletubbies marathon. However, in a very, VERY surprising turn, Marvel already revealed the instigating factor behind Cap’s HYDRA allegiance. And yes, it was kind of a gimmick.

What the HELL is Kobik??

Kobik was formed from the shards of various Cosmic Cubes, reality-bending devices that have fallen into the Red Skull’s hands more times than any self-respecting superhero should ever allow. Kobik, taking the form of a young girl, was utilized by S.H.I.E.L.D. to create a different kind of prison for repeat, super-powered offenders: a small, picturesque, mid-western town where each prisoner worked, lived, and contributed as a manufactured personality created by Kobik. Yep.

Wait. Where did these Cosmic Cube fragments come from in the first place??

Captain America: Steve Rogers #2 comes out with it: these were fragments from a cube once held by – that’s right – the Red Skull, and therefore still amenable to his nefarious influence. So, Cap has exposure to Kobik via the Pleasant Hill debacle, and is well within the influential sphere of Kobik, still under the influential thrall of Red Skull. Let the mind-f*ckery begin!

Check out the preview below for Captain America: Steve Rogers #2!

So..what do you think?