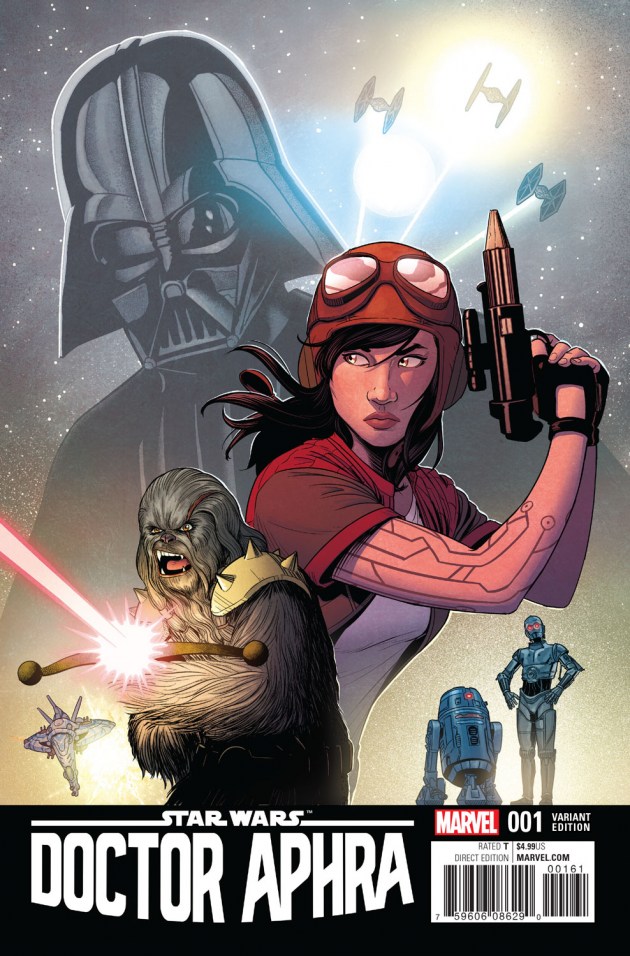 Gang, our Star Wars: Doctor Aphra #1 review is a little SPOILER-Y, so…check back with us after you’ve read the issue. Oh? Still here? Thank you!

Yeah, we’re waiting breathlessly for Rogue One: A Star Wars Story to hit theaters too, but let’s take a second to acknowledge that Rogue One isn’t the only awesome bit of Star Wars goodness debuting in December. The other Star Wars premiere event is a new comic series called Star Wars: Doctor Aphra, and really, if you are one of the millions of rabid fans awaiting Rogue One, don’t let Doctor Aphra slip under your radar.

For those of you that didn’t read Marvel’s Star Wars: Darth Vader (and really, what’s wrong with you), Doctor Aphra is a female space-archeologist that acted as a sort of special agent on behalf of Darth Vader. Aphra is a complex and corrupt character that has a smidge of altruism that usually complicates any mission she finds herself on. Aphra was so compelling in Darth Vader that Marvel and Aphra creator Kieron Gillen decided to shunt the not-so-good Doctor into her own regular series.

And really, it’s a damn compelling read. The book’s entire cast are dark reflections of other Lucasfilm icons. Aphra is like a spacefaring Indiana Jones, but instead of being a selfless keeper of history like Indy, Aphra is a greedy scholar who is not above theft and murder. Along for the ride are BT-1 and 000, two profane analogs of R2-D2 and C-3P0, and Black Krrsantan, a twisted version of Chewbacca. With all these shadowy stand-ins, Doctor Aphra #1 is a warped journey through the underbelly of the Star Wars Universe. It reads like a swashbuckling adventure, but really, the comic is a twisted heist thriller starring perverse versions of beloved sci-fi legends.

This debut issue serves as an introduction to Aphra and her partners and crime as Gillen effectively navigates new readers through this dark underbelly of the galaxy far, far away. We get some hints and clues about some upcoming storylines, but really, this debut issue is a balls to the walls primer to the character of Aphra and her complex and often twisted motivations. And it also has two droids killing lots and lots of people.

Gillen also serves up a fun backup with his Darth Vader artist Salvador Larroca that tells a tale of Aphra’s younger days, and it’s all a very exciting intro to a very differnet type of Star Wars tale. So, get ready for complex heists and lots of droid murder because Doctor Aphra is here, serving up a very different type of SW adventure that you’re not going to see anywhere else.