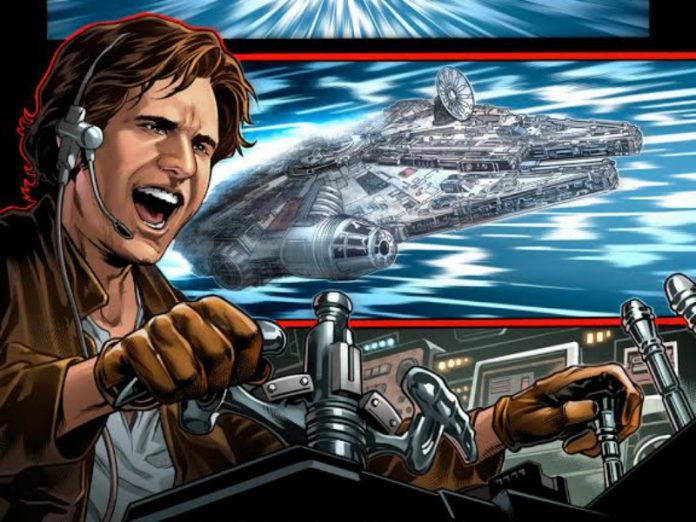 Check out Our Review [WITH SPOILERS] of Star Wars: Han Solo #1!

Before we delve into the story itself, holy Hutt-poop, can Mark Brooks draw Harrison Ford. Brooks’ Han Solo is effortlessly photo realistic. This guy is a killer Star Wars artist with a visual reverence for the iconic players and, man, is it fun to look at.

That being said, writer Marjorie Liu is just as adept narratively at navigating readers through the galaxy far, far away. Marvel’s Han Solo #1 is exactly what you want a Han Solo comic to be. Liu captures Solo’s voice and crafts a plot that might be predictable, but it is still a load of fun. Liu relies a little too heavily on exposition and overuses the expected Han and Leia banter, but her story holds together nicely and scratches every inch you want a solo Solo (heh) story to scratch.

The issue centers on Leia trying to convince Han to let the Rebellion use the Millennium Falcon to save three trapped Rebel intelligence agents trapped on three separate planets. Of course, Solo doesn’t let anyone but Chewie fly the Falcon so he aggressively turns down Leia’s request. Leia is reluctant to let Han fly the mission because the rescue will be conducted in the middle of a dangerous galactic race and the Princess is worried that Han will be more concerned with winning the race than saving the Rebels.

So daring rescue missions, an intergalactic drag race, and lots of clever banter. Yup, it’s a Han Solo story. It seems that Liu is deeply in love with the Han and Leia’s Echo Base corridor sequence from The Empire Strikes Back because she apes that moment again and again for about half the issue. But once Liu focuses on action rather than familiar character beats, the issue really starts moving.

Readers never get to actually witness the race in the first issue (de-com-press-ion) but the set up is solid and the characters are all comfortably familiar. I’m sure Liu will come up with some fun competitors for Solo as the race begins in earnest and I’m looking forward to seeing what happens next – mostly because I know exactly what is going to happen next and seeing Solo be Solo is always a blast.