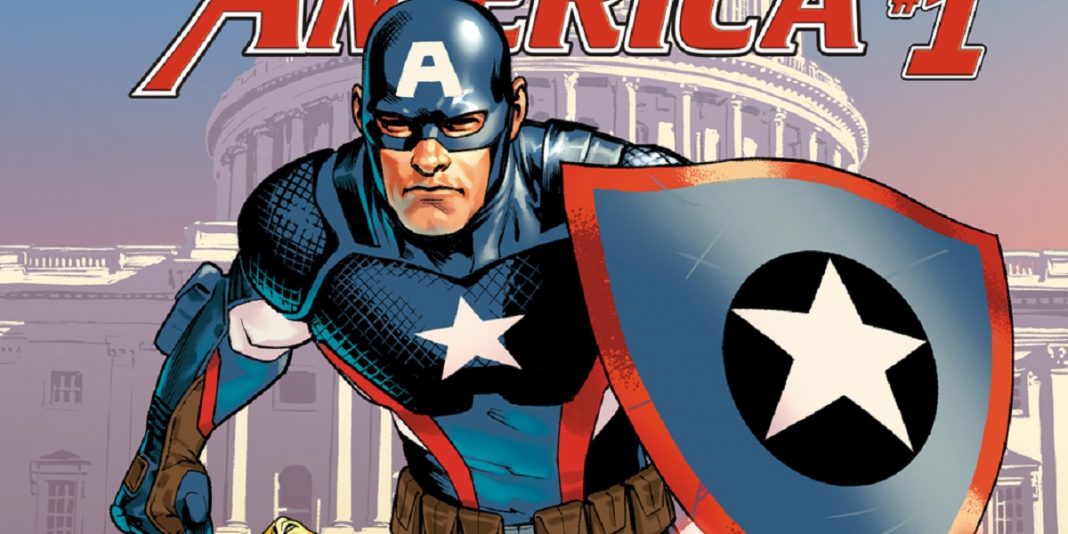 Check out Our Review [WITH SPOILERS] of Steve Rogers: Captain America #1

So, Marvel has published Steve Rogers: Captain America #1, and there’s a lot of hand-wringing going on out there. Supposedly, there were even a few death threats directed at the creative team. Wow. If you’re one of those people, please stop reading this; I have no words or patience for that kind of reactionary crap.

It seems that most people really complaining about this first issue haven’t actually read it, because this is a damn good comic. Let’s recap it before we get to the shocking ending. The book picks up with Steve Rogers growing accustomed to his newly created youthful body. He hunts down an offshoot of the Red Skull’s new ISIS-like HYDRA as the book explores Rogers’ continued relationship with Sharon Carter. I really dig how Jesus Saiz draws Carter as an athletic, mature woman. We just don’t get enough meaty action roles for people of a certain age in comics and I’m really digging it; despite the fact that Carter is very young in the films, Marvel is not afraid to have an older woman enter into a physical relationship with a Cap.

The second act of the book sees Cap go after Baron Zemo as the villain is trying to recruit for a new Masters of Evil. Zemo joins with some real loser villains when Rogers springs into action to take Zemo down. Along with Cap are nearly forgotten heroes Jack Flag and Free Spirit, two obscure characters from the 90s. Spencer does a really good job of making the reader care about these oddball heroes in a short time, inserting little facts about the characters’ histories in some masterfully rhythmic dialogue.

The issue is interspersed with a beautifully drawn flashback of a young Steve and his mother meeting a mysterious woman. The woman saves the Rogers from Steve’s drunk dad, takes them out to eat, and fills their heads with hope and love. She then gives them a flyer and asks the Rogers to join her newly created community action group. The name of that group is HYDRA.

Now, this is where things get intense. Cap confronts Zemo and takes him down. Jack Flag flies to assist Cap and shockingly Cap tosses Flag out of a moving plane. The first issue of this new series closes with Rogers saying “Hail HYDRA,” implying that the Steve Rogers fans have known, loved and trusted for years has secretly been a HYDRA Agent.

Well, some of fandom is reacting badly (NOOOO, not fandom), but it is clear that this story is an iceberg and the “Hail HYDRA” is the only part visible at the moment. The issue mentions the reality altering Cosmic Cube again and again, plus, if I’m not mistaken, the Red Skull still possesses the brain of Charles Xavier, so there are tons of ways Rogers could have been manipulated into believing he had past ties to HYDRA. And there’s that mysterious woman from the past. Couldn’t she have planted a sleeper agent-like suggestion into Rogers?

Whatever the case, if you’re not a reactionary man (or woman)-child, you will realize that this is just the first chapter of a masterly told and emotional story. Soon, it will be revealed how and why Cap is a HYDRA agent and the story as a whole can be fully judged. One thing that has to be said about Spencer and Saiz is, man, they found a way to make fans care, huh? Maybe a bit too much. I really can’t believe that fandom would react so poorly to the first chapter of a comic instead of waiting until the conclusion.

Guys, Captain America is not a sleeper Nazi agent, trust me on this; there’s a story here, and I for one can’t wait to see how it unfolds, because this is on hell of a comic.