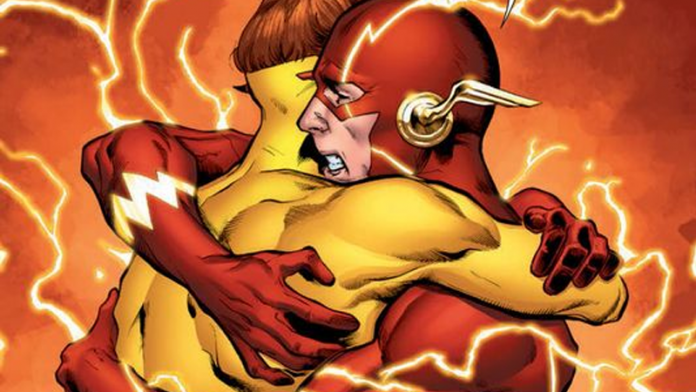 Before we start, one warning… there is NO WAY to present our DC REBIRTH #1 review without revealing spoilers. So, proceed with caution.

DC brings back a host of characters, kills one off and makes an unprecedented addition to its main continuity in the one-shot launching its new REBIRTH initiative. That’s a lot of content to pack in, even for an 80-page issue. Does it live up to the hype?

This issue is a rebirth, in more ways than one. One key character who was killed off during the “New 52” era returns, albeit as an infant. Several other characters return, all of whom were omitted or exiled when the “New 52” reboot took place. One of those omissions, Wally West, is the central figure of this story. His rather painful travels through the Speed Force allow us to check in on a cast of dozens across the DC Universe, as Wally tries to find an “anchor” to bring him back to the land of the living before the Speed Force rips him asunder. Wally ends up succeeding – at the end of a reunion with the original Flash, Barry Allen – and that is the dramatic and emotional high point of the book.

Wally West isn’t the only returning member of the larger DC cast. We also get a look at Ted Kord, the original Blue Beetle working with his “New 52” successor; Ryan Choi, one of the men to don the mantle of the Atom in the prior continuity who’s now a graduate assistant to Ray Palmer; Aqualad, who has yet to come to terms with either his powers or his sexual preference, and even an unseen member of the Legion of Super Heroes.

And that doesn’t even include the revelation about the Joker.

We even see the “pre-New 52” Superman enter the mix, right as the “New 52” Kal-El is currently missing in action.

New and returning faces is only one way that we experience a rebirth. The issue also teases, or outright revives, a couple of important romantic relationships in the DC continuity. It hints at the return of certain team-ups.

I won’t even go into the revelations at the very end of the issue, which announce the addition of some very important characters under the DC umbrella (here’s a hint: Doomsday Clock). Up until now, they’ve been absent from the major continuity of the DC Universe but appear poised to announce their presence in a resounding manner. The conclusion, which made me yell out loud in an empty room, is intriguing… but also very, very puzzling because I’m not sure how it’s going to be executed in a way that makes sense.

Like I said, a massive story is told in these 80 pages, but with Johns wielding the writer’s pen and an all-star team of artists combining to do the heavy lifting, they accomplish the task well.

Whereas the “New 52” was spun as a way to attract new readers to the DC brand, REBIRTH definitely is an appeal to veteran comic fans and lapsed readers. If you’re unfamiliar with the DC mythos, a lot of what happens in this 80-page special is going to be confusing.

DC head honcho Geoff Johns was so confident in the quality of REBIRTH #1 that he promised to refund dissatisfied readers’ money. My $2.99 is safe.