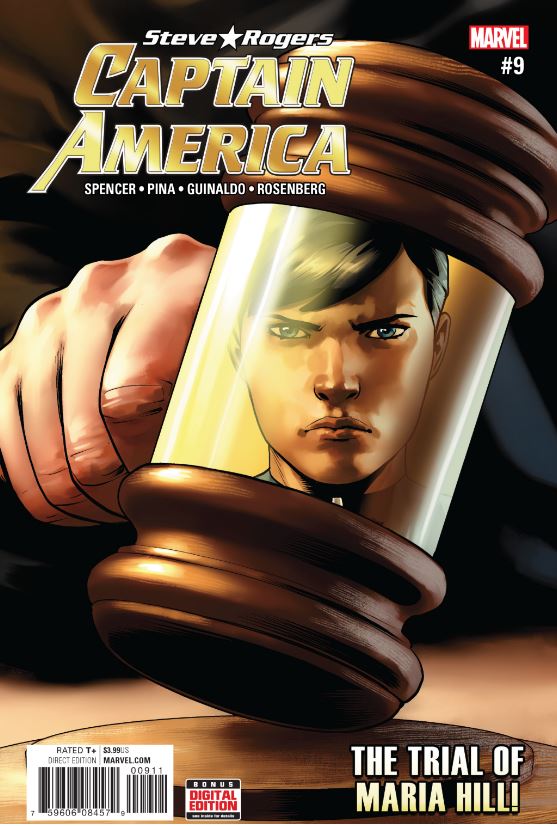 Gang, our Steve Rogers Captain America #9 review is a little SPOILER-Y, so…check back with us after you’ve read the issue. Oh? Still here? Thank you!

It’s time to check in on the “Hail Hydra!” era of Captain America as writer Nick Spencer tries to keep many intriguing balls in the air as he juggles a number of plot lines that seem to be leading to huge things for Marvel.

In Steve Rogers: Captain America #9, Spencer presents the trial of Maria Hill. One of Marvel’s best crossovers of the past few years (and there has been a ton of ‘em) was Avengers Standoff: Pleasant Hill, the tale of brainwashed villains caged in a suburban prison. Maria Hill built Pleasant Hill with a sentient Cosmic Cube, and long story short, this storyline laid the foundation for Spencer’s run on Steve Rogers.

Now, in Steve Rogers: Captain America #9, Maria Hill goes on trial for her actions and what follows is a gripping courtroom drama that is as well-paced and gripping as this sort of thing can be in a comic book. I mean, it’s a court case. With lesser creators, this whole thing could just be a bunch of warbling heads spitting accusations at each other. But with Spencer overseeing the case, readers are treated to a fast moving, snarky, socially aware trial that is a joy to read. It also ends with a reveal from Hill that will mean huge things for the Marvel Universe.

Now, lest you think this is Maria Hill’s book, Spencer presents plenty of Steve Rogers as the not-so-good Captain goes on a mission to retrieve the book of the Darkhold. Of course, this mission is anything but typical because these days, Steve Rogers is as corrupt as the vile book! And believe me, Spencer plays with these twists to great effect. Spencer also tosses in some ominous flashbacks to Rogers’ suddenly altered youth and even treats readers to a Union Jack guest spot.

Artist Javier Pena creates a clean and bombastic tapestry for all of Spencer’s plots as the court scenes are as fun to look at as the Captain America action bits.

Steve Rogers: Captain America #9 is daring and complex storytelling with a number of plots ebbing and flowing all at one, and it’s a blast. Spencer continues to have balls of vibranium with this title and it’s fun to experience.