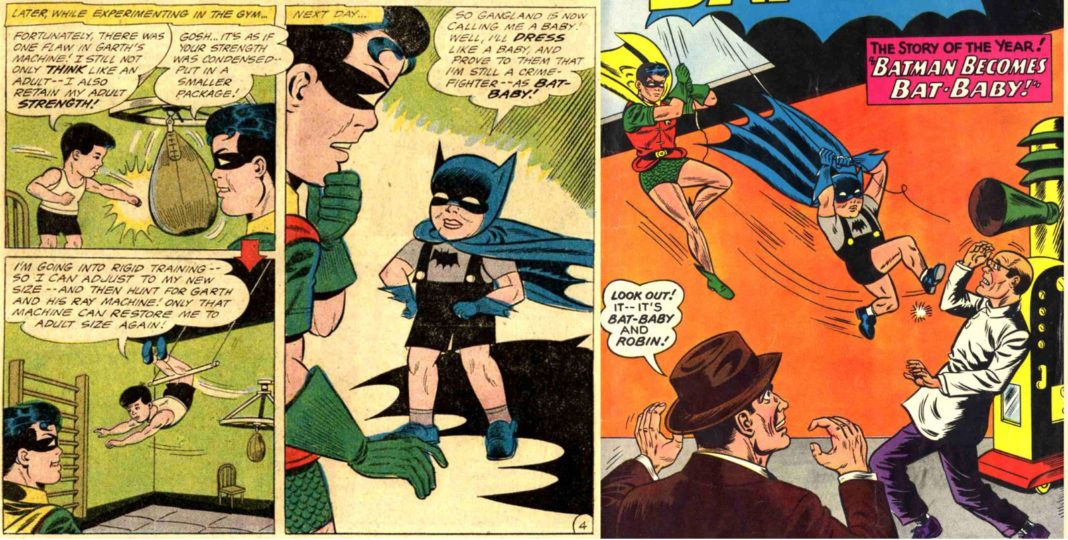 Sometimes, when a character’s story becomes too predictable, writers will try to shake up the status quo. Within an instant, a character — and their world — is changed in ways the reader never thought of before. Some changes can become essential to the character, while others are hated or ignored until they fade into obscurity. Some of our favorite superheroes have gone through these dramatic changes, and while they’ve endured, it’s hard to believe they actually happened. So, here are the strangest transformations that befell ten of your favorite superheroes!

So, this one might still be fresh in your memory, but the concept alone is seriously questionable.

Following Damian Wayne’s return from the dead, the young Robin found out he gained superpowers! Which would’ve made sense if this happened to Jimmy Olsen or Lois Lane, except this is Robin. You know, Batman’s sidekick?! Not that the idea isn’t interesting, but it does feel a bit out of place for a Batman story. Although it didn’t last for very long, it certainly got its fair share of media attention.

Eventually, Hal was revived, became Green Lantern again, and the Spectre moved on to find his next host. Many superheroes have passed on and returned to life, but Hal definitely had one ghostly road trip before that happened.

So, this one’s kind of hard to follow, but I’m going to try my best to explain it. Years ago, Magneto removed the adamantium from Wolverine’s skeleton, and this (for some reason) caused him to start devolving. Things got worse when he was kidnapped by the villain Genesis, who tried to re-bond the adamantium to make Wolverine a minion of Apocalypse! This backfired and Wolvie’s devolution intensified as he became a feral caveman (because of course?)! Eventually, Wolverine got his metal claws back and then, out of nowhere, re-evolved to a state of normalcy. Yeah, now you know why this was confusing.

Wolverine was basically put through the wringer, and things got weirder and more convoluted as it went on. This moment in Wolverine’s history is largely forgotten and you can see why.

Ever wonder what it’d be like to be in two places at once? Well, Superman sure knows what that’s like. After developing energy-based abilities, Superman changed his costume to a blue and white one. Things got weirder when Cyborg Superman split him into two beings, one red and one blue. The idea sounded nice at first, but things took yet another turn for the bizarre.

The two Supermen had very different personalities which caused the two to disagree quite often. They also fought over Lois Lane, to the point where she kicked them out until they could sort it out! The tow eventually came back together (after more fighting), and Superman’s normal abilities were restored.

“Electric Superman” was one of those moments where they tried to reinvent a popular character and it didn’t really stick. Sometimes if it ain’t broke, don’t fix it!

In the controversial storyline, The Other, Peter Parker died and was reborn with some new abilities. This included an enhanced healing factor and “spider stingers” that would protrude from his wrists. And yes, this does sound exactly like they gave Spider-Man Wolverine’s powers! But, as you probably guessed, these new powers were never mentioned again. Actually, they were used a lot more by the Scarlet Spider, Kane!

Yep, America’s super-soldier turned into a werewolf. And no, I’m not joking — not even a little bit. Capwolf was only semi-sentient, and acted on his overpowering animal instincts. And, he just looked silly as a werewolf. Despite that, Capwolf was able to defeat the villain responsible for his transformation and return to normal.

To give credit where credit’s due, Capwolf is a beloved occurrence in Captain America’s colorful history. Heck, even Sam Wilson (the new Captain America) became Capwolf once; I’m sensing a new tradition!

Continuing the theme of “superhero monsters”, we have the Punisher as Frankenstein’s Monster! When the Punisher was killed by Daken (the Dark Wolverine), Mobius the living vampire tried to reconstruct him. The villain succeeded, but Franken-Castle became consumed by his need to kill Daken for what he did.

To see someone like the Punisher so radically altered was pretty crazy. I mean, would you have expected this from a Punisher comic? Probably not — it came out of nowhere! What’s even weirder is that this lasted for eleven issues. That’s more than any of the other entries on this list! If it went longer, do you think there would’ve been a “Bride of Franken-Castle”?

This Silver Age was a weird time for Batman, but this one really takes the cake. Batman was hit by a mad scientist’s device, and as a result, he became a toddler! Now, you’d think this would stop Batman from risking his more vulnerable body, but nope! In fact, he continued his fight against crime, calling himself “Bat-Baby”! Even more bizarrely, this actually worked and the villains seemed to have a tougher time fighting a tinier Dark Knight. Honestly, it’s the amount of silly one might expect from the Silver Age of comics.

So, if someone you knew suddenly turned evil, what would be the best solution? How about procuring a younger version of that person! Tony Stark was brainwashed by Immortus, so the Avengers grabbed a teenage Tony to fight the present, less agreeable Tony. They did this because….uh…..reasons! This resulted in the adult Tony dying while teen Tony took his place.

In typical comic book fashion, adult Tony would come back after a year and teen Tony would just fade away into obscurity. Much like “Caveman Wolverine”, this was extremely confusing and was not fondly remembered. What’s funny is that history again repeated itself when the X-Men did the exact same thing in All-New X-Men. Well, if at first you don’t succeed, wreck the timeline worse than Barry Allen!!

No, you didn’t misread that! For a short time, Wonder Woman worked at a fast food Taco place. And yes, I know everything about that sentence sounds insane. I mean, sure, it’s a living, but you’d think Diana would have better ways to make money with all her monster-slaying and god-battling. Give her credit though; she was a great sport about it and that’s better than most can say about a job like that!

Did I miss one? Any superhero transformations that drove you crazy? Let me know in the comments below!