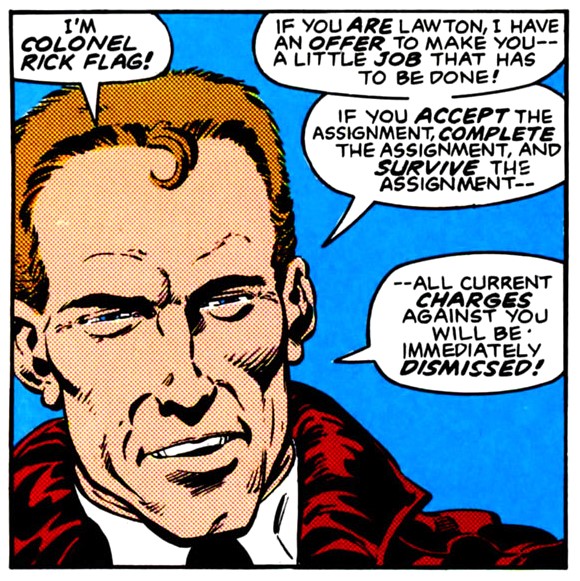 There may be many heroes and villains that are more colorful than our next spotlighted Suicide Squad member, but there is not a member of Task Force X that is more true and constant to the mission. We are here today to talk about the tether that holds the history of the Suicide Squad together; we are here to honor the history of Rick Flag- a man not afraid to go into battle wearing a lemon-yellow shirt! Rick Flag may not be as popular as Harley Quinn, as swarthy as Captain Boomerang, or as badass as Deadshot, but without Rick Flag, there may not have ever been a Suicide Squad. So before Flag steps onto the big screen for the first time (played by The Killing’s Joel Kinnaman), let us look back at the history of the multiple men named Rick Flag that have led the Suicide Squad.

With everyone talking about Suicide Squad these days, one major part of the team’s history is being overlooked – the fact that the Suicide Squad existed long before Amanda Waller put together her first team of super-villains. The original Suicide Squad, also known as Task Force X, first appeared in The Brave and the Bold #25 (September 1959) and was created by Robert Kanigher and Ross Andru. DC was publishing many war comics in the very early Silver Age, and the Suicide Squad had a rather brief run at stardom. The original Squad consisted of Col. Rick Flag, Jr., Jess Bright, Dr. Hugh Evan, and Karin Grace.

In truth, the Suicide Squad had more in common with the Challengers of the Unknown than it did Sergeant Rock and Easy Company as the Squad fought giants, dinosaurs, and other weird menaces instead of Nazis and commies. Flag was front and center leading his crew of brave adventurers in a hand full of adventures, and then for decades, nothing. Rick Flag would later appear as a member of the Forgotten Heroes in Action Comics #545, and together with his esoteric teammates, Flag took on the Forgotten Villains, a team in which future Suicider Enchantress was a member in bad standing. Funny how things work out, huh?

Anyway, when John Ostrander introduced his Suicide Squad in the late 80s, the legendary writer revealed that Flag’s father, Richard Montgomery Flag, once led an elite unit that was supposed to replace the Justice Society of America towards the end of the 1940s. Flag gave his life fighting the War Wheel (which was a giant Nazi buzzsaw – because, comics). Flag Jr. replaced his father in a new team that consisted of Flag, Bright, Evan, and Grace, and thus, the Suicide Squad was born. And they fought dinosaurs. Because, comics.

On their final mission, Evans and Bright were killed.  Fighting a Yeti.  Comics.

So let us fast forward to the late 80s and Ostrander. When DC launched Suicide Squad in 1987, Rick Flag Jr. was front and center. Handpicked by Amanda Waller, Flag was to lead a new incarnation of the Suicide Squad, one made up of the world’s most dangerous super-villains. And one that hopefully would not be killed by a yeti.

At first, Flag did not hide his hatred for the villains he led, but soon, Flag would grow to appreciate his team. He even befriended some of the more altruistic members of the Squad – non-villains like Nightshade, Nemesis, and Bronze Tiger. Even though he had no love for the villains on his team, Flag never led from the rear and was usually the first into battle. Karin Grace, the only surviving member of the original Squad other than Flag and Flag’s lover, served the team as its medic, something that also didn’t thrill Flag.

Sadly, even though Flag was a successful field commander for the Squad, as missions grew more deadly, Flag grew more mentally unstable. When Grace was killed in action, Flag completely lost it and attempted to murder a US senator after the politician threatened to reveal the Squad’s existence to the public. He would have done it too if Deadshot didn’t beat Flag to it.

After this mission, Flag learned that a forgotten Nazi nuclear weapon was about to be procured by the clandestine group of Middle Eastern super-soldiers known as Jihad (holy poopie, that’s just an uncomfortable name in 2016). While trying to retrieve the bomb, Flag was killed after the Nazi weapon detonated and now, the soldier that was a tether to the modern Suicide Squad and the original Task Force X was gone.

A Resurrection and an Identity Crisis

Not so fast. It seems you just can’t keep a good soldier down because in the 1999 Day of Judgment miniseries, Flag was allowed to return to life because of the selflessness of his actions. Now, this is where things get confusing. In the 2007 Suicide Squad: Raise the Flag miniseries, Suicide Squad grand master John Ostrander ignores the Day of Judgment business, and reveals that Flag never died in the first place. Instead, Flag was teleported to the hidden land of Skartaris (you know, home to DC’s Warlord – why aren’t they making a Warlord film by the way?).

In this same series, it was revealed that Rick Flag wasn’t even Rick Flag. Instead, the Flag fans knew from his time living and dying with the Squad was actually a soldier named Anthony Miller. It seems that Miller was Winter Soldiered into believing he was actually the son of the original Richard Flag by the always nefarious Wade Eiling. Eiling hoped to wrest control of the Squad from Waller using the mentally compromised Miller, but the brainwashed soldier was all screw this noise and embraced the Flag identity. Miller or Flag or GAHHH proclaimed that the Suicide Squad would always need a Rick Flag and proudly kept the name and identity.

So there you go – the origin of Rick Flag, a tale that connects generations of blazing battle action. One wonders if the film version of Rick Flag will have a lineage that can compare to the multi-generational fighting spirit of the Flag family.