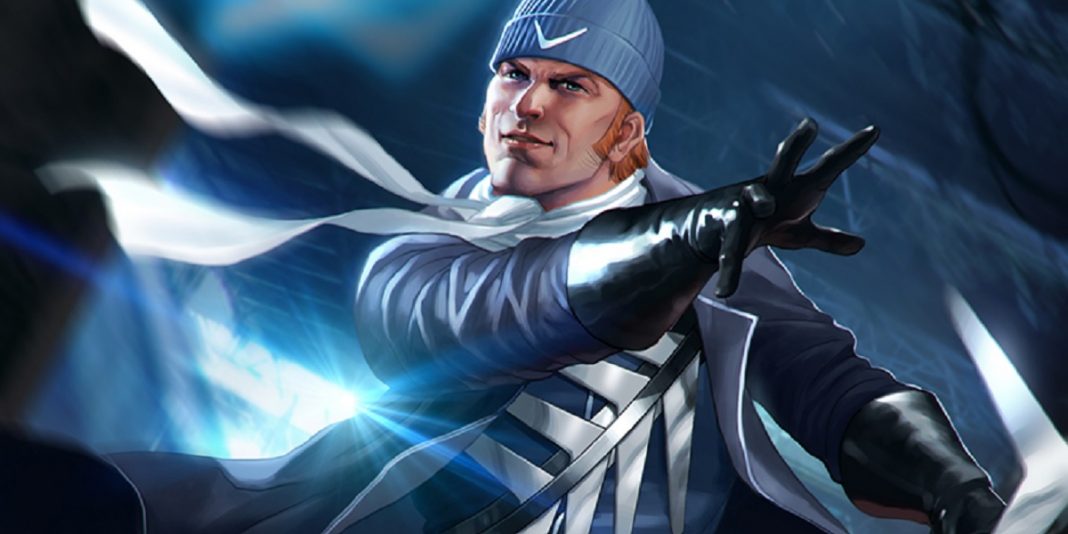 DC knows it, fans know it, and the talent that will be bringing us Suicide Squad in August knows it – you just can’t have the Suicide Squad without its resident Aussie scumbag, Captain Boomerang. For decades, Boomer Butt, as Amanda Waller not so affectionately calls him, has been front and center on the vast majority of Squaddie adventures. So before this boomerang-wielding perp makes his film debut (played by Jai Courtney), let’s recap the history of Captain Boomerang, the always opportunistic rogue from down under.

George “Digger” Harkness, AKA Captain Boomerang made his comic book debut in Flash #117 (December 1960) and was created by John Broome and Carmine Infantino. After DC introduced the Barry Allen version of the Flash to kick off the Silver Age, DC creators such as Broome and Infantino began building the new hero’s rogues gallery.

Captain Boomerang began his criminal career in a rather strange and inauspicious way. “Digger” was very skilled in the ancient Aboriginal boomerang. He was passionate about the ranged weapon and became one of the foremast boomerang throwers in the world. A toy company hired him to wear a kid friendly costume and shill boomerangs, and for a time, Harkness was happy, but soon, the troubled man began using his skills to commit crimes.

It was later revealed that the owner of the toy company was actually Boomerang’s biological father. Harkness’ early life was filled with family issues as his stepdad despised the lad. Young Harkness used his boomerang skills to lash out at the world and commit petty crimes. When his stepdad found out, he gave “Digger” the boot. Unlike a Boomerang, Harkness didn’t come back and ended up a criminal spokesman for a line of toys.

Most of the family stuff I just blathered about was revealed decades after Boomerang’s Silver Age appearances in the pages of Suicide Squad, but for now, let’s focus on the heady days of the early Silver Age, shall we?

From his first appearance, Harkness was a conniving, conning scum bucket. After Flash caught “Digger” for the first time, the neophyte Captain Boomerang claimed that he was framed.  He told Flash that someone was impersonating him as the immoral Captain Boomerang, and he even introduced the speedster to a couple of actors who were pretending to be Harkness’ elderly parents. Flash bought into it (sap) and let “Digger” go. But, as he always would, Captain Boomerang kept committing boomerang-themed crimes until Flash rounded him up.

In their second battle, Captain Boomerang (get this now), tied Flash to a giant boomerang and tried to shoot the Scarlet Speedster into space. Now, if you have the technical and engineering know-how to build a giant boomerang, why aren’t you the world’s leading aviation specialist? I mean, the giant space ‘rang had to cost billions- where the heck did “Digger” get that kind of cash? He must have knocked off all the jewelry stores in the world. Anyway, Flash escaped the space boomerang and rounded Harkness up again. Now that Boomerang has appeared on TV and will appear in the DC Cinematic Universe, somehow, somewhere, I need to see a live-action Captain Boomerang try to toss the Flash into space. Just saying.

In addition to being a solo threat, Captain Boomerang also joined the Flash’s famed Rogues Gallery and began making frequent appearances alongside Captain Cold, Mirror Master, and the rest of the Rogues. Captain Boomerang stood out in his very jaunty and colorful uniform and became a constant part of the Flash’s first decades of adventures.

After years as a constant pain in the Flash’s red ass, Captain Boomerang took his next step into DC lore. When Amanda Waller formed her first team of super-villains that would become the Suicide Squad, Captain Boomerang seemed like an odd choice. He had always been portrayed as a capable villain, but the Squad was formed to face – well, high risk, black op, wetworks suicide missions against some of the most dangerous and monstrous threats in the DC Universe. A dude that once shilled children’s toys didn’t seem to be made up of the same piss and vinegar as the likes of Rick Flag, Deadshot, Nightshade, Bronze Tiger, and the rest. And you know what, he wasn’t.

From his earliest missions on the Squad, Boomerang was exposed as a sniveling coward. Let me tell you, during the late 80s run of the Suicide Squad, legendary writer John Ostrander had a blast with Harkness. During the Squad’s first outing, Harkness had a run in with a fellow Squad member, the mental manipulator known as Mindboggler. Mindboggler used her mind powers to basically figuratively make Boomerang poop his pants. Humiliated, Boomerang vowed revenge. During a mission, Boomer could have easily saved Mindboggler but stood back, causing his teammate to get killed. This exposed Harkness as the dishonorable shmuck he would remain for Ostrander’s entire run. It should be noted that during the Suicide Squad, Ostrander began having Boomerang talk with an Australian accent, and soon, the writer would reveal Boomerang’s past in the Outback and expand upon the villain’s origins.

Another memorable Squad moment took place when Boomerang fooled his fellow Squaddie Slipknot into testing the bomb bracelets the Squad members were forced to wear. “Digger” didn’t fully believe that the bracelets would explode if one of the Squad tried to escape so he conned Slipknot into trying it out. The bracelets were legit and Slipknot found himself one arm short. Hmm, Slipknot is sure going to be in the Suicide Squad film. Could this bit of Squad lore play out on the big screen? We’ll find out in a few weeks.

Another memorable Squad moments involving Harkness saw Boomerang adopt a second villainous identity when he stole the gear of the dead Mirror Master. Around the same time, Boomerang began stealthily throwing pies at his fellow Squad members. He even used his abilities to toss one at himself to allay suspicion. Eventually, Waller busted the pastry pelter and exiled him to a deserted island. Waller would later rescue Boomerang from the island and once again force the Rogue into the deadliest missions imaginable – and somehow the dirt bag Harkness survived. Captain Boomerang remained with the Suicide Squad until the team’s final mission and remains synonymous with the team to this day. So yeah, if there’s to be a Suicide Squad film, Captain Boomerang has to be there. Poor, poor Slipknot.

After the Suicide Squad disbanded (they’d be back), Boomerang grifted around the DC Universe. He rejoined the Flash Rogues and even took on Superboy, but when DC’s legendary Identity Crisis (2004) began, in this timeless tale written by Brad Meltzer and drawn by Rags Morales, Harkness found himself an anachronism. In the modern, high-tech world of super-villainy, a conman in a mascot costume wasn’t able to get much work. At this time, a depressed Boomerang decided to reunite with his estranged son – Owen Mercer. Mercer and Harkness bonded as Boomerang begged his old pal the Calculator for a meaningful job. Meanwhile, Sue Dibny, the wife of the Elongated Man, was tragically killed. The same killer that robbed the world of Sue’s brilliance hired Boomerang to take out the father of Tim Drake.

Boomerang took the gig, but unbeknownst to the now portly Harkness, the only reason he was hired was because the killer thought that the incompetent Boomerang would botch the murder. The real killer sent Drake a gun to defend himself, but Boomer had one surprise left – this time, after so many years, his boomerang struck home, killing the father of the third Robin…but not before Jack was able to shoot Harkness. Both Owen Mercer and Tim Drake were orphans and the villain that once tried to toss Flash into space was gone. Well, at least for a little while. This is comics,  after all.

Bu the legacy of Captain Boomerang wasn’t dead as Mercer took up his father’s identity and joined the Flash Rogues. At first, the new Boomerang was a bit critical of his new partners, but soon, the young villain who just lost his father saw the Rogues as a brotherhood and a chance for something of a family. The villainous life wasn’t really for the altruistic Mercer though, and he soon joined the superhero team known as the Outsiders. Ironically, in this new generation, the gaudy costume of Captain Boomerang was running into danger to help people instead of slinking away from danger to save his own skin.

But the legacy of “Digger” Harkness wasn’t gone for good, and like a boomerang, this Rogue was soon to return. During the “Blackest Night” event, Black Lantern zombie versions of DC’s heroes and villains rose from the grave. This included a Black Lantern “Digger.” When Harkness found his son, he convinced the inexperienced hero/villain that if he was fed the blood of the living, he would return to life. Ah, Boomer Butt, you’re dead and still running a long con.

Mercer believed dear old dad and fed him the blood of recently murdered innocents until Mercer was confronted by Captain Cold at the elder Boomerang’s grave. Cold reminded Mercer that Rogues didn’t kill and pushed the younger Boomerang into his father’s grave. There, the undead Harkness ate his son’s heart and tried to escape. Cold froze both killers but like the slippery eel he is, Harkness escaped and joined the other Black Lanterns in battle against Earth’s heroes. When the heroes defeated the Black Lanterns, “Digger” Harkness returned to life. The first, original, slipperiest Captain Boomerang was back! Soon, Harkness would take part in the “Brightest Day” event where he found somewhat of a semblance of redemption and became a White Lantern for a time.

Would the original Captain Boomerang finally have sided with the angels? We’ll never know because the New 52 swept away all the old DC heroes and villains. In this universe, Captain Boomerang first appeared as a member of the Suicide Squad. This Boomerang was still a bit of a salty old crank and con man, but he was way more competent and confidant. The New 52 Captain Boomerang was reflected in the Harkness that made his debut on the CW. Harkness, played by Nick Tarabay, debuted on an episode of Arrow and fought both the Flash and Oliver Queen. Boomerang took both heroes to the limit and was revealed to have been a former member of the Suicide Squad. Most Squaddies like Boomerang, Deadshot, and Waller have been removed from TV by DC for some silly reason (something about not overexposing characters that will appear in film or some nonsense), but hopefully one day, Tarabay’s Boomerang will return. But for now, let us get ready for “Digger” Harkness on the big screen, as he will soon be drinking, cussing, and tossing his signature ‘rangs when Suicide Squad hits theaters. Who knows, maybe Captain Boomerang will also appear in the upcoming Flash film film to brings things full circle.