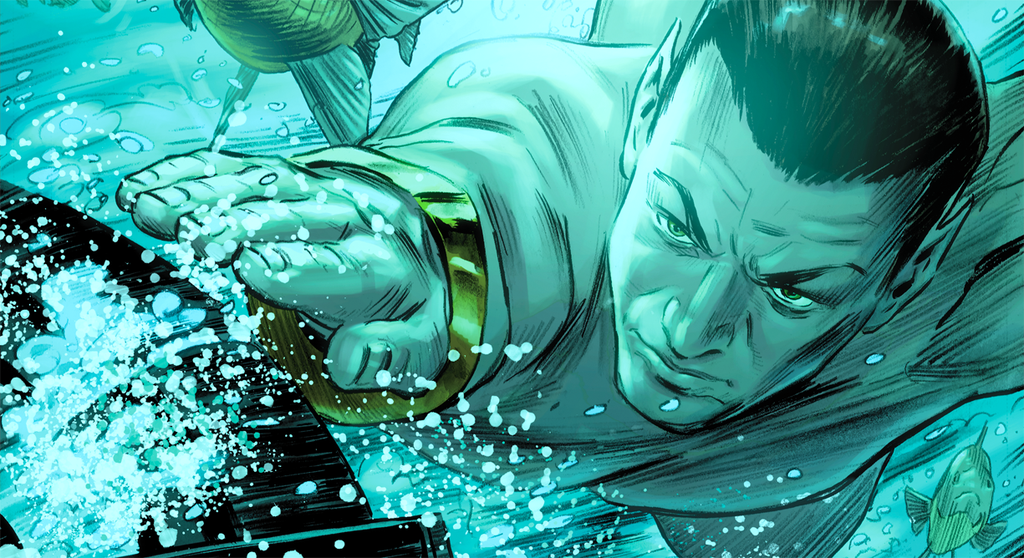 If you’ve seen the underground hit that was Dr. Horrible’s Sing-Along Blog starring Neil Patrick Harris and Nathan Fillion (and if you haven’t, you really should), then you’d know all about superheroes who are complete and total a-holes. Nathan Fillion’s Captain Hammer may be the “hero” in the short film, but he’s a self-centered and egotistical jerk who cares for nobody but himself. He just loves the limelight and adores taking credit for all his supposedly heroic deeds (not unlike DC’s Booster Gold, who, deep down, is actually a sweetheart and a character I like very much).

It just goes to show you that some heroes have bad attitudes, especially when it comes to Iron Man’s alcoholism and Batman’s grumpiness. Here’s a list of completely unapproachable superheroes who will certainly be Grinches during the holiday season.

Aside from the fact that the mentally unstable Namor loves to invade the surface world just because he feels like it, he’s also constantly trying to steal Sue Storm from his husband Reed Richards because he’s, well, a jerk. He also loves to leave his superhero teams constantly because he feels he’s just too good for them. He probably believes in the power of his abs that just won’t quit, thinking that perhaps one day, he’ll finally be able to woo Sue and make her leave her Speedo-less husband behind.

How Guy Gardner ever got accepted into the Green Lantern Corps still remains a mystery, but perhaps it’s the abrasive hothead’s aggressive bravado that makes him likable as a space cop. He’s usually bombarding other teammates with insults and is always full of himself, but GL Stewart did say that what makes Guy valuable is his stubbornness and intense loyalty to the Corps and to his friends. And if that means he can be an insufferable jerk sometimes, we’ll probably let it slide.

Sure, the CW’s Arrow has certainly remade Ollie and differentiated him from his character in the comics, but no amount of parading Stephen Amell’s muscles around will distract us from the fact that Green Arrow is definitely one of the biggest superhero jerks in comics. Green Arrow is a great hero, yes, but let’s not forget that he disowned his drug-addicted ward Speedy. He’s also known for squabbling with the Black Canary, even cheating on her multiple times. Perhaps you, too, have failed his city, Oliver.

Forget the fact that fans already hated Jason Todd enough to officially vote for his death at the hands of the Joker. He used to be a pompous brat, and when he came back to life, he became an even bigger ass-hat. He treated everyone like crap, making you second-guess his actions all the time because trusting him just might mean your death. Then again, Jason Todd’s actually turning out to be kinda cool during his current, ongoing Rebirth series, so he just might fall off this ‘superhero jerks’ list soon.

Some people might think that Cyclops is all noble and leader-y, but the truth is that Scott Summers is a terrible husband. He left his first wife, Madelyne Pryor, for Jean Grey, and years later, he eventually cheated on Jean with Emma Frost. If that doesn’t count him in the list of Grade-A superhero jerks, I don’t know what will.

Okay, so Larfleeze isn’t really a superhero, but he isn’t technically a super-villain, either. Plagued by the oversimplification of greed, Larfleeze just wants everything to himself—and that’s a horrible attitude, especially at Christmas. In fact, in 2011, Geoff Johns and Brett Booth teamed up to release Green Lantern: Larfleeze Christmas Special, a story in which Larfleeze decided to attack the North Pole in retaliation for Santa Claus not giving him everything on Christmas morning. Hal Jordan eventually taught him the true meaning of the season, and Larfleeze ended up realizing that what he truly wanted for Christmas was his family, which left him crying in front of the fireplace in the last panel. Okay. So maybe that last scene doesn’t make him a total jerk…

Who do YOU think are the biggest superhero jerks in comics? Sound off in the comments section below!