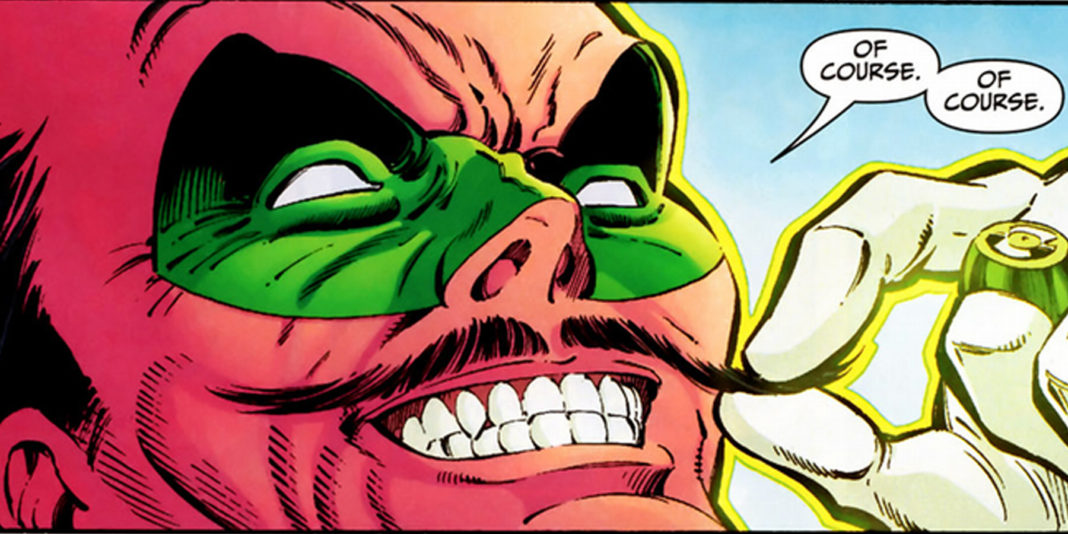 Superheroes have different powers, but none can compare to the level of badassery that the mighty mustache can bring—even Superman thinks so (follow that link to Henry Cavill’s mustache debacle and all will be revealed). So, to pay homage to the greatest and most majestic superhero mustaches ever, here are ten mustachioed masterpieces who sport the best beards-bits in comics.

DC’s New 52 redid a lot of things—things that made fans raise their pitchforks and hold protests in angry mob fashion—but nothing is more tragic than the loss of Oliver Queen’s magnificent goatee. Some might say that the goatee itself deserves a proper funeral, and that’s because Green Arrow’s goatee is one of the most epic superhero mustaches ever.

Sure, Arrow’s Stephen Amell is rocking his own version of the famed facial hair, but nothing beats the original, really.

The whisper-thin ‘stache screams diabolical evil mastermind, but that’s probably why Sinestro is the leader of a yellow-themed Corps that instills fear throughout the whole galaxy. He was, oddly enough, a former Green Lantern, but just by his moustache alone, the Guardians really should have predicted that he would turn into a fear-crazy supervillain and kill everybody someday.

No, we’re not talking about the clean-shaven Arthur Curry in the orange and green suit. We’re talking about JLU Aquaman with the gruffness and the harpoon hand, because just as he grew that facial hair and started rocking those curls, that was when he actually started growing in popularity.

He used to be the laughingstock of the League, really, but who would have thought that sporting a beard and looking like a hobo would make him rise to the ranks of coolness?

If anyone needs the grit that comes with a moustache, it’s Jim Gordon. The Commissioner not only has to deal with the often-incompetent-if-not-corrupt cops of Gotham’s Finest, but he also has to deal with a rich-boy psychopath who dresses up as a bat every single night, so yeah, who has time to shave with all that on his plate?

And speaking of putting up with superhero crap, J.J. has his fair share in the Daily Bugle. J. Jonah Jameson may not be an actual crime-fighter, but the Hitler-slash-Charlie-Chaplin look alone lands him a spot in the most memorable superhero mustaches ever. He even became the mayor of New York City that one time, so the sexy ‘stache must be working.

Who else can pull off those muttonchops? NO ONE. Not a single character can wear the style as well as Logan does, and he’s become quite known for it. in fact, Wolverine’s kept the retro look alive for decades and still makes it look cool up to now—it’s either that or nobody is just that brave or stupid enough to tell him otherwise.

(And yes, we know those mutant ‘burns aren’t actually mustaches, but they’re legendary enough to promote their own category: ‘side-staches’!

Tony Stark has a lot of things—buildings in his name, cars of all models, armored toys that keep him alive and make him a formidable member of the Avengers—but probably the thing that makes him most popular is the facial hair. That iconic goatee is the telltale sign of the self-centered billionaire douchebag in the comics, but the ‘stache is so stylish that it makes him one of the most memorable mustachioed men in Marvel.

Similarly, Doctor Stephen Strange sports a serious facial hair combo that makes it one of the most awesome superhero mustaches too, even when he’s in Astral form. It’s been said that Strange will soon be replacing Iron Man as the sorta-leader of The Avengers in the upcoming movies, so could it be that he’ll replace Tony’s epic ‘stache, too?

When it comes to hair, nobody does it better than Thor. Those long golden locks on his head go perfectly well with his mighty moustache, and if we can figure out his secret to not letting his hair go all frizzy amidst all that thunder, we’d be set for life.

Of course, none of the superhero moustaches can hold their own against Stan Lee himself. The mustachioed maestro’s lip warmer is a staple in any Marvel movie, and there’s not a face in the streets of geekdom that won’t recognize his look from a mile away. He’s Stan The Man, after all!