Home COMICS The Defenders Issues 1 and 2 Review: Takin’ It to the Streets

Fellow true believers, our review of The Defenders #1 and 2 is SPOILER-Y, so … check back with us after you’ve read the issues. Oh? Still here? Thank you!

I could count on one hand how many ongoing Marvel titles are good nowadays and two of those titles are Daredevil and Jessica Jones.

I got excited this past Free Comic Book Day when Marvel released a teaser prologue to its upcoming new title, The Defenders. Anyone who keeps up with the Marvel and Netflix series knows that Daredevil, Jessica Jones, Luke Cage, and Iron Fist were inevitably going to have a team-up series, and it’s even more inevitable that the marketing wizards at Marvel would relaunch a comic title.

If you didn’t read the Free Comic Book Day prologue, which was combined with a Guardians of the Galaxy story, that is OK as the story is merely a tease which is talked about in issue #1.

The first issue finds Luke Cage going about his day when he’s brutally attacked. It’s soon revealed that long-time Cage foe, Diamondback, has returned and the story picks up directly after the events of the Free Comic Book Day release – with Jessica recuperating from her encounter with Diamondback and the rest of the team coming together. The second half of the issue finds its focus on another character that Marvel is trying to bring to the big screen: Black Cat.

In issue #2, the story picks up where #1 left off, as Jessica Jones, Daredevil, and Iron Fist frantically search for Diamondback. There are some great special appearances by supporting heroes we haven’t seen in a while, but what’s really exciting is how this issue ends: with everyone’s favorite anti-hero vigilante.

What I like the most about this title are the characters which make up the team. They often deal with crime steeped in the real world, making them easier to relate to. As they say in issue #1, “… if the Avengers … are up there, the Defenders need to be down on the streets.”

My only complaint about issue #1 is that for an event that calls together these four heroes, the threat of Diamondback is pretty underwhelming. It’s never exactly described what he intends to do other than just be the next “Kingpin” – again, pretty underwhelming considering Daredevil has faced the actual Kingpin on his own.

Another issue that concerns me is that most story arcs last six issues, and they’re somewhat resolved by the end; however, at the pace this story is going, I’m not sure there will be such a resolution as the pacing is pretty slow. Not much happens in terms of story advancement but Brian Michael Bendis is writing this title so I’m hoping the story picks up.

Bendis is one of the few noticeable “big name” writers working for Marvel right now (he wrote one of my favorite runs on Daredevil — behind Frank Miller — and Jessica Jones since he created her in 2001), and he does well with the first two issues. The contributors who really knock it out of the park are artist David Marquez, matched with colorist Justin Ponsor.

Marquez’s artwork on each of the characters is beautifully detailed; my favorite is his rendition of Jessica Jones.

Ponsor’s masterful use of color helps put the reader into each scene, giving off more depth and realism. While it’s not as good as X-Men Gold, The Defenders is off to a fairly good start and is a great way to prepare for Netflix’s Defenders series when it debuts this August. 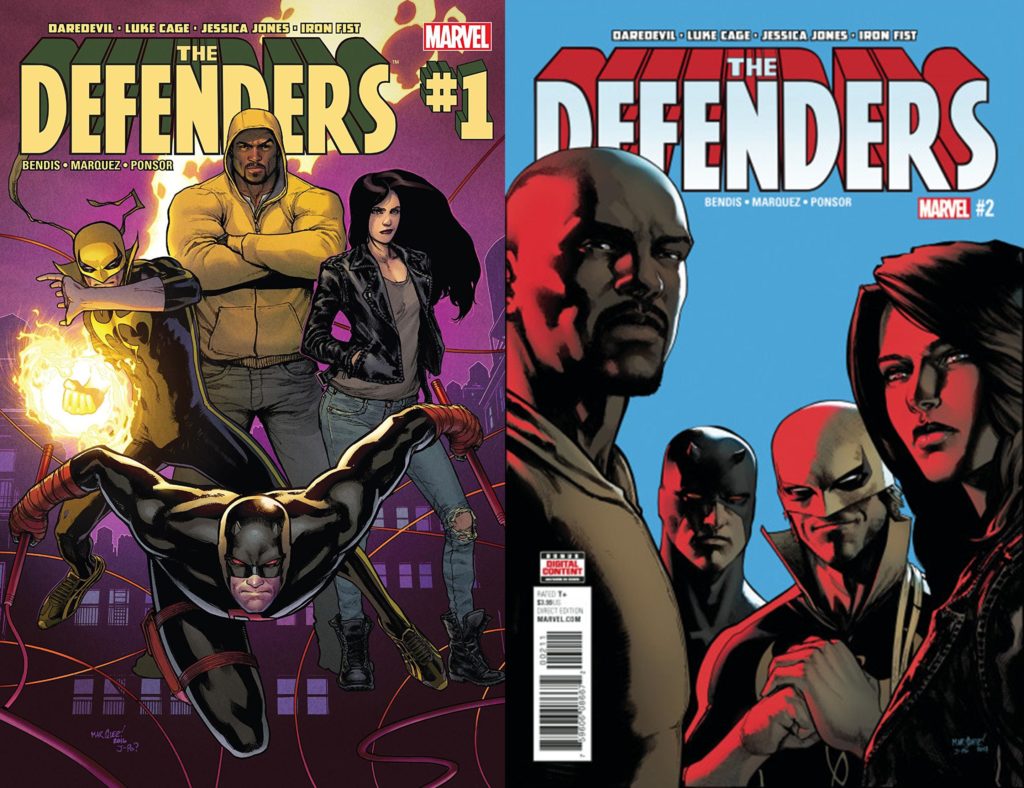 If there’s anything I missed or maybe something you’d like to add, be sure to comment below!