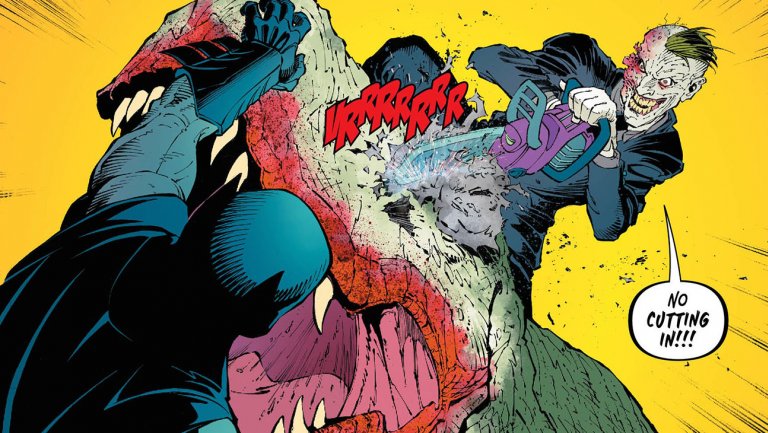 “I love this world… but there’s something missing…”

Echoing one of the less obscenity-laden thoughts of fans following the launch of the New 52, DC Entertainment seeks to satiate this unresolved feeling with the recent announcement of the line-wide relaunch, DC UNIVERSE: REBIRTH. The creative mission of this non-reboot is to return to the essence of each character and attempt to provide quality stories for readers. With the launch of the New 52, the entire DC Comics fan base cried foul when they discovered that in addition to frustrating timeline inconsistencies, the reboot was riddled with retconned character development as well as major departures from the traditional portrayals of certain characters. The original intent was to make characters more edgy, then perceived as more interesting, for the sake of increasing revenue.

This new creative mission of character backpedaling also comes at a price; each title is experiencing a shake-up with their creative teams. As a result, DC UNIVERSE: REBIRTH will precipitate the tragic death of Scott Snyder and Greg Capullo’s well-received tenure on Batman. In spite of a few issues, their run on the title has been a highlight of The New 52. The dismemberment of this creative team is like DC Comics driving a dagger into the heart of my best friend. Once Scott Snyder and Greg Capullo confirmed their exit from the title, I immediately began the process for mourning this tremendous loss. My hope is to walk you through the five stages of dealing with the loss of Scott Snyder’s Batman, and illustrate how I eventually managed to accept Snyder’s departure.

When whispers of a potential line-wide relaunch for DC Comics first began on news sites, I found myself summoning my inner Michael Scott as I dismissed the entire proposition. At the time, annual relaunches with radical changes to a franchise’s status quo had become more of a Marvel tradition. In some cases, these relaunches came with adjusted creative teams on their titles. The preposterous prospect that DC would relaunch their line of books with new directions and creative teams was unfathomable, especially after establishing some form of frustrating continuity within The New 52.

This is especially true when considering Scott Snyder and Greg Capullo’s run on Batman. Consistently a high point for much of The New 52, their tenure on Batman has brought about some of the best examples of comic book storytelling for this decade. The Court of Owls was an amazing addition to the Batman mythos, and I would be remiss not to mention one of my favorite issues of all time, Batman #5 –Face the Court Part II. Without spoiling too much of this issue, Snyder and Capullo allowed the audience to participate in Batman’s descent into madness in a way that only comics will allow. Although there are other shining examples of their run on the comic, this is the one that stands out in my mind above the rest. I eventually found myself thinking that with such an awesome track record, DC Comics would not be crazy enough to remove this team from this title.

Unfortunately, late last month, Newsarama and IGN confirmed that Scott Snyder and Greg Capullo would officially be off the title following DC UNIVERSE: REBIRTH. My heart sank deep into my stomach as I felt the pain from this loss. It was only after this that I began to feel the…

LET THE HATE FLOW THROUGH YOU!

Any time that either of the Big Two whisper a hint of reboots, relaunches, or retcons, the entirety of the internet flies off into rage-fits that rival the Hulk. I was no different. How dare DC remove the creative team of Scott Snyder and Greg Capullo from Batman?! After tearing through several pairs of pants and underwear, pulverizing my keyboard into atoms, punching out all of the windows in New York Skyscrapers, punting Tim Roth across the length of a football field, and leveling Wakanda with rage-flatulence, I finally developed my master plan.

So yeah… If you could leave Scott Snyder and Greg Capullo on Batman… That’d be great.

I would contact the editors at DC Comics! In my letters, I appeal to them through logic by explaining that it’s unnecessary to fix things that aren’t broken. After several correspondences, forum posts, impromptu protests, hastily written cease and desist orders, and tens of thousands of dollars of legal fees, my lawyers tell me that I’m no longer allowed on DC Entertainment property or in the state of California. On a positive note, at least I have Scott Snyder’s autograph!

I curled into the fetal position in defeat as I realized there were no other options available other than accepting this fate. Cocooning myself in several layers of blankets and pillows, I have spent the last month awaiting the last few issues of Scott Snyder and Greg Capullo’s run on Batman. I find myself counting down the days until the next comic, and the wait between each issue feels like a lifetime. However, each day that passes is another drop of sand in the hourglass counting down to the end of their run.

All will be well.

Five years of working on a title can be an eternity for any creative team. As we approach the fifty-second issue of the title, I can only imagine the intense amount of planning involved in orchestrating some of the major events that Scott Snyder and Greg Capullo had planned for Batman. The Court of Owls, Death of the Family, Zero Year, Endgame, and Superheavy have all been massive crossovers for the title character and his supporting cast; the amount of planning for these crossovers would probably drive any mere mortal to insanity. Moreover, fifty-two issues of unique content is an incredible feat. It would not be a surprise if either of these creators are experiencing some form of burnout in regards to The Caped Crusader. I think we were all beginning to see the burnout with their current arc, Superheavy. On paper, putting Jim Gordon in the robotic-bunny-batsuit seemed to be an instant flop, and it turns out I care less about Jim Gordon in the batsuit. Additionally, the plot point of Bruce Wayne dying and being resurrected via Dionesium has not been my cup of tea. Having other characters die only to be resurrected by various deus-ex-machina does not necessarily bother me; this has been a trope of the genre from many years. However, I have always thought of Batman as an expert escape artist that can break out of any death trap. Having Batman die only to be resurrected by this means feels somewhat cheap.

Although I am not a major fan of many plot points in Superheavy, it is hard to deny that Scott Snyder and Greg Capullo’s execution of these concepts is still a strength of the book. By placing Jim Gordon in the batsuit, Scott Synder has been able to fully illustrate that there is only one Batman: Bruce Wayne. All of the others who have worn the suit have served the name well, but these characters are truly incapable of replacing Bruce. I think this is because Batman is not a mantle to be passed down. Additionally, this run gave the audience an amazingly over-the-top scene where Bruce rendered his body brain-dead so that he could restore the traumatic memories of his previous life. The mental trauma of becoming Batman is something that only Bruce Wayne could endure, which firmly cements Bruce Wayne as the one, true bad ass that we know he has always been.

With their final arc on Batman, Scott Snyder and Greg Capullo have seemingly said nearly everything that they set out to say in regards to the character. Although I am not a huge fan of many of the plot points from their current arc, I cannot deny that their execution of these concepts is as strong as ever. In the end, I think that both creators are making a great choice to leave the limelight while they are still on top. I just hope that whoever takes over the reins for Batman doesn’t leave me saying, “I love this world… but there’s something missing…”