Home COMICS The Top Ten Marvel Books of 2016: Counting Down to Marvel’s Monthly... 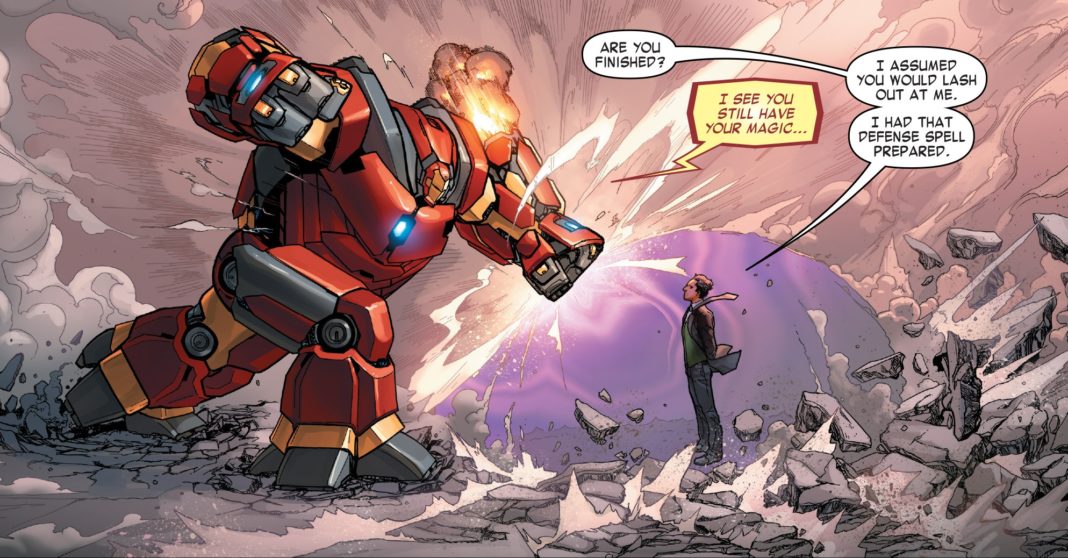 I think all fans would agree — Marvel Comics had one heck of a year. Think about it: Doctor Strange, Black Panther, Spider-Man, Ghost Rider, Punisher, and so many more made live-action debuts in 2016, plus Captain America: Civil War and Doctor Strange both made crazy box office bank. It was a good year all around for the House of Ideas, but listen, it all begins and ends with the comics, and Marvel had an awesome year in print as well. Great character and creator diversity, and some surprising story directions kept fans guessing all year. So, we’re here to celebrate the highlights with our top ten Marvel books of 2016. These are by no means Marvel’s only great books, but these are the titles that had us running into our local comic store every single Wednesday.

Yeah, that’s a heck of a lot of Iron Man, but it never got old, because through these four series that ran in 2016, writer Brian Michael Bendis and his team of A-list artists crafted a cross-title epic.

It all started with Bendis finally revealing Tony Stark’s true parentage, and in doing so, the writer delivered one of the most moving and surprising tales of the year. Through it all, Bendis was introducing new villains, new supporting cast members, and new shocking directions for mainstays like Doctor Doom. And and more importantly, Bendis introduced the world to Riri Williams, a young woman who is destined to be Marvel’s next great hero.

With artists Alex Maleev and Stefano Caselli, Bendis explored the life and times of Tony Stark in both the past and the present, and created an intriguing future by putting both Victor von Doom and Riri Williams into the famous armor of Marvel’s premiere star. Four titles with tons of shocks and new directions, what else can an Iron Fan ask for in a calendar year?

Writer Al Ewing and artists Travel Foreman and Kenneth Rocafort’s two volumes of The Ultimates was the place to go in 2016 for huge ideas. The creative team built on Marvel’s most cosmic ideas to create a mind-tripping tour through the biggest corners of the Marvel Universe. How big is this book? Well, what would you say if we told you that Galactus is a member? Yeah, it’s that big. But, Ewing and his crew never lose the human edge of this title as Ultimates and Ultimates 2 presented some of the most compelling takes on Captain Marvel and Black Panther that appeared anywhere in 2016. Plus, Ewing got to explore such awesome characters like Spectrum, Blue Marvel, and America Chavez.

Ewing’s The Ultimates never fails to surprise and delight and continues to be one of the best team superhero books on the market.

To sell Black Widow, all we have to say is, “Mark Waid and Chris Samnee.” That writer and artist combo defines quality and their work on Black Widow has taken this hall of fame character to the next level.

For a long time, fans were starved for a Black Widow solo comic, and Waid and Samnee delivered the ass-kicking goods in spades. For real, you guys — this comic can be used as a text book for teaching how to do an action comic. This year, Waid and Samnee have delved deep into the origins of Natasha Romanov and her time in the Red Room and have presented many new challenges for the classic Avenger.

Black Widow oozes class and style, and this series should serve as 101 guide for the inevitable Black Widow film. Seriously, Waid and Samnee have storyboarded the perfect Black Widow tale and we were lucky enough to experience the intensity in 2016.

Speaking of class, we have writer James Robinson’s Scarlet Witch. Every issue, Robinson and a new brilliant artist take fans on a walking tour of magic in the Marvel Universe.

Let’s face it, there has not been a whole lot of character progression when it comes to Wanda Maximoff this past decade. Instead of being a wholly realized character, Wanda is oft-times presented as a plot point rather than a round, complex character. This was the case until Robinson got his hands on the Scarlet Witch. In this series, Robinson has explored every aspect of Wanda as a woman, hero, and witch. He has created a yearlong character study into one of Marvel’s greatest female heroes, and while doing so, Robinson has also looked into every magical corner of the MU.

Scarlet Witch has been a melding of Vertigo Comics sensibilities with Marvel Universe mythology in a perfect blend of horror and heroism. Don’t overlook this book!

Dan Slott never disappoints on Amazing Spider-Man. Throughout 2016, Slott has found bold new directions for Peter Parker and his extended family of heroes and villains.

We end the year with Clone Conspiracy, a title that has brought back just about every dead Spider-character in a big bad way and has also presented a very new type of Spider-villain. After Slott gets done, “Clone” will no longer be a curse word in the Marvel Universe.

Writer Christos Gage also comes by from time to time to lend a hand in a book that is always reverent to the past but also mindful of the future. Heck, Amazing Spider-Man has been so big, that Marvel usually kicks off whole lines of Spider-Man-centric books that satellite around Slott’s main event. Let’s face it, as long as Slott and friends are on Amazing Spider-Man, this flagship Marvel title will make our top 10 list every single year.

2016 was an important year for Doctor Strange. Marvel’s Sorcerer Supreme made his film debut (it rocked) and was all over Marvel Comics as writer Jason Aaron and artist Chris Bachalo found an in to make Doctor Stephen Strange the A-list character he always deserved to be.

The creative team found a level of horror and humor to make Marvel’s Doctor Strange comic series one of the most original, daring, experimental, and darkly funny books on the stands. This year, Aaron and Bachalo stripped Strange to the bare bones by taking away the majority of his powers and pitting the sorcerer against a magic-eating race bent on the eradication of the magical arts. But Strange prevailed, and fans got to witness one of the most gripping battles in the history of the character.

Doctor Strange has traditionally been a tough sell, but Aaron and Bachalo have found the magic formula and the Marvel Universe is a better place for it.

Sweet Christmas, 2016 saw the return of Marvel’s greatest crime-busting buddies, Power Man and Iron Fist. It’s amazing that it has been so long since Daniel Rand and Luke Cage have appeared in a shared title.

Power Man and Iron Fist was the book everyone wanted but just never happened. But now it’s here, and it’s one of Marvel’s best. Writer David E. Walker and artist Sanford Greene have brought Fist and Cage back to their street-level roots and in doing so, the creative team has crafted a compelling, energetic, hilarious tour through the history of both characters. For real, there just isn’t better banter in any comic currently on the market.

So, there’s this little sci-fi franchise called Star Wars, and people seem to like it. This year, Rogue One: A Star Wars Story really caught the tone and aesthetic of the original 1977 Star Wars, but that recapturing of the magic is old hat for fans lucky enough to be reading Jason Aaron’s monthly bit of Star Wars perfection.

Every issue, Aaron and one of his awesome artists deliver a grand Star Wars adventure so reverent to the original film that you can almost hear the swelling John Williams score. Aaron just has the voices of the original heroes down, and reading them is like returning home.

This year, among other adventures, Aaron presented a heist that saw the heroes of the Rebellion swipe a Star Destroyer, the introduction of a new squad of elite Stormtroopers, and a number of flashbacks to the past with Obi-Wan Kenobi and most recently, Yoda.

Marvel’s Star Wars comic is the perfect aid to help you get through those long months between films, and you know what? Just between us, many times Jason Aaron surpasses those films.

Hey. It’s that Aaron guy again. He must be doing something right. With Mighty Thor, Aaron has presented more adventures of Jane Foster Thor, and the deeper Aaron delves into her character, the more compelling she becomes.

A good portion of this year has seen Foster go up against Malekith as the Dark Elf made his bid for the throne of Asgard. More importantly, Aaron has presented one of the most tragic and bravest heroes of a generation. As fans know, Foster is suffering late stage cancer, and when she becomes Thor, she is undoing her treatments. Essentially, to save the universe, Foster is killing herself.

With Foster, Aaron has presented one of the most realistic and painful looks into a cancer sufferer’s life ever seen in a mainstream comic and has crafted a hero like no other. Jane Foster is Marvel’s most inspirational hero, and in 2016, Aaron delivered story after story worthy of this most noble of worthy champions.

What more can be said about Marvel’s finest hour? The Vision is a postmodern sci-fi horror that’s like Stephen King meets David Lynch with a little John Hughes thrown in for good measure.

In 2016, writer Tom King and artist Gabriel Hernandez Walta closed the book on The Vision, a book that never should have worked, but thanks to the creative acumen of the talent involved, it not only worked, it took the Marvel Universe to the next level. Instead of creating a standard superhero comic, King and Walta presented a nightmarish look into what it means to be human and hit all the same notes about AI and technology that blew people away on HBO’s Westworld. But you know what?  King and Walta’s The Vision did it better, and and I say this as a fan of Westworld.

The Vision was a groundbreaking comic that had both feet firmly planted in the history of the Marvel Universe. It was one of those rare comics that could shock and delight fans of every generation and through it, King proved that he is a writer that can handle family drama, super-heroics, and intense horror. The Vision is Neil Gaiman Sandman-level good, and this is not something I say lightly. 2016 was a great year for Marvel, but The Vision stands alone when it comes to comic books that push the genre and medium to the next level of greatness.