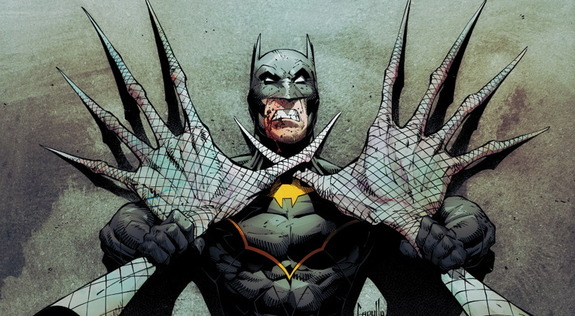 It’s time once again for our weekly dose of comic book guidance. It’s a busy market, and we are here to help you spend some of your hard earned cash on some truly great comic book coolness. So, if you have some money burning a hole in your pocket, check out some of these cool comics:

I am really looking forward to reading all of Secret Wars in one sitting because I have a feeling this slapdash publication schedule is really harming the narrative. That being said, this is still an intense Marvel story that plays with many different Marvel icons and gives everyone his or her moment. Most of the big, crazy stuff (zombies, Hulks, etc) is happening in the background, while the main story arc sees the Fantastic Four at odds with Sue, Franklin, and Valeria siding with Dr. Doom and Reed and Ben Grimm on the side of the angels. At the core of this magnum opus, this is a Fantastic Four story and it reads like one, so if you miss your semi-regular dose of the FF, you should be checking out Secret Wars. The art is beyond gorgeous and goes big, really big. How big? How about a giant Ben Grimm slugging it out with Galactus? Yeah, that big. Some of the highlights of Secret Wars #8 includes Star Lord versus the Hickman-created Black Swan, and  some pretty intense Thanos goings-on as well; if you’re a fan of Thanos, this is your book.  So, we have a bit of Hickman’s Infinity in here, a lot of his Fantastic Four, and a heaping spoonful of his Avengers, so really, if you like the last half a decade of Hickman’s output, this book is for you.

Big Picture: All that being said, this isn’t the game changer Marvel promised. It’s big, brash, bold, fun, and bugnuts, but it’s running so darn late that we already know what the MU looks like after the last shot of  Secret Wars is fired. And you know what, other than Miles Morales hanging around and a lack of an FF, it all kind of looks and feels the same. Bottom line, so far, Secret Wars fulfills the promise of being a great story but it does not fulfill all those ominous sounding marketing promises Marvel dropped half a year ago.

Boy, if cracking open a Marvel Star Wars Annual doesn’t transport you back to the heady days of the early 80’s, nothing will. However, this Annual from the writer of Star Wars: Darth Vader is definitely worthy of the Marvel Star Wars legacy. This extra sized annual features a rebel spy embedded on Coruscant. His mission? To free a cadre of Rebel sympathizers from an Imperial prison, AND…to kill Emperor Palpatine his own darn self. This book highlights just what a Machiavellian gamesman the Emperor truly is and if you thought Gillen’s Vader was badass, wait until you witness his Palpatine. The rebel spy is an intriguing new player in the Marvel Star Wars saga and this book really shines a dark spotlight on just how outgunned the Rebels truly are. Pure Star Wars magic by Gillen, a writer who, when it’s all said and done, might prove to be the greatest Star Wars comic book writer of all time.

Big Picture: Guys, The Force Awakens is almost here and Marvel made the wait almost bearable with some truly great Star Wars comics. This is a very worthy addition to Marvel’s growing must read Star Wars material.

For the past decade or so, Wanda Maximoff, the fan favorite Avenger known as the Scarlet Witch, has been used almost exclusively as a plot device. Now, some of the stories that sprung from Wanda’s chaos magic have been some of the best Marvel stories of the last ten years, but somewhere in there, the character known as the Scarlet Witch, the brave and mega-powerful woman who was pivotal to so many Avengers stories, was lost. Well, I’m very happy to say that James Robinson and Vanesa Del Ray found Wanda and plopped her in the middle of very personal, magical adventures in the pages of  Scarlet Witch #1. The first issue of this new monthly is a true thing of beauty. It is the sister book to Doctor Strange and deftly explores the history of witchcraft and female-based magic in the Marvel Universe. This first issue felt like the perfect melding of Vertigo Comics sensibilities with the more traditional vibe of classic Marvel. Wanda is no longer a passenger in her own story but a full player, wonderful and powerful. Welcome back, Scarlet Witch; you have been missed.

Big Picture: Avengers: Age of Ultron exposed new fans to the wonderful character of the Scarlet Witch, and now her fans, old and new alike, have a place to go to read about the further adventures of this classic character. Bravo to everyone! May this book be blessed and stick around awhile.

Batman under Snyder and Capullo has long been DC’s most consistent and quality-filled title since the New 52 began, so it’s always nice to check in as these two master creators unravel their Batman opus. Now, let’s be honest, James Gordon as Batman should not have worked, but it really does, and that has to do with the heroic earnest infused into the character by the writer and artist. This issue features Gordon continuing his battle with the horrifying Mr. Bloom. That’s the main event, but the moment that will have fans talking is the ending where Bruce Wayne begins to remember his past and meets an old – well, ‘friend’ would be the wrong word. I know there are only a few weeks left in 2015, but with Batman #47, Snyder and Capullo may have crafted the cliffhanger of the year.

Big Picture: I may be wrong, but it kind of feels like Snyder and Capullo are winding down their run. This issue feels like a pivotal turning point as we enter act three and people should be talking about this one for a long time.

Let’s wrap things up with a new direction for Catwoman. First off, good lord, can Inaki Miranda draw! This is some of the best art I’ve seen on Catwoman since the Darwyn Cooke days, and that’s for ‘realisies’. The story is pretty much a paint by numbers Catwoman tale, but a good one; it features Selena Kyle trying the ultimate heist in order to help a dying friend. Nothing new here, but in these days of constant reinvention, playing the classics is something refreshing, especially when the book is this gorgeous.

Big Picture: The classic cat burglar, Robin Hood-like fatale is back. This one isn’t going to grab any headlines, but a fun read nonetheless.