So what about that forever-in-development, robustly speculated and oft-mentioned modern SPAWN movie Image Comics’ co-founder Todd McFarlane has been going on about? Well, on a recent episode of Kevin Smith’s AMC series Geeking Out, DC All Access and CW Fan Talk presenter Tiffany Smith asked the legendary creator about his rumored, cinematic SPAWN opus.

“The simple answer is yes,” McFarlane told Smith when she asked about the possibility of said SPAWN flick. He also assured her that this new movie WOULD NOT be a continuation of the 1997 film starring Michael Jai White and John Leguizamo. Nope, this one will be “a dark, R-rated, scary, badass sort of script.”

He also mentioned that “the world’s going to be real, except for one thing that’s going to move,” and “you’re never going to see a dude in a rubber suit….This is going to be my Jaws shark,” as he pointed to some SPAWN concept art.

Now, McFarlane’s been hard at work on the script for quite some time. Script-status update?

“I’ve finished the script, and I’m in the process of editing,” McFarlane said. “It’s 183 pages, and [producers] usually like 120. I still think it’s going to end up being about 140, because I’m putting in details for myself.”

Created, written and drawn by Todd McFarlane, Spawn tells the tale of Al Simmons, a talented Marine and later a special operative for the CIA. Becoming disillusioned with the clandestine, black-ops missions performed by the agency, his assassination was ordered by Jason Wynn, and perpetrated by Simmons’ friend and partner Bruce Stinson (codenamed Chapel). Where did Simmons’ soul end up? Why, Hell, of course, since he knowingly killed innocents while working for the CIA. In a “deal with the devil,” Simmons granted the “devil” his soul for a chance to reunite with his wife. So, yes, he was returned to Earth, but five years later and in the form of a demon. Whoops.

So, no official release date, but it seems the SPAWN movie train is truly starting to roll. What do you think? 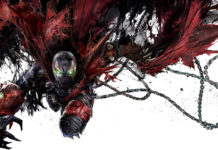 Things We Want to See in the Spawn Movie Reboot