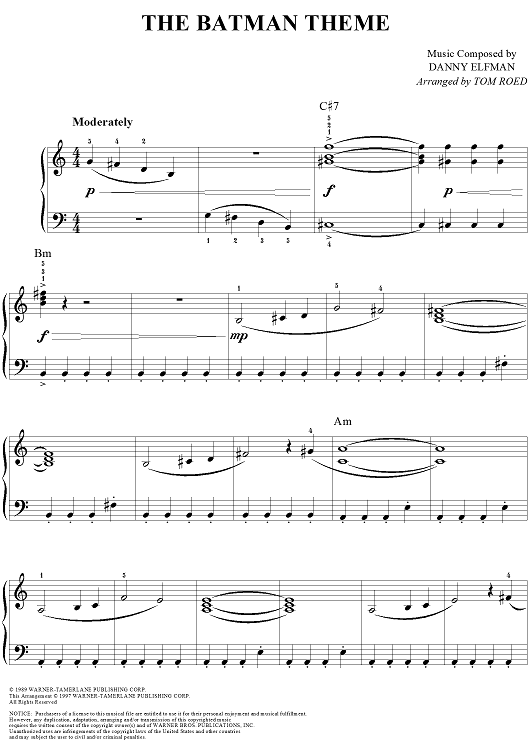 One of the key ingredients to any movie is the music. Sure, the set and costume design play huge factors, but music plays a massive part in any movie. It can set the tone for a whole movie like the main title theme from Jaws, or emote what someone is feeling like “Binary Sunset” from Star Wars. Since the comic genre has boomed in the past 15 years, it’s time to rank my favorite comic book movie musical scores.

Composed by Hans Zimmer, this was essentially the theme song for Christian Bale’s Batman in the 2005 reboot, and the rest of the Dark Knight Trilogy. You can hear elements from “He’s a Pirate” from Zimmer’s score of Pirates of the Caribbean: Curse of the Black Pearl. I’d rank it higher, but it seems to be the same three notes over and over again.. “X-Men Theme” from X2: X-Men United

A great piece composed by John Ottman, it has a varying range of styles and tones. At times, it sounds calming, and other times it sounds like it’s preparing for battle, much like the X-Men. It reminds me of John William’s “Raider’s March” from Raiders of the Lost Ark. It fits the X-Men perfectly and was missing from X-Men: First Class and X-Men Origins: Wolverine.

It was such a great arrangement from Hans Zimmer. The way the music builds before Superman takes flight for the first time was perfect. The music went along with the scene, corresponding perfectly to what was happening on-screen.

6. Main Theme to The Avengers

This is one of the standout themes from this decade. And let’s be real, the only memorable music from Marvel Studios’ library. Sure, “Star Spangled Man with a Plan” from Captain America: The First Avenger stood out, but that’s a song with lyrics. We are sticking to orchestral music. Alan Silvestri (composer of the Back to the Future soundtrack) made a wonderful theme song for Earth’s Mightiest Heroes. The way it uses high hats, and I think horns and a tuba(?), make a great soundtrack for Nick Fury’s modern day howling commandos.

5. “Is She with You?” from Batman V Superman: Dawn of Justice

As soon as Wonder Woman came on screen to save Batman from Doomsday in BVS, this music blasted in the theater and the audience erupted into applause. Hans Zimmer and Junkie XL give the Amazon Warrior a great intro/theme song with the use of bass drums banging along to a wailing guitar, giving the piece a mix of ancient tribal music and modern day metal. It was also used in both Wonder Woman trailers.

4. Main Theme from the Spider-Man films

Danny Elfman does an amazing job scoring the main title theme from the original Spider-Man films. The tempo, the buildup, the use of a choir — all perfectly blended with an orchestra — leads to a spectacular piece of music! This sensational sound took the 2002 film to another level.

This is where we get to the meat and potatoes of this article. Fresh off of Jaws and Star Wars, John Williams scored the soundtrack to the 1978 Richard Donner film starring the iconic Christopher Reeve as Superman. The theme is energetic and gets you excited.

They strayed from this theme in Superman III (as bad as it was, we wouldn’t have the masterpiece that is Office Space without it). This is so influential, it seemed like every theme song for a new iteration of Superman, until Man of Steel, was a variation on this theme. In a way, it became part of the Superman lore.

2. The Main Title from Batman

As great as the Superman theme is, Danny Elfman’s theme to Batman is just a hair better. The score sets the tone for the entire movie, with the eerie beginning similar to a 1930’s horror or suspense thriller. My dad said that when he saw Batman in theaters opening night, the music immediately mixed with the darkening sky behind the Warner Brothers logo. He knew right away it was going to be a good movie.

The way John Williams uses the slow buildup of music to introduce Krypton is amazing. As soon as we see the main city — if you want to call it that — the music changes to a more uplifting tone. The music perfectly corresponds to what is happening on-screen. I really can’t put it into words as to why I like this particular song so much.

Agree with my list? Are you a fan of other comic book movie scores? Let me know in the comments section below!