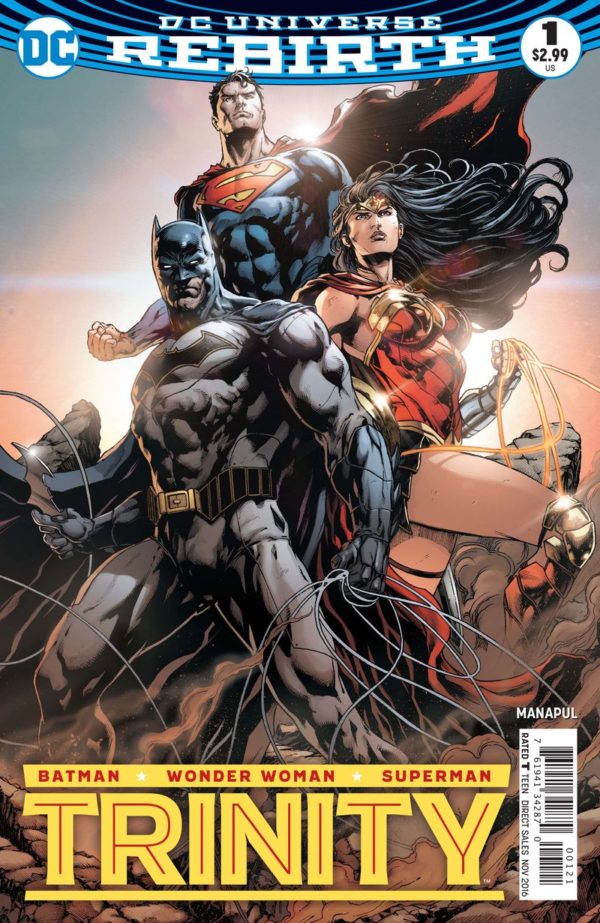 Check out Our Review [WITH SPOILERS] for Trinity #1!

One of the major issues going into Trinity #1, DC’s latest book which teams Superman, Batman and Wonder Woman, can easily be expressed with the following question: does this book need to exist? I mean, we have a ton of Superman and Batman titles already and we have a bi-weekly, Eisner-worthy Wonder Woman title currently rocking and rolling, so is there enough story space for a title starring all three of DC’s biggest icons? I mean, you can see the marketing need for it, after all, the three heroes did sizzle up the big screen in Batman v Superman: Dawn of Justice, but is there a narrative need?

That question is still open, but the first issue seems to answer with a resounding “yes.” This book exists because, as fans of DC’s current Rebirth slate of books know, this is a new Superman (or an old Superman depending on your POV) in the DC Universe. With the pre-New 52 Superman taking his place in the Rebirth world, this triple threat title allows writer and artist Francis Manapul to explore the burgeoning friendship between the Trinity.

There’s the question of how Wonder Woman feels now that the Superman she loved is gone and a new, married with child Superman has arrived. Trinity #1 is a beautifully drawn meditation on each of the three characters as they have to get used to one third of the Trinity being somewhat of a stranger.

Through all that, there is a classic DC vibe to this debut issue. There’s even a glorious Manapul splash of the classic Robin fighting side by side with a rainbow-suited Batman. Yeah, Robin-shorts and all, with a rainbow Batman. Who says DC is ashamed of its past?

There’s not much story space covered in this premiere issue with most of the action taking place during dinner on the Kent farm (Wonder Woman brought a freshly killed boar), but it’s clear that Manapul has the voices and visual language of DC’s three core characters down. Let’s hope he finds a story big enough for the three legends.