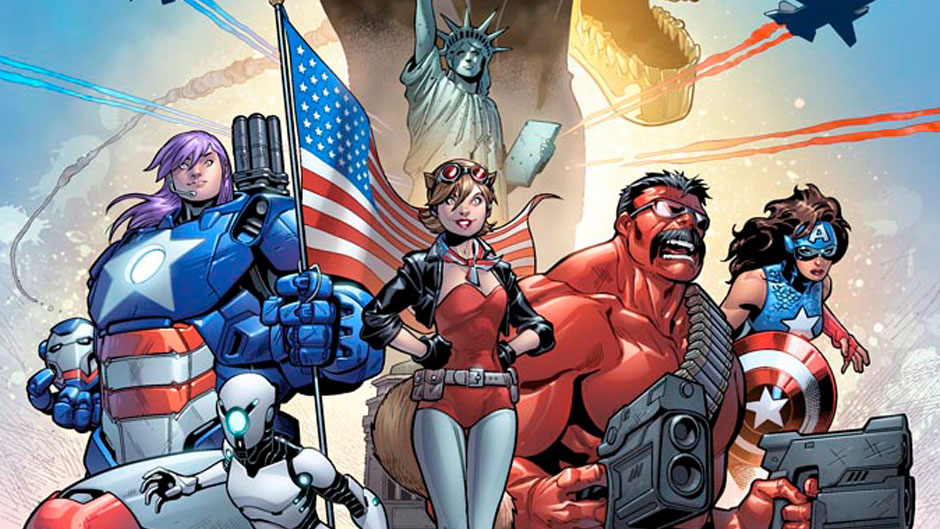 In the aftermath of the second superhero civil war, the United States of America realizes that they need heroes they can trust! In their hour of need, they will call upon A.I.M (American Intelligence Mechanics) and their own ragtag super-team: Red Hulk, Squirrel Girl, Cannonball, Iron Patriot, Enigma, Citizen V, and the Captain America of the future! Together, they fight the biggest, toughest, craziest threats there are as the U.S.Avengers!

So, full disclosure, I didn’t have high hopes for this series when it premiered. It seemed like it was going to be a G.I. Joe rip-off with Avengers in the name. Man, I am so glad I was wrong, because U.S.Avengers is a whole lot of fun!

With issue one, this series hits the ground running with tons of high-octane action! Everyone gets their time to shine with their abilities on display, all of which is well complimented by the artwork of Paco Medina, who manages to create a fun, adventurous feeling.

The real icing on this cake is the writing. Al Ewing manages to make a team of lesser-known heroes instantly likeable and memorable. I also like that each member of the team gets an interview. There are some nice character moments where they tell us what patriotism and being an American means to them. I thought it was a nice touch that helped bring us up to speed on these characters.

Then there’s the story, which is, to put it simply, super-crazy!! The series starts with the heroes fighting villains in their volcano lair, and then introduces us to time-traveling pirates! Just saying that last part out loud sounds insane!! It also helps that Ewing makes the villains entertaining, too (I love that they’re from the future but dress like old-school pirates).

The Golden Skull and his goons aren’t trying to take over the world or get ultimate power; they’re just trying to get rich. And you know what, there’s something oddly refreshing about that simplicity.

As ridiculous as it all sounds, U.S.Avengers is exactly what the doctor ordered. In the aftermath of Civil War II, there’s been something of a tone change with the new status quo. The heroes are divided, and it feels like everyone keeps making morally gray choices. I’d be lying if I said I didn’t understand why some fans have felt burnt out on Marvel recently. That’s why this series is such a nice change of pace.

U.S.Avengers is free from the moderatle bleakness of the rest of Marvel NOW 2.0 and does whatever it feels like.

Issue one sets up the team, while issue two examines our villains in this story arc. So, with that out of the way, I’m excited to see how issue three continues things.

If you’re in the mood for something a little different, then I say pick up U.S.Avengers! Packed with likeable characters, good art, and a crazy story with wild action, it’s definitely worth your hard-earned money-bits. America’s mightiest heroes have never assembled quite like this!