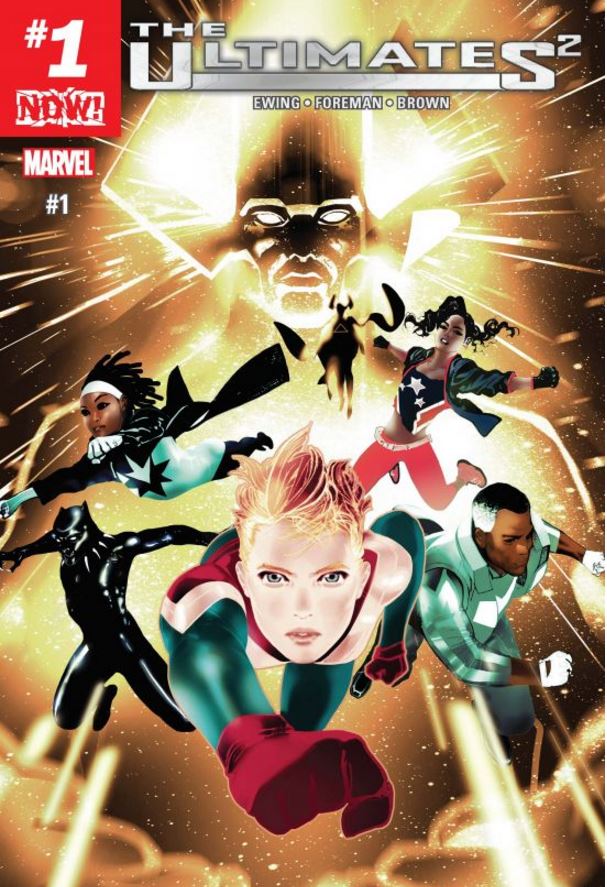 Gang, our Ultimates 2#1 review is a little SPOILER-Y, so…check back with us after you’ve read the issue. Oh? Still here? Thank you!

Ultimates 2 begins with Eternity chained up by an unknown entity and it just gets more wonderfully trippy from there. Al Ewing’s Ultimates has been like taking an old school Jim Starlin comic, ramming it at subatomic speed into a Grant Morrison comic, and then reading it after depriving yourself of sleep for six days. It’s just that trippy.

In all seriousness, before Civil War II, Ewing’s Ultimates was one of Marvel’s most experimental and energetic books. It was filled to the breaking point with huge ideas, balls to the wall action, deft characterization, and most of all, it never took itself too seriously. Sadly, Ewing’s Ultimates got derailed a bit thanks to the second Civil War. After all, it was hard to have a team led by Captain Marvel not be majorly impacted by the event. So, while Carol Danvers took center stage, some of the other Ultimates were relegated to second fiddle status.

Well, with Ultimates 2, the whole team is back in a big, bad, cosmic way. Like I said, the issue starts with Eternity in bondage, and from there, Ewing takes readers on a magical, mystery joyride through some of the more theoretically mind-boggling ideas through the MU. The debut issue also introduces a new status quo as far as Danvers is concerned and reminds readers just how cool characters like Blue Marvel and America Chavez can be. In addition, the issue plays with Black Panther in a very unique way as Ewing finds some rare comedic moments for the usually intense T’Challa.

And it all ends with a new mission with Galactus, the Life Giver. Intrigued? You damn well should be because Ultimates 2 is the place to be for the boldest and most cosmic Marvel action. And if that’s the mission statement for this book, Travel Foreman will handle the art chores very nicely because, as he proved in Ultimates 2 #1, Foreman can artistically handle huge ideas and push those ideas visually to match Ewing’s grand plan.