Home MOVIES Is This Classic Star Wars Character Appearing in Rogue One? 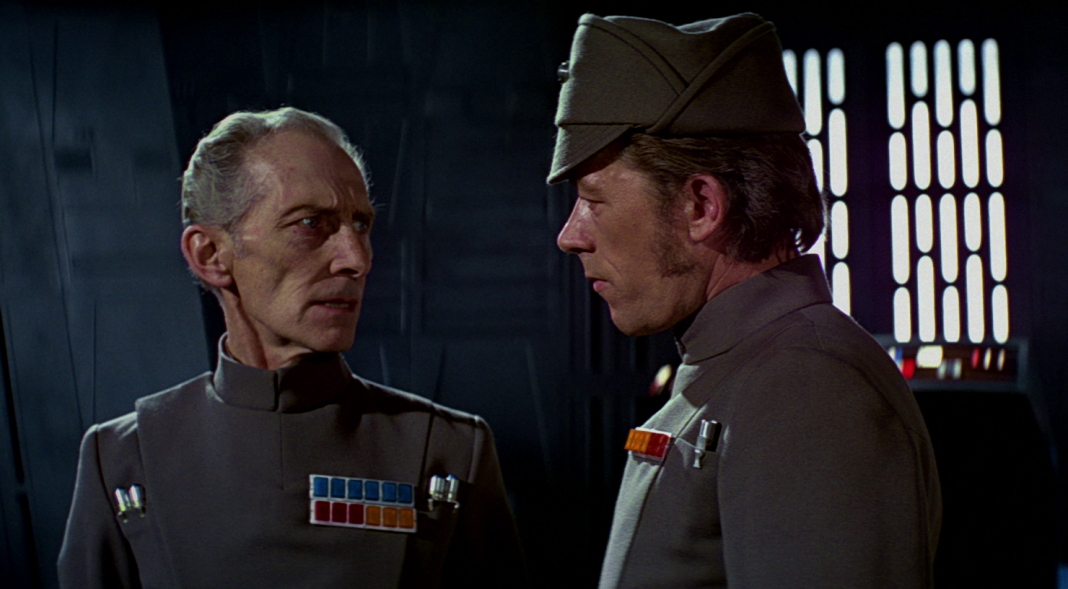 Before we get going, know that this article could contain spoilers for the upcoming Rogue One movie. So, if you want to see the movie immersed in blissful ignorance, stop reading and turn back now! Fine. You’ve been warned.

Is your excitement for Rogue One boiling over? With every passing trailer, it seems like there’s some new connection to past Star Wars films, and additional links to The Clone Wars with the inclusion of several characters from the beloved TV series. Just when you think they can’t squeeze any more Star Wars mythos into Rogue One… Director Gareth Edwards adds another surprise to the mix in the form of a classic villain.

We’ve known for some time that Darth Vader is showing up; he’s been part of the marketing since the beginning. However, he’s not the only Empire-loyal character making an appearance; if that’s his misshapen, thinning noggin in the latest Rogue One TV spot, it appears Grand Moff Wilhuff Tarkin will also try to stop the rebels from stealing those pesky Death Star plans.

Now, this shouldn’t come as a surprise. Tarkin has been a central figure in the Star Wars Universe since he first appeared in A New Hope (played by Peter Cushing), and his sheer confidence and controlled demeanor made him an imposing threat. Tarkin is such a popular character that he turned up in The Clone Wars and Rebels shows and even received his own origin novel.

Tarkin also turned up in the Rogue One storyline as part of the Catalyst prequel novel. In it, we learned the future Grand Moff had a not-so-friendly competition with Rogue One baddie Orson Krennic, considering the two were up for running the “under construction” Death Star. Perhaps we’ll get to see more of the Krennic/Tarkin duel on the big screen.

The interesting part of the Tarkin rumor is seeing how the character will be brought to life. Cushing died in 1994, so there’s always a chance of recasting the role. However, Cushing had such a unique look, with his high cheekbones and long face, that it will be hard to find someone to replicate that image. Rogue One already struck gold with the casting of Genevieve O’Reilly as Mon Mothma (originally played by Caroline Blakiston), but it’s hard to imagine they can find someone who looks similar to Peter Cushing.

So, Gareth Edwards might have to turn to CGI in order to recreate the character. Now, we’ve already seen Marvel successfully create younger versions of Michael Douglas (Ant-Man) and Robert Downey Jr. (Captain America: Civil War), so maybe they can assist their Mouse-House companions in developing a younger Cushing. Using a 100% CGI character seems like a tricky proposition, but considering how amazing everything has looked so far with Rogue One, I wouldn’t be shocked if they brought Grand Moff Tarkin back to life with some top-notch special effects wizardry.

So, with the inclusion of Darth Vader and Grand Moff Tarkin, you’ll have to assume that Emperor Palpatine will be making an appearance. Rogue One sold itself as something separate from the Skywalker-based storylines, something that was going to pave its own path. However, the film still seems to be incorporating the fantastic elements of its predecessors. By including characters like Tarkin, Lucasfilm is really making Rogue One the can’t-miss movie of the winter season.