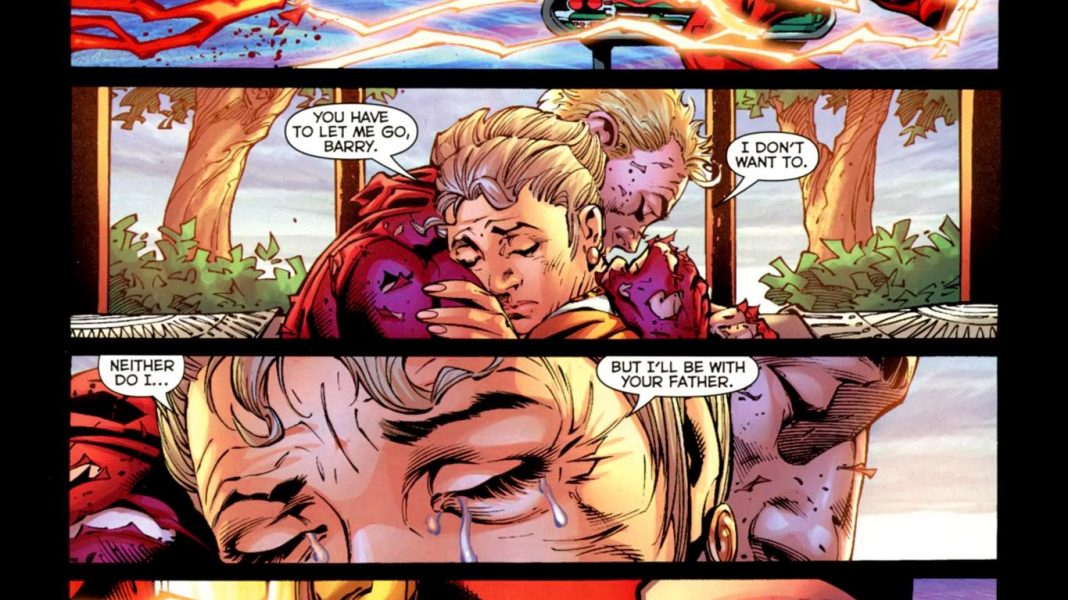 Because of The Flash Season 2 ending with a universe-altering bang, we Flash fans have been buzzing with excitement for what’s in store for the next season. Grant Gustin himself confirmed the Flashpoint storyline with his “this is not a drill” Tweet, and with that kind of juicy knowledge, how can we not speculate further on what’s about to come?

In 2011, DC Comics released an epic crossover event called Flashpoint, which launched the whole New 52 thing afterwards. In Flashpoint, Barry Allen tampered with time by going back to save his mother from being murdered by the Reverse Flash, which is exactly what happens in the finale of Season 2. In doing so, Barry doomed the whole universe in the comics by triggering a string of domino-effect changes in the timeline, including a bizarre world where Captain Cold was Central City’s hero and Batman was Thomas Wayne. hThis alternate timeline followed a powerless Barry and a very much alive Nora Allen—sadly, the Justice League did not exist, and Superman had been locked up by the government since…forever.

CW’s Flash doesn’t really have an actual Justice League despite its crossovers with the Arrow-verse, but if they’re actually doing Flashpoint, could we possibly start seeing some capes flying around and a Dark Knight detective sneaking about? It is, after all, an alternate timeline, so it’s possible to introduce members of the Justice League that are not based on existing shows and actors. Could Jeffrey Dean Morgan reprise his role in Batman v. Superman as Thomas Wayne? And will we witness that letter thing with Thomas Wayne that he entrusts to Barry before he croaks? (Excuse us while we grab some tissues—it’s just so damn dusty in here.)

We might see Supergirl in there somewhere, too—after all, Greg Berlanti already had her cross paths with Barry before. What’s probably more certain is Citizen Cold as Central City’s hero, as Wentworth Miller is already heavily entangled with the Flash storyline in the show.

This is by far the most exciting concept that I’m looking forward to, just in case the show really does push through with Flashpoint faithfully. In the comics’ storyline, the world is on the brink of massive death and destruction due to the war between Atlantis and Themyscira, with Aquaman and Wonder Woman at the helm.

Among the other CW shows, Flash is the one with the most liberties to introduce fantastic elements because of the nature of its time-altering shiz, and who’s to say we won’t see these two nations at war in the next season? Sure, we haven’t had a single mention of Atlanteans and Amazons from Themyscira so far, but they can always be introduced because…why the hell not? So please, showrunners, blow our minds with this storyline because that would just be so effing cool.

So a recent announcement just revealed that Hal Jordan’s sister-in-law will make an appearance in Arrow’s next season, bringing Coast City and the Emerald Knights closer to reality. We’re not quite sure if this is within the show’s actual storyline, or if it could be a result of the alternate universe created in Flash that could affect the Arrow-verse, too. We already know that events in Flash often have repercussions in Arrow, Supergirl, and even Legends of Tomorrow.

It’s also been announced that there will be a super-crossover for all four of these shows in the fall, so Flashpoint could be the catalyst that would bring all four shows together. And I know this is a long shot, but could we also see an alternate Gotham where Martha is the Joker, just like in the Flashpoint comics? The possibilities are endless!

Aside from the Flashpoint event, one of the storylines in The New 52 was the Speed Force causing multiple residents in the city to acquire super-speed, including a new villain named Godspeed. Since we’ve already seen Wally West and Jesse Quick get hit by the residual Speed Force in the show, they could very well develop super-speed as well. And speaking of speedsters, now that the father-figure role is presently vacant (with Barry’s dad, Wells, and fake Jay Garrick gone), this could be the perfect opening to introduce Max Mercury as Barry’s elder and counselor. Somebody’s got to keep Barry in check and guide him through his trials, and there’s no better mentor than the so-called first speedster.

What are your personal predictions for Season 3 of The Flash? Sound off in the comments section below!