Home COMICS Superheroes Who Defined the Four Great Eras of Comics – Part I:... 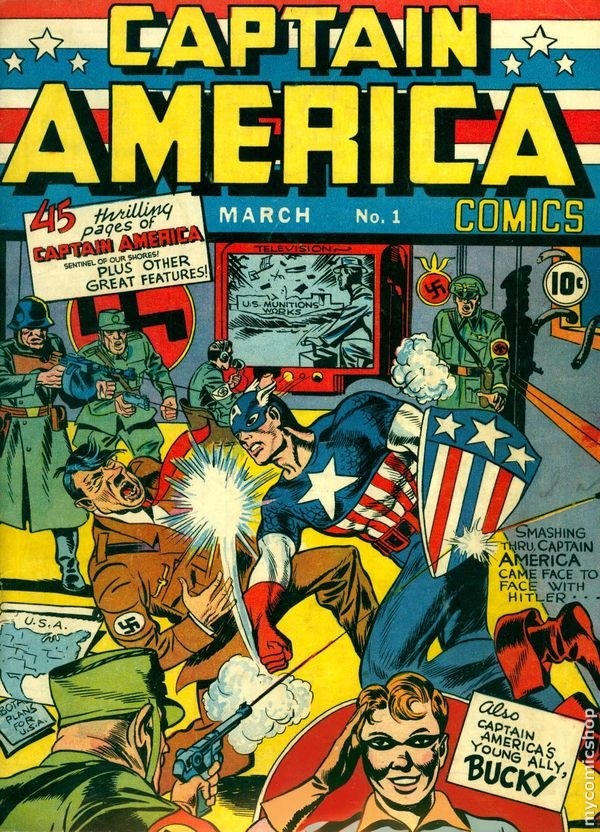 Every era of every form of entertainment has certain milestones and landmarks. In the comic book industry, there are key superheroes and issues that define or exemplify the following four eras of comics: The Golden Age, the Silver Age, the Bronze Age, and the Modern Age. Here, we are going to go back in time and explore each era debating which characters or stories defined that age of comic books.

Why: The Star-Spangled Man with a Plan was Marvel Comics’ biggest success in the Golden Age. Sure, the Submariner and the original Human Torch came first, but Captain America took Marvel (then called Timely) to a whole new level!

What made him stand out from the rest on the newsstand back in the day was that he was fighting a real threat: the Nazis. Mad scientists and bank robbers didn’t impact a reader as much as a villain heard about on news radio or read about in the paper on a daily basis.

Why: Superman is the hero who started the whole superhero trend, plain and simple.  The Man of Steel set the standards for all superheroes: have a secret identity, a colorful costume, amazing abilities and multiple villains.

He inspired a ton of copycat heroes, like Captain Marvel (or Shazam as he goes by these days). In addition, Superman is the first comic book hero to have his own exclusive comic book! Without Jerry Siegel and Joe Shuster’s creation, this website probably wouldn’t even exist.

Honorable Mentions: Brave and the Bold #28 (first appearance of the Justice League of America), the Incredible Hulk, the X-Men and Green Lantern.

Why: When Stan Lee and artist Steve Ditko’s creation hit the panels back in the 60s, he was a game changer. First, he was a teenager when all other superheroes were adults. Second, unlike other comics at the time, you got a peek into Peter Parker’s life when he wasn’t Spider-Man and actually got to know him. Also, the stories Lee, Ditko, and artist John Romita told are the stuff of legend and still stand the test of time to this day.

Why: Spider-Man may be Marvel Comics’ most popular character ever, but the Fantastic Four is the team that put Marvel on the map! Stan Lee and Jack Kirby ushered in a new kind of storytelling when they told the tale of a doomed space mission with Reed Richards, Sue and Johnny Storm, and Ben Grimm.

Classic tales were told during Lee and Kirby’s run on The Fantastic Four like “This Man, This Monster”, “The Coming of Submariner”, “Those Who Would Destroy Us” and their masterpiece, “The Galactus Trilogy.”

Why: The superhero genre was all but dead after Frederick Wertham wrote his famous book, Seduction of the Innocent in 1954. Sales for a lot of comics tanked and some publishers like EC Comics shut their doors. In his book, Wertham vilified comic books saying they were the reason for juvenile delinquency.

However, in 1956, Barry Allen debuted as The Flash in Showcase #4 and the superhero genre was revitalized! The Scarlet Speedster anchored the Silver Age. His success led to DC revamping the Green Lantern with Hal Jordan and the creation of the Justice League of America. Comic books were never the same again.

Why: This is where we’re going to talk about specific books instead of characters. The Exorcist hit it big at the box office in the 70s and there was a renewed interest in Satan. The comic medium lacked that devilish charm and Marvel Spotlight # 5 delivered it with the first appearance of Johnny Blaze as Ghost Rider!

The devil’s bounty hunter took readers by storm and eventually got his own series. It was really different from other Marvel books at the time, since the hero was an agent of Mephisto, Marvel’s version of Satan.

Runner Up: The Amazing Spider-Man #129 (first appearance of the Punisher)

Why: There was a real tonal shift in comic books in the 70s. Up until The Amazing Spider-Man #129 hit the newsstands, the good guys were clear-cut good guys. All that changed when the Punisher had Spider-Man in his crosshairs. Frank Castle was the first comic hero to kill his villains and not by accident or by happenstance — he shot to kill. He struck a chord with readers, which led the way to the rise of the anti-heroes like Wolverine.

Why: Conan the Barbarian was Robert E. Howard’s creation back in the pulpy days of comics and literature. Marvel adapted the hero in 1970. Adapted by Marvel in 1970, Conan the Barbarian was different from the rest of the Marvel catalog because it wasn’t a superhero book; Conan was a warrior. Describing the character won’t do it justice, so I’ll let Vincent D’Onofrio as Howard in The Whole Wide World do the talking.

A lot of comic historians pinpoint this book as the beginning of the Bronze Age. I can see why. It was very different from what was out on the market at the time. Sure, the “Tales of Asgard” backup stories in Journey into Mystery have similar tones, but they’re only a few pages long. Conan the Barbarian just delves right into the world of Cimmeria, an entire book taking place in a mystical world of warriors, wizards, and mythical beasts.

That brings us to the conclusion of part one as we go through the ages and decide what books best represented their distinct eras in comics. Be sure to read part two!