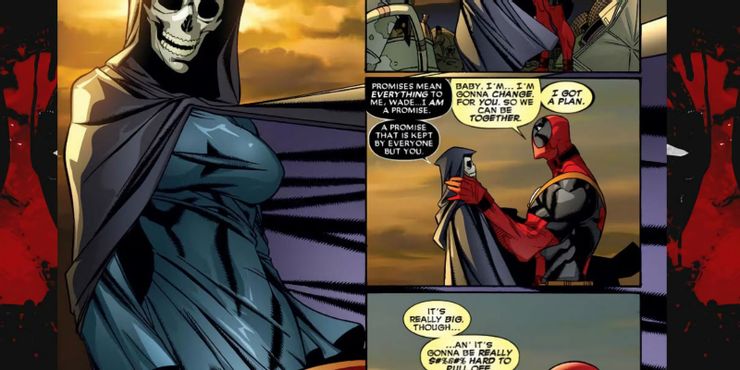 Now that it’s been confirmed that Ryan Reynolds is already working on Deadpool 3, it’s time for another speculative piece on the best Deadpool comic book storylines we’d love to see in the film. From wooing Death to challenging the Incredible Hulk to a match, there’s nothing our beloved Merc With A Mouth won’t do to keep us entertained!

The movies did a really good job at portraying Deadpool’s penchant for breaking the fourth wall, with Wade talking to the camera every now and then. The comic takes it one step further with ”Whatever Happened to the White Caption Boxes?” in 2013. The Annual #1 by writers Ben Acker & Ben Blacker and artist Doc Shaner introduced the character Madcap as another one of the voices in Deadpool’s head. Madcap is actually the personification of the fourth-wall-breaking shenanigans Deadpool is famous for, so it would be interesting to see how this could possibly play out on the Big Screen!

The MCU already established Thanos as the big baddie so incredibly well, but what would happen if you threw Death and Deadpool into the picture? In the comics, Thanos does what he does all so he can woo Mistress Death, and since Deadpool can’t die, he also has a complicated relationship with Death. The bizarre love triangle can make for really good entertainment, especially with how “A Kiss, A Curse, A Cure” portrayed it.

In this tale by Joe Kelly and Steve Harris, Deadpool’s backstory gained a little bit more depth, along with the element of unrequited love. Wouldn’t it be cool to see the Mad Titan obsess over something else apart from the destruction of half of the universe? In fact, “Deadpool vs. Thanos” would actually make for a good storyline to adapt too, with Thanos saying, “At this moment no living thing in the universe will die. Not the lowliest bacteria nor grandest Celestial. While stars collapse and implode, blown to dust all that possesses ‘life’ refuses oblivion. All of it lives on despite its destiny, in defiance of the engine of evolution that culls the weak. All of it, Wilson, but you. I am the only reason you live. And because Thanos decrees it, you will die.” The script practically writes itself, doesn’t it?

It’s Wade vs. Bruce! Audiences had such a great time when Thor: Ragnarok pitted the God of Thunder against the Grandmaster’s “Champion”, so why shouldn’t we all have that same rousing good time with “Deadpool vs. The Hulk”? After all, if there’s one thing we’d all love to see from the Disney and Fox merger, it’s our favorite comic book characters duking it out for no apartment reason save for the shock value of it all. So, having the Hulk smash against someone who can’t die? Yes, please!

What are YOUR favorite Deadpool storylines you’d like to see adapted in the theaters? Let us know your thoughts in the comments section below!