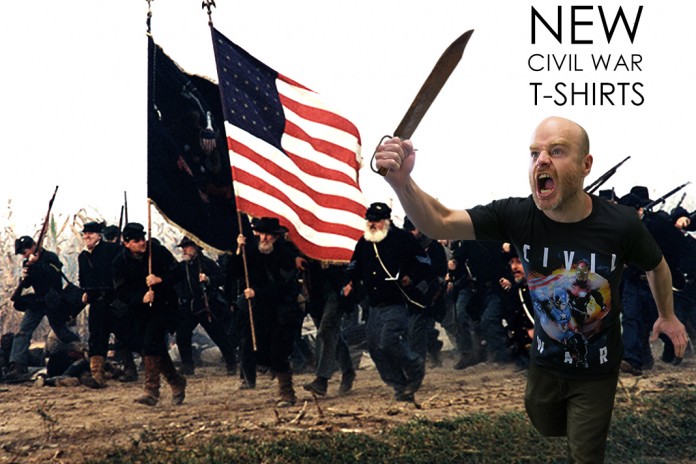 Check out our very first wave of Captain America: Civil War T-Shirts! On May 6th, Captain America’s best friend – the recently resuscitated but still very shell-shocked Bucky Barnes – may have just blown the hell out of things. And, he may have blown the hell out of people residing within these previously mentioned things. So, after all the exploding people and things, Cap and the gang are charged to behave themselves with a booklet of officially penned regulations inhibiting their liberal use of super-powers in the always crisis-laden-theater of planet Earth. Yup. Anyway, check out our very first wave of New Civil War T-Shirts!

It’s the Captain America Civil War Star Symbol T-Shirt! It’s blue! It features a star – Cap’s Star – split into 2 distinct halves, with each segment inhabited by one of 2 prominently featured, conflicting heroes in Captain America: Civil War. So, I guess the left side (our left) represents duty to friends, self-regulation, and a fear/distrust of technology. The right side (our right) represents unchecked egotism, empowering, technological evolution and unexpected dalliances into altruism. Yup.

It’s the Captain America Civil War Flag T-Shirt! It’s black, made from 100% cotton and features a beautiful image of Captain America and Iron Man exploding out of an American flag. Or something. Anyway, it’s liberty vs accountability in Captain America: Civil War.

It’s the Captain America Civil War Logo T-Shirt! It’s black, made from 100% cotton and features, once again, Cap’s segmented star symbol overlaid with the official Civil War logo. Yep, this isn’t just any old star; this is Captain America’s star that may or may not be broken into a “bajillion” pieces after Iron Man throws him into a trailer park located several miles away from the battlefield. Yup.