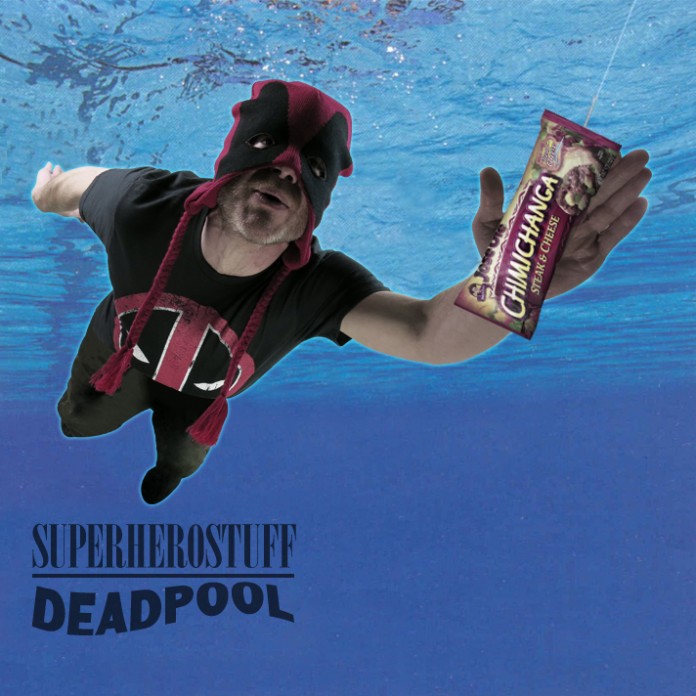 Firstly, I ask that you check out the Deadpool Distressed Symbol T-Shirt. Yes, it’s a black, 100% cotton t-shirt featuring a purposely distressed Deadpool symbol. And yes, it looks as if one wore this while being dragged behind a charging horse. How would I ever come to such a ridiculous conclusion? Well, one may have angered the town’s alcoholic Sheriff, and the Sheriff’s way of dealing with especially annoying, Deadpool T-Shirt-wearing transients is to tie them up to a horse, smack said horse on the beeeeee-hind and watch said transients get dragged across the prairie on their t-shirt-wearing bellies. Yup.

Oh, and check out the Deadpool Mask Laplander Beanie below. Why? Because it’s cold as F##k.

Secondly, take a look at the featured image placed just below the article’s title. Looks kind of like a familiar album cover, doesn’t it? Tell you what; give me the name of the band and the name of the album we’re “borrowing” the cover art from, and I’ll send you…something. To be honest, it’ll probably be a free Deadpool Keychain. Look, it’s free; all you have to do is correctly guess the band name and album, slap your guess into the comments section below, and I’ll send it to you. Deal? What, you never actually made it this far into an article? Well, that’s too bad. Reading the entire article is incredibly important, especially since, on a whim, I could squeeze in a small contest without any implication of it in the first 75 words.