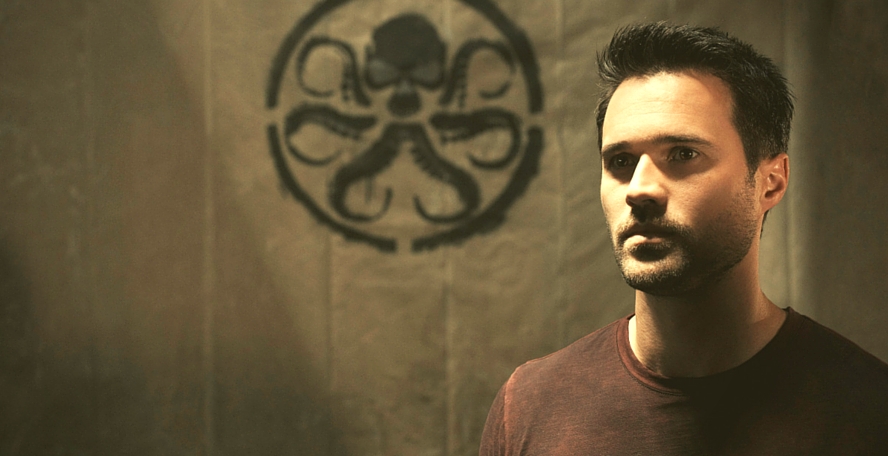 Your favorite employees of the Strategic Homeland Intervention Enforcement and Logistics Division (or just S.H.I.E.L.D.) are set to return. Today, we got confirmation about the fate of a fan favorite: the S.H.I.E.L.D. wunderkind turned HYDRA mole… Grant Ward.

Well just in case you forgot, we last saw Ward left for dead on an alien world after being shot by S.H.I.E.L.D. Director Phil Coulson. He somehow made his way through a portal back to Earth, but clearly lacks the same bright and bubbly personality. Simply put, he looks like death.

Now, his new demeanor makes a lot of sense thanks to a revealing interview from Agents of S.H.I.E.L.D. show-runners Jed Whedon and Maurissa Tancharoen. In speaking with Nerdist, the duo talked about Ward’s fate, now that he is… (ahem… SPOILERS!) … the host for HIVE!!!

“As we saw in the midseason finale episode, Ward is back on Earth.” Whedon and Tancharoen continued, “But he’s definitely not the same Ward who went through the portal to the alien world.”

Now if you’re not familiar with Hive, you’re not alone (I also needed a good refresher on the character). Hive is a genetically manufactured parasite created in a HYDRA laboratory. The parasites combine within a single host and become a sentient monster. Sucks to be Ward right now.

This Hive will be different from his comic book incarnation. As Whedon and Tancharoen put it, Hive “is going to have its own unique twist and be very different from what fans have seen so far. We will see similarities that pay homage to the original character, but fans will see that Hive is taking an exciting new direction.”

Let’s hope that the changes include letting Brett Dalton continue his role as the psychotic Grant Ward, instead of turning him into a mindless zombie. Ever since the Season 1’s covert-HYDRA twist, Ward’s turn as a spy without a home has been one of the best parts of S.H.I.E.L.D. His character’s tortured past combined with his sadistic mentality (oh dear lord that Mockingbird torture scene) have made him one of the most menacing figures in the entire MCU. Sure, let him be taken over by GMO-parasites, but don’t let that stop Grant Ward from being the great villain he has become over the last 3 seasons.

MARVEL’s Agents of S.H.I.E.L.D. returns for its midseason premier March 8th at 9pm on ABC.