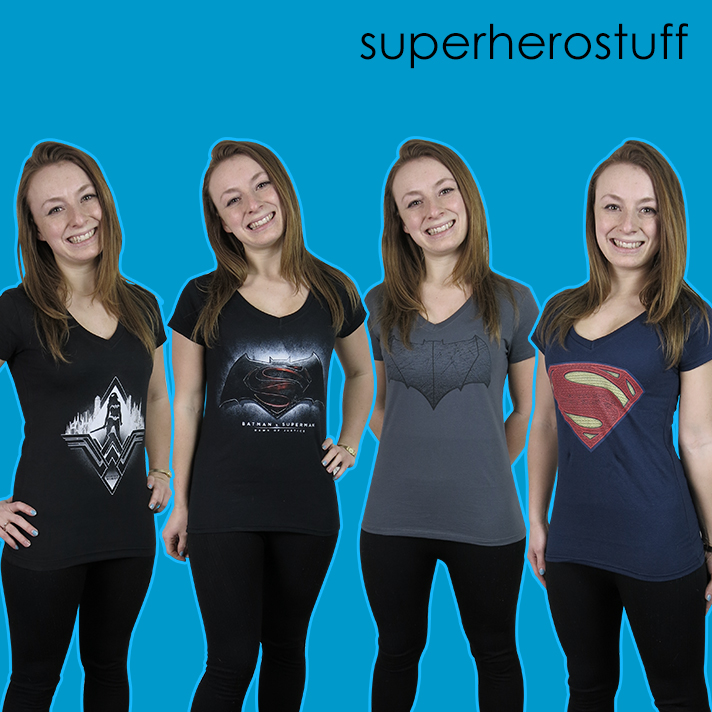 Yes! Check out our selection of these New Batman V Superman T-Shirts for women! Firstly, check out the featured image above. Does it look a little…familiar? Like it might be based on…an album cover??? Tell you what; let me know the name of the band, as well as the album, and I’ll throw you a free keychain. Here’s a hint: One of the song titles rhymes with “Muddy Collie.” First 5 people to guess correctly win themselves a free keychain. Now, on to these AWESOME Batman V Superman T-Shirts for women!

FROM LEFT TO RIGHT!

It’s the Batman Vs Superman Wonder Woman Warrior Women’s V-Neck T-Shirt! It’s black, made from 100% cotton, and features and AMAZING IMAGE of Wonder Woman cast as a captivating silhouette against…Themyscira? Metropolis? Not really sure where she’s standing. Anyway, it’s Wonder Woman striking her very familiar movie pose, standing upon a pocket of space nestled between her movie-specific symbol and…a diamond.

It’s the Batman Vs Superman Symbol Women’s V-Neck T-Shirt! It’s black, made from 100% cotton, and features an image of the melded, molded, conjoined Batman and Superman symbols that are uncharacteristically tolerant of each other! Yes, it’s the official Batman V Superman symbol, and it pretty much portends the titular characters’ eventual cooperation. How? Because, if the symbols can do it, I’m sure the heroes will eventually follow suit.

It’s the Batman Vs Superman Batman Symbol Women’s V-Neck T-Shirt! Made from 100% cotton, this dark-gray, v-neck t-shirt for women features Batman’s mildly-bloated, movie-specific Bat Symbol! Yes, now YOU can feel empowered to contest the local criminal element due to extreme childhood trauma! And when I say “contest,” I really mean taking your symbol-shaped, super-sharp throwing-things and carving the hell out of poor-smelling people and terribly fashionable, knitted sweater-wearing coffee-shop transients!

It’s the Batman Vs Superman Women’s Superman Symbol V-Neck T-Shirt! This blue, v-neck t-shirt for women features Superman’s movie-specific symbol! Oh, and it’s not actually an “S” for Superman; it’s actually the Kryptonian symbol for ‘hope.” See? Superman is NOT the terrible engine of destruction our government (and Batman) believes him to be. Nope; Superman is here to HELP! Did he just walk out of that crater where Metropolis used to be? Yes. Did he, uh…just throw that very militant alien into a bus station which pretty much killed like, 3000 people? Well, yeah, but…LOOK! IT WAS HIS FIRST F###ING WEEK ON THE JOB, OKAY!!??? BEING DEALT A FULL-SCALE ALIEN INVASION 25 MINUTES AFTER LEARNING TO FLY IS IN NO WAY A FAIR SET OF CIRCUMSTANCES!! SHUT THE F##K UP, MAN OF STEEL HATERS!! Ahem.

Check out our full line of Batman V Superman merchandise!