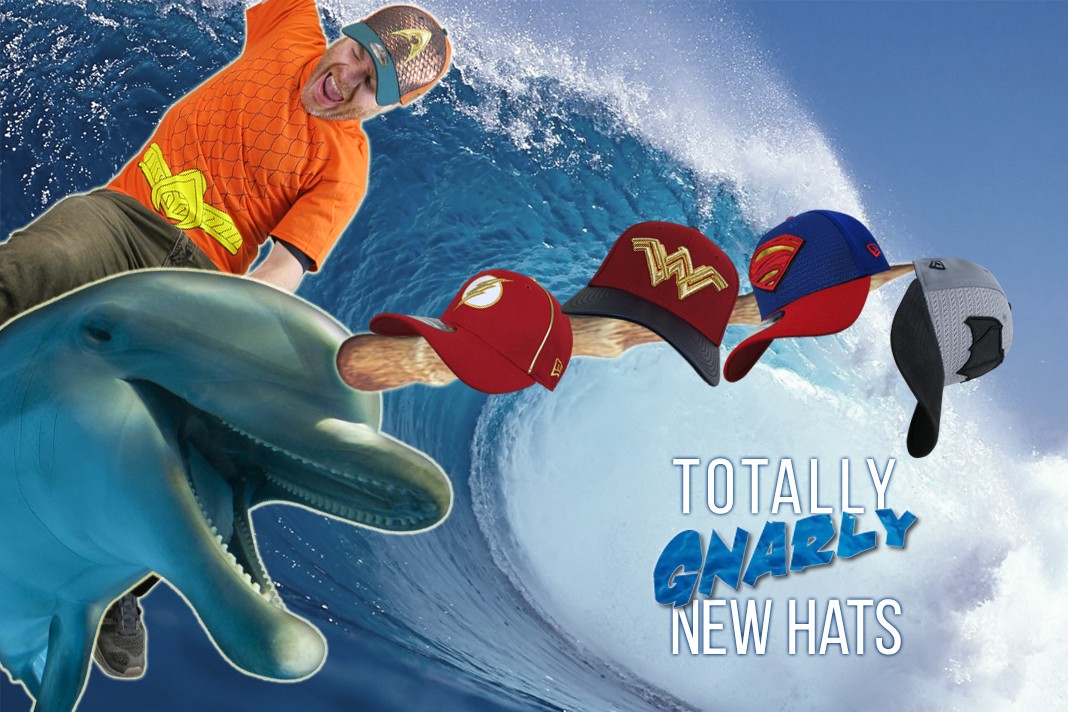 It’s the Batman Vs Superman Aquaman Symbol New Era 3930 Hat! Made from 95% cotton and 5% spandex (with a 100% polyurethane front), this sized Aquaman hat features a raised Aquaman symbol set against diffused, glistening, faux-seashell scaling! Now, turn it around and check out the yellow, raised Aquaman logo! NEAT! OH! I completely failed to mention that his Aquaman hat is a Superherostuff.com exclusive!

It’s the Batman Vs Superman Aquaman Symbol 5950 Hat! Coming in multiple sizes to fit multiple, misshapen heads, this flat-billed Aquaman hat features the same raised, embroidered Aquaman symbol layering a muted, orange, glistening faux-scale mail armor. And yes, you can turn it around to reveal that yellow Aquaman logo. Now, flip it over and check out the multiple, illustrated images of Aquaman in aqua-action! Oh, and his is also…EXCLUSIVE!

It’s the Batman Vs Superman Superman Symbol 3930 Hat! Made from 95% polyester and 5% spandex, this sized Superman hat features Superman’s raised, embroidered, shiny and movie-specific Superman symbol layered over that uniquely patterned, Kryptonian weave resembling Superman’s costume. And just to be clear; it’s not actually made from alien materials. Nope. Everything necessary for the manufacturing of this particular Superman symbol hat was found, raised, grown and artificially disseminated from soft plastics here on planet Earth. YES! Oh, and this Superman hat is ALSO A SUPERHEROSTUFF.COM EXCLUSIVE!

It’s the Batman Vs Superman Bat Symbol New Era 3930 Hat! I know this is a little early, but there’s something I need to mention to you: IT’S A SUPERHEROSTUFF.COM EXCLUSIVE! Anyway, this sized Batman Hat – made from 95% polyester and 5% spandex – features Batman’s broad, embroidered Bat-Symbol layered over patterned material reflecting the specific, woven make-up of Batman’s movie costume! YES! And turn it around to check out a tinnier but-no-less-intimidating Bat-Symbol! YES!

It’s the Batman Vs Superman Wonder Woman Symbol 3930 Hat! Made from 95% polyester and 5% spandex, this sized hat features Wonder Woman’s raised, movie-specific symbol layered over a deep, maroon-like red! Now, turn it around and check out a smaller, but no-less-divine Wonder Woman symbol. NEAT!!

It’s the Flash Sublimated Lightning Symbol 5950 Hat! This EXCLUSIVE, flat-billed Flash hat features a raised, embroidered Flash Symbol and streaks of printed lighting wrapping around the hat’s entirety. Turn it around to reveal the classic Flash logo! Now, flip it upside down and prepare to BE AMAZED! It’s a gaggle of repeated, illustrated Flashes vibrating about and circling the hat’s insides at tremendous, incalculable speeds! NEAT!

It’s the Batman Vs Superman All Over Character 5950 Hat! This flat-billed, sized, 100% polyester flat-billed hat features a 50% split between Batman and Superman imagery. The right side of the hat features images of an armored Batman, and the left side features images of Metropolis’ favorite son, Superman! In the hat’s frontal facade, the two heroes meet and the super-pummeling grudge match begins! Oh! And be sure to turn it upside down to witness Batman and Superman brow-beating the f##k out of each other. Yup.

It’s the Flash Symbol Armor New Era 3930 Hat! Made from 95% polyester 5% spandex, this Flash hat features a curved bill, a raised and embroidered Flash symbol and strikingly minimal, exquisitely tasteful golden trim on either side of the cap. Now, turn it around and check out the classic Flash logo! NEAT!