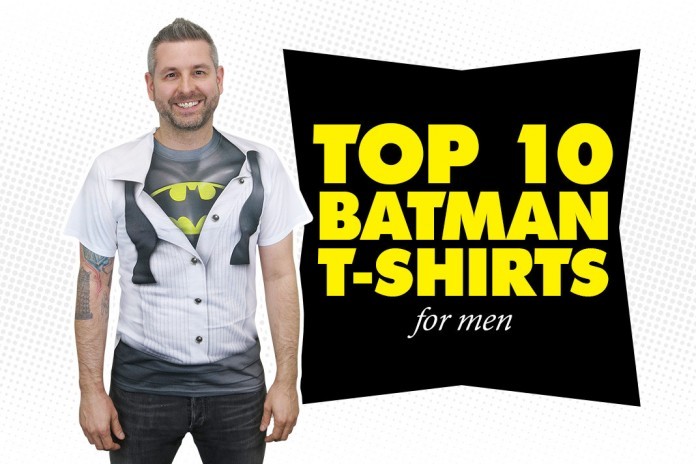 We here at SuperheroStuff love our company and a bunch of our favorite (and best selling) t-shirts happen to be ones inspired by DC Comics’ Caped Crusader! Below, you’ll find our top 10 bestselling Batman t-shirts hand selected by a fancy-pants algorithm. Come to think of it, that’s probably how Skynet got started! So, starting with our #1 best- seller:

1. Our first pick and bestselling tee is the patented Batman Symbol IV T-Shirt. Sure, it isn’t a very imaginative title, but you know what? It’s based on that super popular story line involving Hush (or Clayface), Catwoman, and some car batteries! That isn’t as dirty as it sounds, by the way.

2. Our 2nd pick is one that you have probably seen around the world yet you never had a chance to get one (or perhaps you do and this doesn’t apply to you). It is your standard issue black t-shirt with standard issue black and yellow Batman symbol made popular in the 1980s via the majesty of Michael Keaton.

3. Our next pick is the super cool Batman Beyond T-Shirt. You’ve seen the show, right? It is based on the next Batman, Terry McGinnis, receiving a powered suit and training from the legendary Batman, Bruce Wayne! It’s worth watching if only to see a crotchety old Bruce Wayne. Whomp!

4. This next shirt is basically like our standard issue black and yellow Batman shirt…except this one is purposely worn! You can tell people that your ancestors wore it as they headed west in covered wagons and Louis and Clark were super impressed. Yeah, for history! Or, you could tell them you went crime fighting with Batman, and your duty was to remain at Batman’s side for every skirmish, always prepared to perform the ‘Human Shield Maneuver.’ Look, it’s like he told you: This all part of the training.

6. It isn’t quite Batman, but our sixth choice is close enough! This shirt hosts the Red Hood Symbol, which is normally worn by Jason Todd. Jason Todd was the 2nd Robin and had some issues…just ask the Arkham Knight!  In Jason Todd’s free time, he worships at the altar of Superboy Prime, giving thanks for the sound beating Superboy unleashed upon Multiversal scaffolding, facilitating the nearly nonsensical resurrection of the newly minted Red Hood!

7. Batman sometimes has the night off. When that happens, the Gotham City Police Department has to step up! They have the tools necessary to defeat Mr. Freeze, Solomon Grundy, and Darkseid…right? Hit ’em with the pepper spray!  As an interesting aside, the Gotham Precinct has a very rigid, mandatory, psychological evaluation policy. Each officer is expected to speak with a counselor specializing in abnormal criminal interactions at least three times a month. What’s an ‘abnormal criminal interaction?’ It’s when Harley Quinn bites off your partner’s ear, or Killer Croc uses your collarbone to carve the words, ‘Property of Croc’ on your…uh…behind parts. Yep, Gotham Officers take their coffee with 5 sugars and a spoonful of PTSD.

8. You take one part Batman symbol and one part Gothic family crest and SHAAAZAM! No, not the wizard…this great t-shirt! My guess is that the Knights of the Round Table probably wore this thing but then again, we should probably check with Jason Blood.

9. During World War II, the British figured out that you can just tell people to ‘Keep Calm,’ and you know what? They will! This shirt takes that popular propaganda phrase and mixes it with the Caped Crusader. For you, this phrase carries a much darker significance; it brings back the hazardous memories of Batman’s ridiculous training expectations. Heck, he was always telling you to, “Keep the @#$ calm,” about something, right?  “Keep calm and take the punch! Keep calm and block the knife with your forehead! Keep calm and let Alfred reset your spine! Keep calm and let Alfred replace the eye that was eaten with this small-scale, Brother Eye Ocular Enhancement Module (B.E.O.E.M.), fresh from WayneTech’s secret science basement!” Ugh, Batman is unbelievably hard to please, and when he tries to make amends, he really overcompensates.

10. Our tenth and final selection is definitely the most interesting of the bunch; it’s the infamous Bat-Cat shirt! Hey, the internet loves cats….and the internet loves Batman. I’m surprised this awesome shirt didn’t pop up earlier! I wonder how Selina Kyle feels about this. And we also have to wonder: As a kitten, did this cat witness the brutal death of his cat-parents, scratched to death right in front of his eyes by some cat-mugger during a family outing to the latest Cat-Zorro picture show?? And did this kitten, stricken by the loss and grief of such a cat-tastrophe (sorry about that), pledge his mind, body and soul to the protection of all innocent cats, so that nary a cat would have to experience the aching void suffered hourly by a costumed feline reliving the bloody upheaval of his kittenhood?? Oh, Bat-Cat…who will save YOU??

Well, there you have it! Our top 10 most popular Batman shirts. We hope that you’ve enjoyed this little list and there is plenty more over at SuperheroStuff.com!