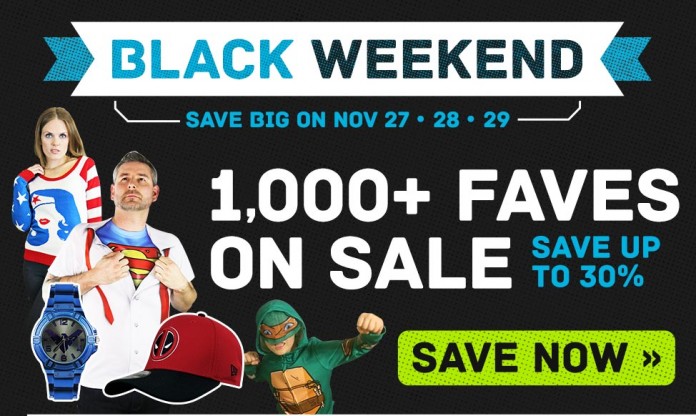 Superherostuff.com is extending Black Friday sales for an additional 2 days, making it, officially, the Black Weekend Sale! That’s right, November 27th, which you’re already familiar with, is joined by November 28th and 29th for a whopping 2 days of additional sales and special offers! I mean, have you seen some of these prices!!?? No? Then let me show you a small sampling of some of our best selling items cut down to unreasonably low (and panic inducing) prices!

The Batman Gray Union Suit Pajamas w/Cape and Cowl is made from 100% polyester, featuring a removable cape, booties for your footsies, openings for your digits and a hooded cowl resembling the headpiece of everyone’s favorite, dependably terse vigilante of the night, Batman!

The Punisher Movie Skull T-Shirt is a black, 100% cotton t-shirt featuring the Punisher skull design prevalent in the 2004 Punisher movie starring Thomas Jane. Yes, about 14% of that move was actually watchable, but we got a decent Punisher symbol out of it.

The Women’s Batman Symbol T-Shirt is a black, 100% cotton shirt available in juniors and women’s sides, featuring the bold Batman symbol! Batman is cool and stuff, right? I mean, the guy’s obsessed with keeping us safe 24/7, which explains the short fuse and the perpetual scruff. Let’s show just a modicum of appreciation and wear the darn t-shirt once and a while. Seriously, it might prevent you from getting caught up in friendly fire, so to speak. There’s a sleep deprived PTSD sufferer patrolling the city streets with razor sharp Batarangs. Adorning yourself in his symbol might prevent him from making an egregious error in judgement.

The Wonder Woman Blue and Purple Women’s Socks are made from 68% acrylic, 30% polyester and 2% spandex. Or..a 100% Themiscyran/ Olympian weave hand-dipped in the tears of a Minotaur…or something. Anyway, these Wonder Woman socks grant one the speed of Hermes, the sizzling glow of Zeus’ lightning bolt, the intoxicating beauty of Aphrodite and…okay, I’ll stop now. Anyway, they’re great socks for the Wonder Woman fan currently agreeing to date you who, unfortunately, isn’t humble at all about beating you in arm wrestling.

Click HERE to view our complete selection of reduced items offered during our weekend long sale!

Thanks for shopping, for reading, and for not throwing rocks. Seriously, thanks for that show of restraint.