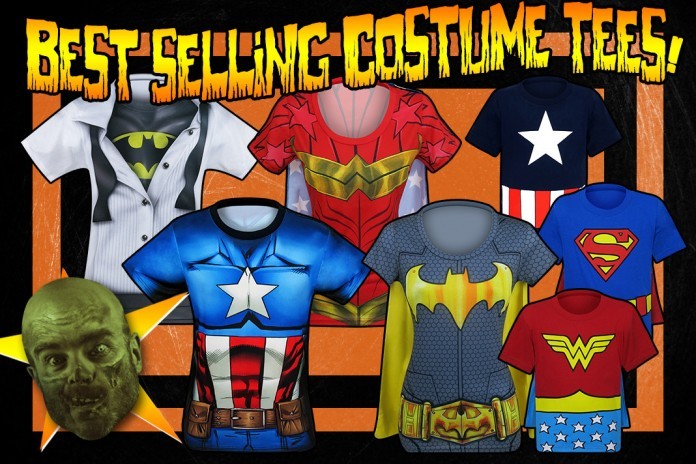 That’s right, kids. It’s time to dress up like your favorite Superhero and demand hard currency in the form of solid blocks of chocolate. If your demands for said chocolate aren’t met, you absolutely have the right to toilet paper a home adorned in one of our awesome costume t-shirts! You also have the right to petition for larger blocks of said chocolate if your demands are only partially met. Snack-size? Seriously? If the chocolate bar is smaller than your calf muscle, there’s room to negotiate. To do this effectively, we suggest you adorn our Captain America Sublimated Costume T-Shirt. But I digress. Anyway, check out some of our best-selling (and best looking) costume t-shirts for men, women and kids!

The Batman Tuxedo Costume Reveal Sublimated T-Shirt and the Superman Red Tie Costume Reveal T-Shirt, both made from 100% polyester, are incredibly beautiful t-shirts reproducing the costumed appearances of DC Comics’ collaborative (and sometimes contentious) icons, Batman and Superman! Well, okay, not the full costumes, but hints of costumes hidden underneath carefully chosen t-shirts worn only to perpetuate and solidify secret identities!

The Batgirl Suit Up Women’s Costume T-Shirt is made from 100% polyester, mimicking Batgirl’s lightly armored, costumed top, complete with excellently illustrated Utility Belt! But wait, there’s greatness beyond the exquisite sublimated printing! What form does this greatness take? Why, the form of…a removable cape! YAHTZEE!

The Robin Sublimated Caped Women’s T-Shirt, also made from 100% polyester, closely resembles the costume adorned by one or several “Boy Wonders” brave enough to invite the grisly training techniques of the impossible-to-please Dark Knight. I mean, I was absolutely appalled after reading Dick Grayon’s best-selling autobiography, How the Batman F@!!$# up My Life Completely. That second chapter, “Robin and the Bear?” Absolutely horrifying. If you haven’t read it, this chapter recounts a seven month period during which Dick Grayson was purposely left alone in a bear cave; all he had was a yo-yo, three thumbtacks and a kaleidoscope. After seventeen weeks, Robin was subsisting on a diet of uncleaned fish, grubs and mushrooms (some hallucinogenic, so he had to lose the kaleidoscope), speaking fluent bear-speak and torturing poachers with a yo-yo and three thumbtacks. Oh, sorry; this costumed t-shirt also features a removable cape!

The Batman Kids Costume Caped T-Shirt with removable cape is made from 100% cotton, the perfect little faux Batman uniform to wrap around any aspiring crime fighter. Is your wee one obsessed with solving the murder of his favorite stuffed animal? Do you find him reading books, exercising rigorously or insisting you and the Penguin had a hand in the “accidental” death of Diperee-Doo the talking Unicorn? Yes? Hmmm. Maybe you should skip the Batman tee since enabling this behavior might be a bad idea.

The Superman Kids Costume Caped T-Shirt with removable cape, also made from 100% cotton, is for the child who likes…Superman; the child who enjoys making his bed, chewing with his mouth closed and eating with utensils. If your toddler displays these characteristics, we recommend you hide him from the government and raise him as your own. Humanity might not take kindly to rattle-shaking, sun-powered visitors from outer space.

The Captain America Kids Logo Costume T-Shirt is made from 100% cotton, colored in the familiar red, white and blue of America’s premier super solider! This Captain America t-shirt is available in toddler, juvenile and youth sizes, so you can adorn a multitude of growing man-children simultaneously! Has your child awakened to a time he’s no longer familiar with, lamenting the passing of old friends while listening intently to Tommy Dorsey records? If you’re about to answer, “Yes,” through trembling, tear-soaked lips, then by all means, buy this t-shirt.

The Wonder Woman Kids Costume T-Shirt, slightly more star-spangled than the Cap t-shirt, is made from 100% cotton and features, for your convenience, a removable cape! Because yes, when formality is demanded, Wonder Woman adorns a cape! I mean, she’s Wonder Woman. She’s like, royalty, godliness and the shining avatar of hope and healing rolled into perfect physical form. Honestly, the lasso (as well as the sword and shield) is always a last resort. She’ll take your word for it, and trust you to do the right thing. Of course, she’ll throw you the length of a football field if you disappoint, so…yeah, it’s healthier to play it straight with Wonder Woman.

For our complete selection of costume apparel, I dare you to click here!

So, are you ready for Halloween? Really? Okay, who (or what) will you be dressing up as? Wonder Woman? Batman? Captain America? Wait…what? A Meineke employee? Hmmm. I have a feeling you’ll be getting a lot of raisins this year. Maybe a few bottles of room temperature water.