Director Matt Reeves revealed the first trailer for The Batman at DC Fandome this weekend, and even though the film is only about 25% done shooting, the clips from the trailer look pretty darn good. And because we’re just so incredibly hyped for this particular film, we’ve broken down some of the coolest little tidbits you might have missed from the trailer right here!

The trailer pretty much makes it obvious that it’s The Riddler’s time to shine this time around, with all those riddles he makes in the voice over (played by Paul Dano). There seems to be some kind of violent protest he’s making against the reelection of Gotham Mayor Don Mitchell Jr., and he’s got a personal vendetta about lying. There’s a scene in the trailer where he leaves an owl-themed card for Batman to find (Court of Owls involvement, maybe?), with a message written in code. Thanks to the magic of the Internet, fans have decoded this message to answer the riddle of “What does a liar do when he’s dead?” as “He lies still.” Pretty classic Nigma riddle, and very, very cool.

2. Gordon and the GCPD

We get a shot of Jeffrey Wright as James Gordon checking out a crime scene with Robert Pattinson’s Batman right there with him, so this hints at a cooperative relationship between the two as always. Later on in the trailer though, we see Batman getting into a scuffle with members of the police, so it’s still not clear as to whether or not Bats’ relationship with the GCPD is antagonistic.

3. The man who may or may not be Penguin

Rumors have been speculating that Colin Farrell will be playing The Penguin in the film, so what are the odds that some beefy guy with a long Penguin-like nose is shown glaring menacingly in the trailer? It does look like Farrell upon closer inspection, but the prosthetic makeup is so incredibly well done that it’s still pretty hard to tell if it’s really him under all that gunk. 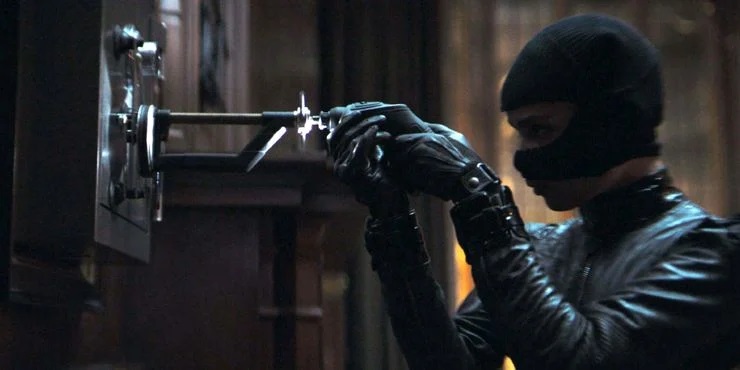 In one scene, there’s a newspaper clipping framed on the wall with a headline that says, “Maroni Drug Bust”. In the comics, Maroni was responsible for turning Harvey Dent a.k.a. Two-Face’s face the way it is, so it could be a hint to Gotham’s favorite District Attorney. We also get clear images of Zoë Kravitz as Selina Kyle in headgear with catlike ears, so that’s two of the Batman lore’s sometimes-ally-sometimes-foe characters we’re eager to see. 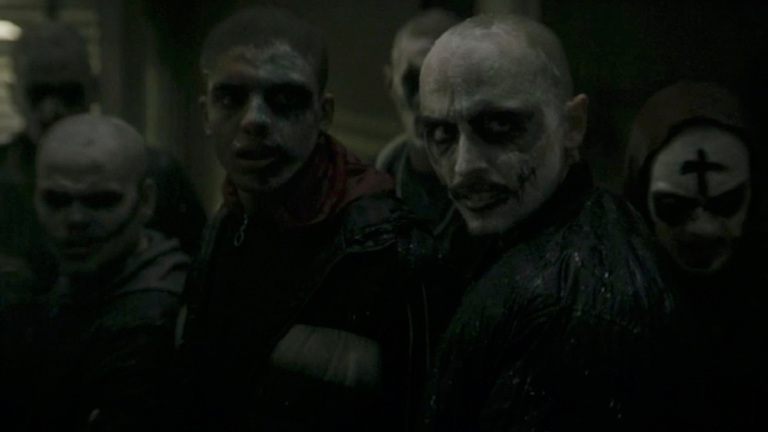 When Batman is roaming the streets trying to strike fear into the hearts of the cowardly and superstitious lot of Gotham City, we see a bunch of thugs with clown makeup on their faces. It’s a little odd for this to be related to the Joker in any way, but I’m reminded of those thugs from Frank Miller’s The Dark Knight Returns (the Mutants), who were basically just a bunch of lawless kids roaming the streets looking for the next big “leader” to support. Is it possible that, like in the comics, these thugs will see Batman’s brand of vigilante justice and end up being his followers? That would be a really interesting angle to explore, in my opinion.

All in all, the first trailer for The Batman looks hella cool, and it’s shaping up to be a totally awesome movie. Robert Pattinson under the cowl also looks totally badass, and the way he beat up those bad guys in one particular scene just proves how menacing he can be, especially since this film will essentially be the Caped Crusader’s so-called “Year Two”. Are you as hyped up as we are? Sound off in the comments below!