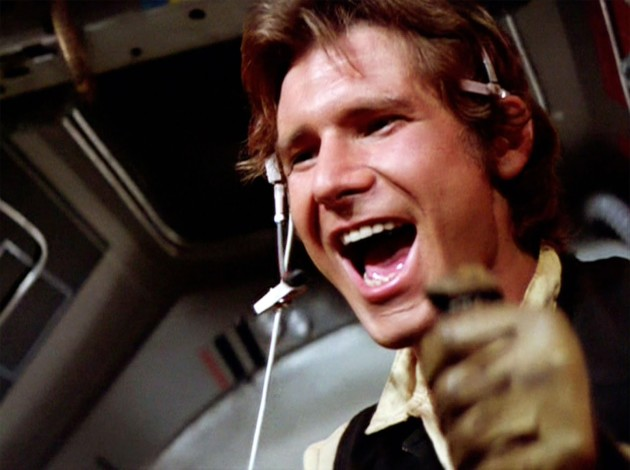 All right, ladies and gentleman, we’ve almost made it. Only 3 more days until Star Wars: The Force Awakens hits theaters in the US! Since we’re all amped-up to return to ‘A Galaxy Far, Far Away’ this Friday, I thought it would be a good idea for me to list 5 reasons why I’m excited to see this franchise return to the big screen.

I was born in the 90’s so i never got to experience going to the theater to see any of the Original Trilogy movies when they came out. Heck, I didn’t even see the prequels in theaters. In order for me to get a sense of the Star Wars theatrical experience, I had to find someone who actually went to see it. I remember stories that my family members would tell me about going to the theater to see the original Star Wars, and how everyone was awestruck by what they witnessed. I was disappointed that I would never get to experience that sense of amazement and wonder conveyed by Star Wars in an actual movie theater. Now that The Force Awakens is coming, I finally have my chance to truly experience Star Wars.

When The Force Awakens was announced a few years back, myself and millions of fans were asking ourselves the same question: “Is the original cast coming back?” They are some of the most iconic and beloved characters in all of cinema, and to have them back, continuing their journeys that began in the original films, is so exciting. Especially for someone like me who never got to experience these icons on the big screen. As for Luke and his noticeable absence? How about we just find out when we watch the movie. Where’s the fun in knowing all the secrets a film has BEFORE it comes out? It ruins the experience.

Good ole Kylo Ren. What I love about him already is that we don’t know much about his character, his lineage, or why he’s doing what he’s doing. The sense of mystery surrounding him is beyond refreshing, especially in the age of social media where EVERYTHING gets spoiled or leaked. Then there’s the mystery of Kylo’s master, Supereme Leader Snoke. We know absolutely nothing about him aside from the fact that Andy Serkis is doing motion capture for him and he’s absolutely fantastic. I like not knowing my bad guys until I watch the film. All we know about Kylo is that he is a Knight of Ren, has Darth Vader’s mask, and made his own lightsaber. If they revealed more, I don’t know about any of it for obvious reasons stated above.

I don’t know much about these two, but from what I’ve seen, both of these characters share a few of Luke Skywalker’s historic characteristics. Most of the Rey footage we’ve seen shows her on a desert planet scavenging, much like Luke in A New Hope. Finn on the other hand knows he meant for greater things than what he’s currently doing, which almost directly mirrors Luke from A New Hope. Of course this was intentional, and I can’t wait to see where the story takes them.

1. The Future of Star Wars

This is something that I keep forgetting: The Force Awakens isn’t a just story that will begin and end in a 2 hour time span. Nope. With 2 more films coming from this new trilogy, spin-off films focusing on Rouge One, Han Solo, Boba Fett, and possibly more, you can guarantee we’ll be seeing a LOT of Star Wars in the next 6 years or so.

Again, I’m so happy Star Wars is back. For years I wondered how they could continue the story after Return of the Jedi, and how they could bring back the original cast. Thankfully, The Force Awakens is doing just that. Thank you, J. J. Abrams. Thank you.

Travel to a Galaxy Far, Far Away when Star Wars: The Force Awakens blasts its way into theaters December 18, 2015.