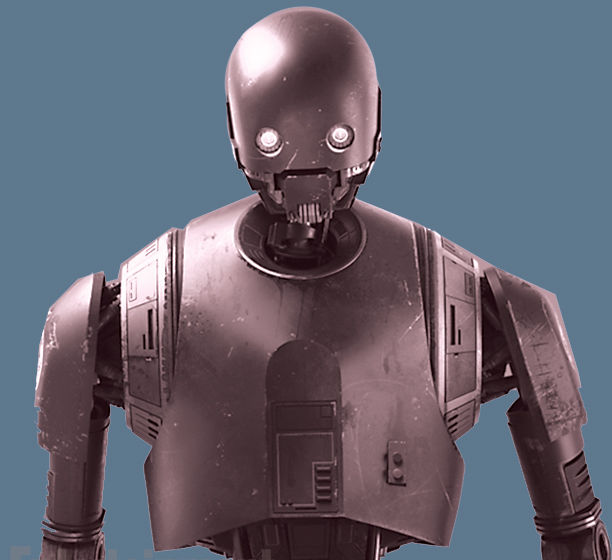 When Rogue One: A Star Wars Story hit theaters this December, there is going to be a plethora of new faces that fans can gush over. One of those new characters, sure to become a new fan favorite, is the newest droid of the Rebel Alliance… K-2SO (or simply Kaytoo).

Kaytoo was brought to life through motion capture by the delightful Alan Tudyk (Firefly, Dodgeball). Former property of The Empire, K-2SO was captured and reprogrammed by Cassian Andor (played by Diego Luna). Sitting down with Entertainment Weekly, Tudyk talked about the droid’s time prior to joining the Rebellion.

“He was a security droid in the Empire and they sort of enforce whatever needs to be enforced. They are imposing. He’s 7-foot-1, and follows orders pretty well. If you’re asked to be detained, he can detain you. They stand guard, and if somebody doesn’t mind them, they’ll… They’ll enforce the sh– out of [people.]“

Tudyk mentioned how multiple security droids will show up throughout the movie, but there’s only one Kaytoo. He could possibly be described as a robotic Chewbacca… expect for the fact that he doesn’t speak Wookie. Instead, this is a droid that speaks his mind.

“He has no filter. There was an old line, it’s not in there anymore…. I can’t say what I want to say, but Kaytoo can say what he wants. He can say insulting things very casually if he thinks they’re true. He’s not an overly emotional guy. He’s not like C-3PO, who’s like a f—ing neurotic mess. He’s flappable. Kaytoo is much more in the unflappable category.”

We’ve seen droids with attitude’s before. R2-D2 also had a little spark in him… same with BB-8. I mean, even Chopper of Star Wars Rebels shows a little sass here and there. The only problem is, we can’t really understand them. Now, for the first time, we’re getting a droid that doesn’t follow protocol… and instead wears a rugged microchip on his sleeve.

Still, don’t expect Kaytoo to be a rough enforcer for the Rogue One crew. It turns out, he has a rather soft spot for Captain Andor; the Rebel officer was the one responsible for freeing the droid from his Empire programming. The two have created a bond between man and machine very reminiscent of Luke and R2-D2.

“They’ve been around. They’ve been together for a while, a couple years. He wants what Cassian wants. He loves Cassian, because he freed him. It’s also more paternal in that [Cassian] gave him life and took away the bonds of his programming.”

So, now that we know where he comes from, it’s time to answer the big question: how did Tudyk come up with the voice for Kaytoo. Tudyk’s an accomplished voice actor, having worked on movies like Frozen, Wreck-It Ralph and Big Hero 6. Heck, Tudyk was even the actor behind the role of Sonny from I, Robot. Always aware that the voice is as important as the character’s appearance, Tudyk made sure his K-2SO sounded perfect.

“I have an English accent,” (well… Tudyk was actually born in Texas) “I feel like a lot of the Imperial characters are English, and the Rebels tended to be like Han Solo, you think of the Americans. And because he was a droid, it made sense that it would be more of a proper accent.”

Tudyk and his droid counterpart K-2SO will make their Star Wars debut when Rogue One: A Star Wars Story hits theaters on December 16th.