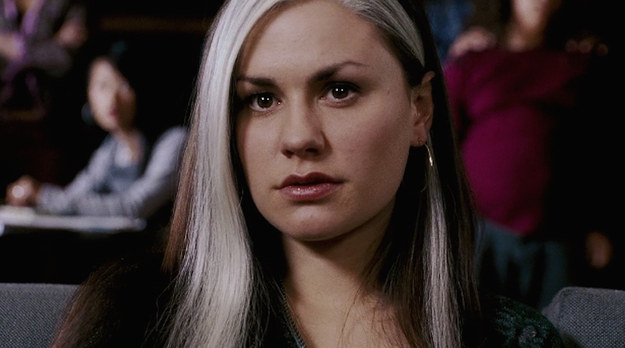 While out making the rounds promoting The Good Dinosaur, star Anna Paquin was invariably asked a few questions regarding her role as X-Men’s darling southern belle, Rogue! When asked what it was like to be on the X-Men films and if she would ever return, Paquin answered, “I have had a great time on all of those films that I’ve been part of. Those are people that are very dear to me. If it happens that that’s something that makes sense for whichever of the 700 different X-Men projects that are happening which I personally can’t keep track of then that’s great. If not, they’re still fun to watch.”

Would she have any stipulations about returning to the role…like perhaps being in the actual theatrical cut (I’m looking at you, Days of Futures Past)? “Look, I’ve always said that. I’ve been saying that since they cast me when I was 16 — like, ‘Do I get to fly?’ I made some flippant remark on Twitter about if I get to fly that was like breaking news. I’m like, OK, oh for god’s sake. Humor doesn’t translate that well in written word.” Paquin explained in more detail, “I would come back and do whatever. These are people I’ve known for half my life. I have a lot of love for my X-Men family. I realistically wouldn’t really care what it was if they were getting the whole gang back together kind of thing. On a side note personally, I would really like to fly because flying’s cool.”