Doctor Strange is nearly here. On November 4th, the Marvel Cinematic Universe will open like a split grapefruit and reveal realms only imagined and oft-times feared when Doctor Stephen Strange (Benedict Cumberbatch) accepts the mantle of Sorcerer Supreme and magics the hell out of any and all dimensional parasites and otherworldly interlopers. To properly celebrate his big screen, live-action arrival, you should adorn yourself (or arm yourself) with a few selections from our mystically beguiling line of Doctor Strange merchandise. OBSERVE!

This 100% wool (MAGIC WOOL, mind you), flat-billed and sized hat features the raised, embroidered and protective Seal of Vishanti! Turn this hat around and bask in the embroidered Doctor Strange logo! This is probably the most important bit of protection we can give you, considering it guards against the constant psionic barrage employed by immortal, Chthonic deities in an effort to massacre YOUR MIND!

Made from 100% cotton, this black t-shirt features a flattering image of our famed, renowned, respected and resplendently robed Sorcerer Supreme! Stare in awe as your master weaves high-level spells in front of the Seal of Vishanti residing in the Window of Worlds. And the photographer? He really captured the strength, the intelligence, and the fortitude of our overly gracious master of all things magic-ish. This is your master, and you will wear his visage with PRIDE! 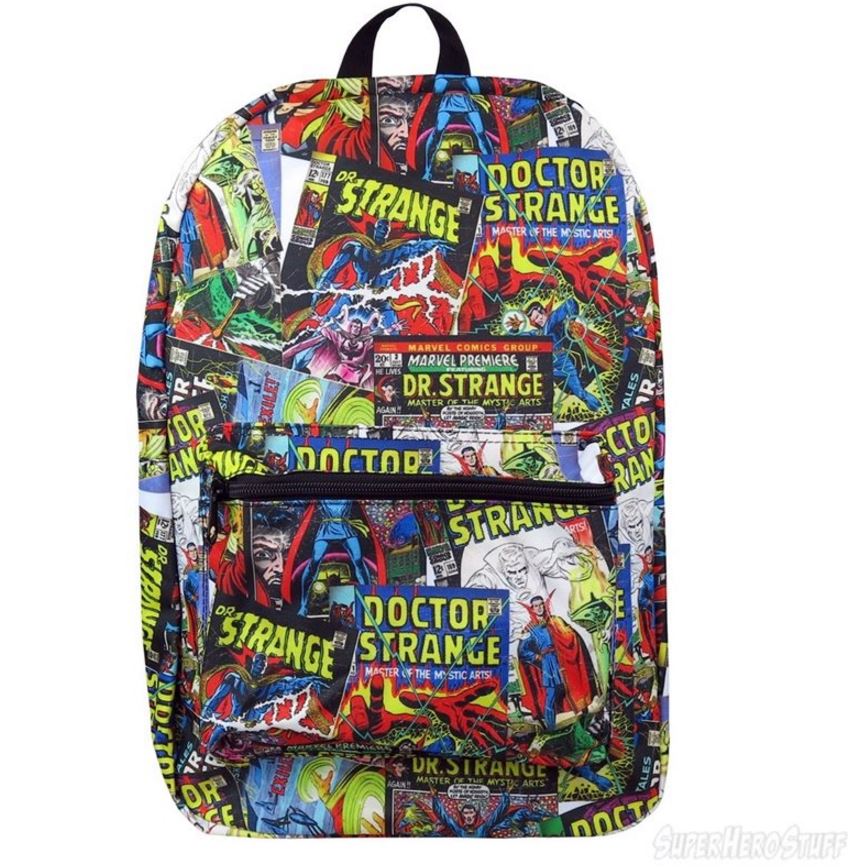 Consider this your magical Bag of Holding! While the good doctor takes you on a tour of dimensions rife with unicorns, rainbow-colored ponies, and murderous, demon-worshiping variations of your friends and family, be sure to place the more unique items procured during your trip in this high-quality backpack slathered with the classic, printed adventures of our immaculate Sorcerer Supreme.

Made from 100% wool (yes, MAGIC WOOL!), this sized, flat-billed cap features the raised and embroidered Eye of Agamotto layered over a blue, shiny, felt-like body. The top of the bill reflects the appearance of Strange’s sacred Cloak of Levitation, meaning spontaneous floating is a genuine concern while wearing this hat during, well, whatever you’re doing while wearing this hat. Basically, we’re telling you to wear it indoors, and specifically in rooms with very low ceilings.

Measuring 67” by 45”, this cardboard stand-up is rendered in the likeness of our glorious master of the mystic arts, Doctor Strange! Its purpose? To be left in place of the good doctor when his journeys into realms corrupting logical thought are far more extensive than originally planned. You see, Wong becomes very concerned if Doctor Strange is gone from the Sanctum Sanctorum for periods of time considered “irregular.” Unfortunately, the surprisingly excitable Wong considers 17-minutes irregular, which explains his incurable stomach ulcers and his constantly spasming left eye. So, to mitigate Wong’s nearly debilitating concern, the Doctor leaves his cardboard likeness in the darkest study. When Wong asks Stephen Strange if he would prefer a sandwich sans crust and receives no response, well, that’s pretty much the normal level of discourse, so…consider Wong appeased.