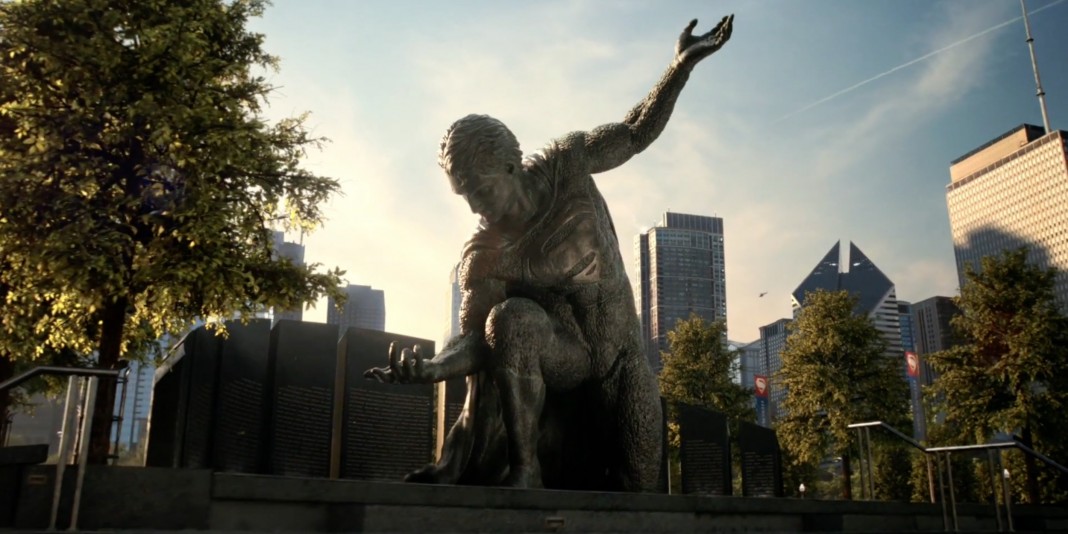 The whole world is currently going crazy about the epic-ness that is Batman V Superman, and reviews are as varied as a family-sized bag of trail mix. But whether you’re dying in ‘nerd-gasmic’ ecstasy or flipping tables and rage-quitting on DC movies forever, you’re no doubt still curious as hell about all the Batman V Superman Easter eggs, fan theories, and things you might have missed from the film. So, without further ado, here’s a quick list of geeky goodies that’ll involve you in a different kind of egg-hunt this Easter. MAJOR SPOILERS AHEAD!

How many times must the Waynes die on screen??? Even though we all know how things turn out, it’s still emotionally horrifying to see Bruce’s parents get shot mercilessly in a dark alley. Just like a lot of the visual references in the film, Martha Wayne’s pearl necklace getting snagged on the killer’s gun is inspired by actual panels from Frank Miller’s The Dark Knight Returns. The scene where young master Bruce is surrounded by bats when stumbling upon the bat cave is also from the comic book.

Obviously, the Robin costume that Bruce gazes upon in the Batcave is painted with a taunt only the Joker could have delivered. This is a reference to the 1988 comic book “A Death in the Family”, where the Clown Prince of Crime beats Robin to death with a crowbar. There’s also the quote from Batfleck saying he’s had some relevant experience when it comes to “freaks dressed like clowns”.

Bruce has a weird dream sequence that hints at all things Apokolips. There are, of course, the weird flying things that have an uncanny resemblance to Parademons in the comics. Pllus, when Bats is standing over the desert-like place, there’s a very clear Omega symbol on the ground that heavily implies the existence of Darkseid.

Towards the end of the film, when Batman goes all Liam Neeson on Lex Luthor inside his cell block, Lex mutters something about someone out there who has heard the bell that Lex has rung, and that “he” is coming. There’s a lot of speculation that this is more proof of Darkseid’s imminent arrival (or maybe…Brainiac?).

Ezra Miller’s Flash is a goosebumps-worthy treat for fans right after that weird nightmare sequence. It appears as though Flash is traveling through time in this scene, and he’s wearing a more armored version of his costume in the vision that may or may not be Bruce’s dream. This scene is oddly reminiscent of the panels from Crisis on Infinite Earths, where Barry runs through the Speed Force to warn Bats of the upcoming, well, Crisis.

Flash’s message in Batman V Superman, while extremely cryptic, does sound a lot like the plot from Injustice: Gods Among Us. Flash reveals that Lois Lane is the key, and since Superman tells Batman in the nightmare sequence that “she was my world and you took her from me,” it’s not unlikely that, just like in Injustice, Lois will die and Supes will go cray-cray.

Flash also goes on to tell Bruce to “find us,” which is probably why Bruce tells Diana at the funeral that they have to go find the other metahumans and ask them to fight. I really hope this is where Bats’ motivation comes from, because there is no other reason why Batman would want to form the Justice League. In the comics, Batman has always been the one shying away from the team, so if it weren’t for Flash’s message, Bruce really wouldn’t have volunteered to form the League.

The message that Flash delivers seems legit, too. It couldn’t have been just a dream, because when Bruce wakes up, sheets of paper and other debris are still fluttering to the ground all around him, suggesting that the Flash’s appearance is an actual vision and not just his imagination.

5. The Justice League of America

So, I’m pretty sure everyone knows about the whole Justice League reveal that’s shown when Diana browses through Lex’s secret files. There’s Diana herself with Chris Pine’s Steve Trevor, Flash halting a robbery in a convenience store, and Jason Momoa’s Aquaman speeding through the deep blue sea like the true aquatic king that he is.

What’s interesting is Cyborg’s clip, where the S.T.A.R. Labs footage shows Silas Stone experimenting on his son. I’m pretty sure the floating cube-thing that merges with Victor is a Mother Box, a sentient computer from Apokolips—more proof that Darkseid will probably be involved soon.

In the fight scene between Supes and Bats, they wreck through an abandoned area where pillars of graffiti are all over the place. There’s a very prominent question mark in there that’s a Riddler trademark, so we could be seeing him in the future films, too.

In a film that’s titled Batman V Superman, the best scene of the movie for me is Batman V A Bunch Of Random Thugs—not really against the Man of Steel. When he goes on a one-man crusade to save Martha Kent from the bad guys, Batman goes full Chuck Norris and uses a variety of techniques that any avid gamer from the Arkham trilogy games franchise will recognize. There’s the flash grenade, the Batarang combos, and even the surprise takedown where Bats takes advantage of weak structures to ambush enemies. I could almost feel the Playstation controller in my hand as I watched that scene.

With Doomsday in the picture, it’s a pretty predictable move to kill Superman off in a battle to the death just like in the comic books. Superman’s coffin in the movie is painted black with a silver “S” logo, too, just like his costume was when he came back in the comics during the Death and Return of Superman arc.

A lot of viewers also swear that they heard some sort of heartbeat towards the end when the camera was zooming in on the coffin, and this might just be a play on The Dark Knight Returns when Bruce faked his death and Superman heard his heartbeat thumping underground.

J.J. Abrams and Zack Snyder poked fun at each other during the filming of their respective movies, and fans couldn’t have been more delighted. In Batman V Superman, Snyder makes another Star Wars reference when Lex’s prison garb has the number 16-TK421 on it. This code actually belongs to the Stormtrooper disguise that Han Solo and Luke Skywalker had back in A New Hope.

So that weird CIA agent at the beginning of the film was actually effing Jimmy Olsen. Guess he’s not just a goofy photographer anymore—Perry should have given him a raise.

And speaking of Perry, when he yells at Clark that “it’s not 1938 anymore”, that year is supposedly when the Daily Planet was founded in the movie. In real life, though, that’s the year that Superman made his first appearance and comic book debut with Action Comics #1.

In Captain America: The Winter Soldier, actor Callan Mulvey played a villain that’s kinda similar to his role in Batman V Superman. As DC Comics’ villain KGBeast, he’s also appeared in a few episodes of the TV series Arrow, and when he tells Batman that he’ll kill Martha if Bats doesn’t back down, it’s very similar to what happens in The Dark Knight Returns. A gunman in the comics is threatening to kill a child, and then Batman goes, “I believe you,” just like he does in the movie.

Some hardcore fans swear they saw “Quis custodiet ipsos custodes?” in the graffiti-filled wreck of the World’s Finest’s battle, but I honestly didn’t spot it. What’s notable though is that Nite-Owl Patrick Wilson plays the President of the United States in the film, Carla Gugino voices the guide for the Kryptonian Scout Ship, and Jeffrey Dean Morgan plays Thomas Wayne, who once again gets killed off in the very first scene of the movie, just like he did as The Comedian in Watchmen.

I’m positive there are still some hidden details out there that I’ve missed, so if you’ve got more Batman V Superman Easter eggs that I haven’t found, sound off in the comments below!