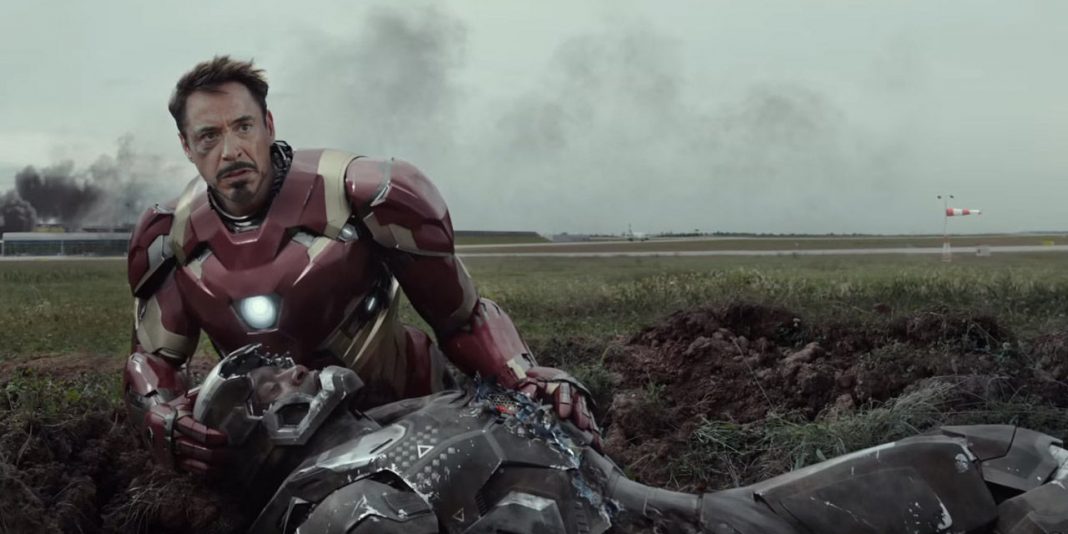 As a lifelong DC Comics fan, it always pains me to see just how much better Marvel is doing when it comes to blockbuster movies. But, as usual, the brilliant and insanely creative minds over at Marvel have bested DC again with the epic Captain America: Civil War. It’s the absolute truth—and hey, the truth hurts. A warning for this Civil War review: MAJOR SPOILERS AHEAD!

Fresh from the destruction brought about by the previous movies, our favorite Avengers are now taking the heat from all the devastation they’ve caused in New York and Sokovia. There’s a heavy, oppressive, and suffocating guilt looming over them especially when Tony encounters a bereaved mother who has lost her son in Sokovia due to all the death from above. This prompts the world leaders to demand that these unbridled superheroes be monitored, supervised, and kept on a leash—also known as to be completely controlled by the government. While Tony Stark is all for it, the ever noble Steve Rogers is anything but. And so begins the clash that will split the superhero community—and various overly heated fanboys—down the middle into Team Iron Man and Team Cap.

Prior to seeing the movie, I was curious as to how the studio will handle the Superhuman Registration Act at the heart of the Civil War comic books, because there was never really any emphasis on secret identities in the previous movies of the MCU. But somehow, they’ve gone and pulled it off, making Captain America: Civil War happen without the iconic public revelation of secret identities.

What I positively loved about the film is that the conflicts are not at all forced. Sure, we’re all expecting Tony and Cap to go head-to-head in a bout to see who’s got the bigger guns, but the writers did an extraordinary job of making the tension build up and escalate to that trailer-iffic airport brawl. Unlike the quarrels between our heroes in the previous films, where I felt like the actors were arguing just because the director said so, the opposing sides in Captain America: Civil War both have their own very valid points. You can clearly see that they don’t want to fight, but principles should be stood by and ideals fought for. It’s not just random testosterone flying all over the place—the gradual and practical progression of emotions rising actually feels authentic.

This makes the clash of the titans even more legit. Even their epic fight at the airport (which, I bet, caused horrific delays to ordinary citizens who just want to get to their destinations on time) feels like they are just rough-housing in the sandbox, and it is enjoyable and entertaining as hell. 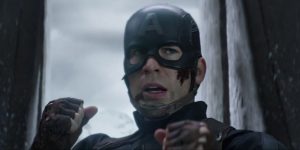 Speaking of fight scenes, the Russo brothers also did a fantastic job with all the action. The fights are not just mindless beat downs. The blows are calculated, the styles strategic, and the fights incredibly well-choreographed. How many ways can you really wield a shield? As formidable as Cap’s enemies are, they’ve got nothing on Steve’s tactical moves. It almost feels like each superhero has his or her own private set of specific moves ala-Street Fighter style, where they’re fighting intelligently and not just randomly trying to hit something.

And if you’re thinking that the film is over-saturated with too many characters all in one movie, think again. Each superhero has the right amount of screen time, and the movie makes good use of the characters and effectively makes them integral to the plot. They’ve got a little Wanda-Vision thing going on, too, staying faithful to their romantic relationship in the comics. Falcon’s Redwing is now a sort-of drone-like thingy that he can control as opposed to the actual falcon in the comics, and badass Frank Grillo gets blown off in the first few minutes of the film (yes, Scarlet Witch kinda blows him up, taking down a whole section of a building along with him—the Avengers have always been cold-hearted serial killers). While I would have liked to see more of Crossbones in the movie, the actual baddie here is Baron Zemo, who orchestrates the superhero clash in the first place. He’s nothing too terrifying, but the point of the movie is all the fighting amongst each other so he sort of just stands in the sidelines and that’s totally okay. 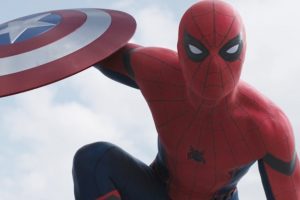 Since we’re all about the characters, it’s time to talk about the newbies. If there was ever any doubt that Tom Holland could pull off your friendly neighborhood Spider-Man, this movie certainly puts all those naysayers in their place. Spidey’s age is just right, his talkative banter is perfect, and his quirky demeanor is exactly what we’ve been waiting for all these years (sorry, Dancey Tobey and Emo Andrew). He also references taking down the AT-ATs at the Battle of Hoth in Empire Strikes Back, which is really just world-dominating Disney subtly winking at us that yes, they own the Star Wars franchise, too. This tactic is suggested by Peter Parker when he’s telling Tony how to take down Giant-Man, because yes, Ant-Man can grow now and it is just epic (special thanks to that Giant-Man Lego set that spoiled it for all of us before the movie even came out).

Newcomer Black Panther had my jaw dropping to the sticky cinema floor everytime he made an appearance, and even though he’s not as popular a character as the rest of the Avengers, he’s not afraid to kick some serious behinds to show that he’s not some second-rate character that was unearthed from out of nowhere. I especially loved the feline way he moves and delivers his blows, with that cat-like stance and his get-those-pointy-things-away-from-me claws. Add that to the vibranium-lined suit and you, too, will realize that it’s time to hail the king. 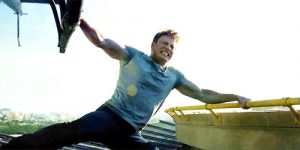 Still, the best thing about the movie for me is that it never fails to remind you that this is a Captain America film, and a damn good one at that. Sure, you’ve got all these superheroes flying around, but they’re all just distractions. The main highlight of the film is still Steve Rogers, and unlike the Man of Steel who was sadly tossed aside when the Caped Crusader came into the picture in Batman v. Superman, this movie is still all about Cap and the difficult duty-bound decisions he makes during the whole thing. His action scenes are the best, and if you’ve already seen the film, here’s something: biceps. Cap’s gratuitous money shot and love affair with a helicopter is all there really is to see.

There are beautiful little touches of authenticity scattered here and there throughout the movie, like Tony bracing himself before bravely trying to take on a mind-controlled Bucky with only his hand armor on, and Rhodes helplessly plummeting to seeming death when his suit goes offline. There are moments where you can take a welcome breather from all the action with Paul Rudd’s adorable humor. Then, in what’s arguably the best scene of the movie for me, Cap kisses Sharon Carter while Falcon and Bucky watch from the parked car nearby. In true bro fashion, they both give him a smirk of approval, and that small second of awesomeness shows the humor that Marvel has always been incredibly good at. 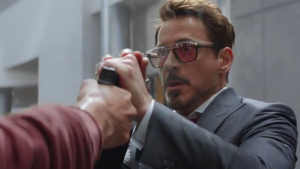 Lastly, we can’t end Captain America: Civil War without mentioning how fab Stan Lee was. This time, he plays a FedEx employee who mistakenly pronounces Tony’s name as Tony Stank, which is, honestly, something that I believe will catch on until the end of time.

If it isn’t quite obvious by now, I have nothing but good things to say about Captain America: Civil War. It’s the superhero film we’ve all been waiting for, and it’s just as awesome as expected. This is perfect proof of how bringing superheroes together and pitting them against each other can be extremely effective if and when it’s done properly, and if you build them up well, it will be as satisfying as a fresh round of shawarma from Tony’s fave Persian joint. 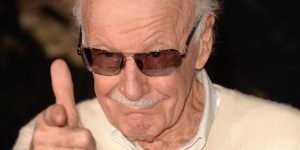 Side note: A true MCU fan should know that you oughta stay for the mid-credits and the post-credits scene, and while I was perplexed that there wasn’t any Dr. Strange love in any of the clips, I’d still like to know which after-credits scene you guys all got. It supposedly differs per region, so lemme know what you guys see in your theaters in the comments below!