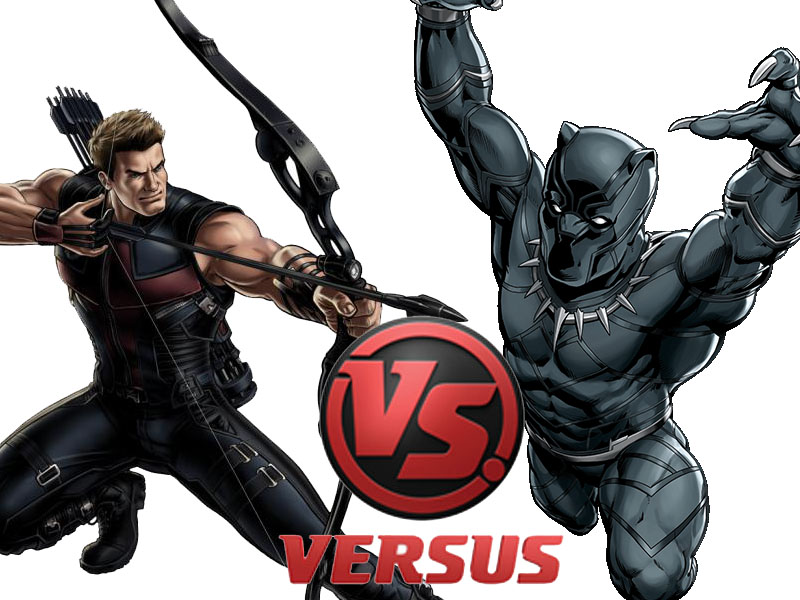 Our second round of Captain America: Civil War matchups find us with a pair of heroes who didn’t have a natural fit with anyone else. That’s right, Hawkeye vs. Black Panther is the odd man out fight.

After Spider-Man, the appearance of Black Panther in Civil War has done the most to get fanboy pulses racing. Knowing that there is a solo Black Panther movie waiting in the wings puts a fair amount of pressure on Chadwick Boseman AND Marvel to get him right this time out makes me very, very happy. We will see how they do.

First up? Powers! Well, Hawkeye doesn’t have any. Black Panther has a whole slew as a result of eating a magic herb. So, based solely on the many versus the none aspect of this one, we’ve got to go with the Panther.

Next? Let’s look at the gear. Hawkeye has access to cutting edge tech from both SHIELD and Stark Industries. How does he chose to use that tech? Arrowheads. Black Panther uses his country’s store of Vibranium and his genius-level IQ to create his battle suit, claws and other weapons/gear as necessary. This one is closer, but I’m still going with Panther. He’s not beholden to anyone else to keep him in cool toys.

Finally today, let’s look at fighting ability.  As I said before, Hawkeye is a trained SHIELD agent who, since SHIELD was (kinda) dissolved, has been training with Captain America. He’s not afraid to use a dirty trick when it gets the job done. Black Panther has often been portrayed as Marvel’s answer to Batman; he plans for any and all eventualities.  However, he’s bound to a code of honor that can hinder him in combat. He might know what Hawkeye’s going to do, but he may not allow himself to stop the attack if it requires him to fight dirty. Advantage, black ops.

So, at the end of today’s battle, claws beat arrows and, really, it’s not even close.

Scarlet Witch vs. The Vision!