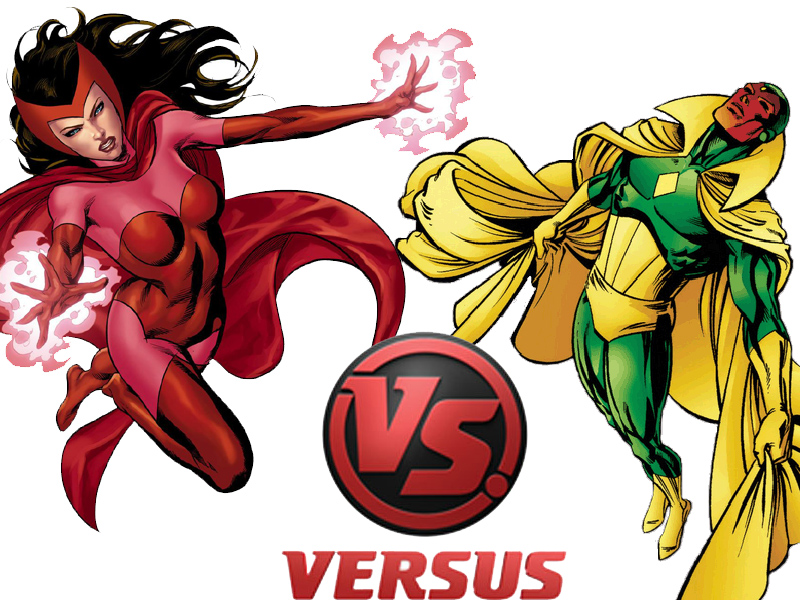 We’re back for the third round of our Captain America: Civil War fantasy face-offs. So far we’ve seen Spider-Man and Black Panther come out victorious. Today’s pairing is one as old as time; it’s Man vs. Woman, Husband vs. Wife and Android vs. Mutant/Inhuman. Okay, maybe that last one isn’t as old as time. Today, for your viewing and arguing pleasure, it’s The Vision vs. Scarlet Witch.

The Vision is an android with the consciousness of Tony Stark’s JARVIS operating system. He was instrumental in defeating Ultron in Avengers: Age of Ultron.

Scarlet Witch is either a mutant or an Inhuman depending on what continuity you believe. In the MCU, she’s an Inhuman, the result of experiments by Baron Von Strucker.

Fun fact: in the comics, Scarlet Witch and the Vision were married for years. They even managed to give birth to twins who ended up being parts of the lost soul of Master Pandemonium.

Their marriage eventually ended so that must mean it’s time.

First up, the battle of the powers. In the comics, Scarlet Witch has the ability to manipulate reality and/or chance with her mutant hexes. There has been no indication that she has these powers in the MCU. Too bad for her. Her hypnosis and telekinesis powers, while impressive, simply aren’t enough to take down a synthetic man with the power of the Mind Stone in his possession. Add in Vision’s tendency to use his density control powers to solidify part of his arm inside his opponent for actual shock value and I think this one goes to the android.

Next, let’s talk about motivation; that’s going to be a key factor in Civil War. Vision is on Team Iron Man because he owes his existence to Tony Stark. He served as his virtual majordomo for years before getting a chassis upgrade.

Scarlet Witch fights because of the loss of her parents during war in Sokovia. A war that was fought with Stark Industry tech, which was one of her prime motivations in Age of Ultron. I don’t think she’s going to forget how she got here once Stark starts calling for registration.  So, blind loyalty or vengeance? I think the Witch has this one.

Finally, I think we have to discuss stability. In Age of Ultron, Scarlet Witch was shown to be quite unstable, a characteristic she shares with her comic doppelganger. She did not respond well to stressful situations. What’s more stressful than a Civil War between super-powered beings? Not much. The Vision on the other hand is a highly advanced AI powered by an Infinity Stone. I can’t imagine much is going to shake him. The Droid wins again.

YOUR WINNER:  THE VISION

So, in the final count, the Vision comes out on top simply by being a highly advanced machine. Now, if Rick Deckard joins Team Cap, we may have to reopen the discussion.

Tomorrow’s Tale of the Tape?

Black Widow vs. The Falcon