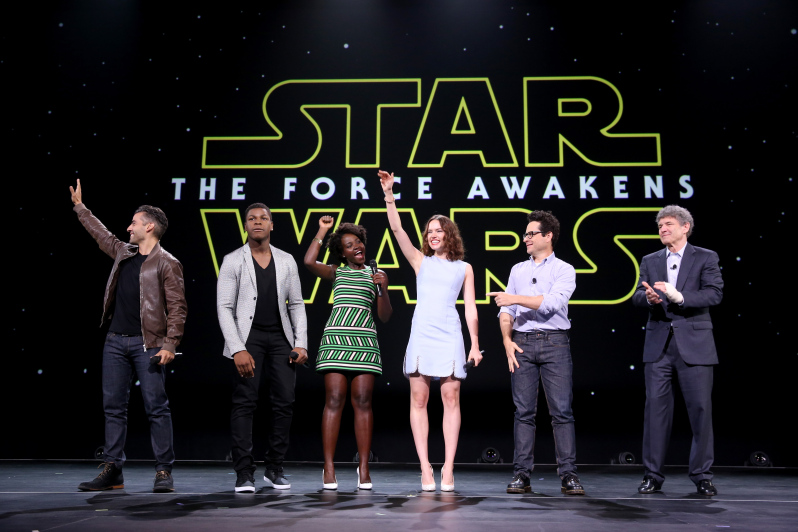 Well, the official embargo forbidding the release of full critical reviews for Star Wars: The Force Awakens has been lifted. Yep, Darth Vader was commanded to release his Force-produced choke hold on the whole of critical media, and surprisingly, he obeyed.

Earlier this week, we reported on the initial Twitter-shared reactions of actors and critics lucky enough to attend the Star Wars: The Force Awakens Hollywood Premiere (click HERE for the full article detailing the various, POSITIVE Twitter reactions). As the writer of that specific article, I held my breath before taking in the tweets shared by respected members of the entertainment community, prepared for a deluge of disgust or the mumblings of uninspired mediocrity. Well, if you read the article (which I linked to earlier for your convenience), you know the reactions were positive. Ridiculously positive. YAY!

WHEW! It seemed the first obstacle was successfully conquered; people who saw the movie were not only happy with the film, they left the theater feeling better about themselves and the world around them! NOW THAT’S A MOVIE! But then a dangerous, subversive thought started swirling about my brain: when the embargo is lifted, and full reviews are posted by a host of capable critics, will the positivity continue? Will Force Awakens truly hold up to those a bit more detached and able to focus a clearer, unbiased perspective on the latest Star Wars installment? The answer: YES (mostly)!

The critics chimed in, and for the most part, the reviews were steady in their positivity. There were a few…let’s call them ‘detractors’…that questioned some choices, and a few that were only moderately uplifted, but for the most part we’re still in the green. YAY! Okay, enough with the slow-burning build-up; let’s see what the critics had to say!

“J.J. Abrams’ The Force Awakens delivers exactly what you want it to: rollicking adventure wrapped in epic mythology, a perfect amount of fan service that fires your geekiest synapses, and a just-right cliffhanger ending that paves the way for future installments.”

“Despite the prerelease hype, it won’t save the world, not even Hollywood, but it seamlessly balances cozy favorites – Harrison Ford, ladies and gentlemen – and new kinetic wows along with some of the niceties that went missing as the series grew into a phenomenon, most crucially a scale and a sensibility that is rooted in the human.”

“Abrams has done stellar work by casting actors who will be unknown to most filmgoers but who shoulder their responsibilities with skill and confidence. Daisy Ridley resembles the plucky younger sister of Emma Watson and Keira Knightley as Rey, a scrappy, steampunk-ish scavenger who befriends a wandering soldier named Finn (John Boyega). Oscar Isaac brings just the right amount of cocksure street smarts to his role as Poe Dameron, and Adam Driver is similarly right-on as a shadowy, somewhat simian figure named Kylo Ren.”

“The Force Awakens leans heavily into shades of Star Wars past and isn’t shy about that in the least. There are visually spectacular dogfights between X-wings and TIE Fighters set to John Williams’ sparkling score; another overarching bad guy who uses holograms, Supreme Leader Snoke (played via motion capture by Andy Serkis), a nasty figure along the lines of the late Emperor; and Starkiller Base, which makes the Death Star look like a Fisher-Price My First Space Battle Station.”

“Risking heresy, it’s worth noting that Abrams actually did smarter, more inventive work on his 2009 reboot of Star Trek, no doubt in part because he was working with a less heavily guarded enterprise. Star Wars, at once a cultural juggernaut and a sacrosanct institution, resists any attempt to reimagine its landscape too aggressively or imaginatively; that may be to the detriment of this diverting first effort, but Abrams has more than stoked our anticipation for what his successors may have up their sleeves.”

“It’s a very good movie, I’d say, and should entertain audiences both deeply and casually invested in the ongoing saga of the Skywalker family. Made with a profound sense of passion and respect by an entire generation of filmmakers and performers who were influenced by the original films, this is a deeply affectionate film, and that affection, that honestly felt love, is what is going to make all the difference for viewers.”

“The Force Awakens is the Star Wars movie for remix and remake culture. It’s not a remake or a reboot, but it’s a movie that tells a story not entirely dissimilar from the original Star Wars, except that many of the familiar beats and moments have a spin put on them.”

And there you have it! Mostly positive! YAY!